IndieWire spoke with the director and star of this buzzy Midnight Madness selection, which almost didn't make it to the screen. 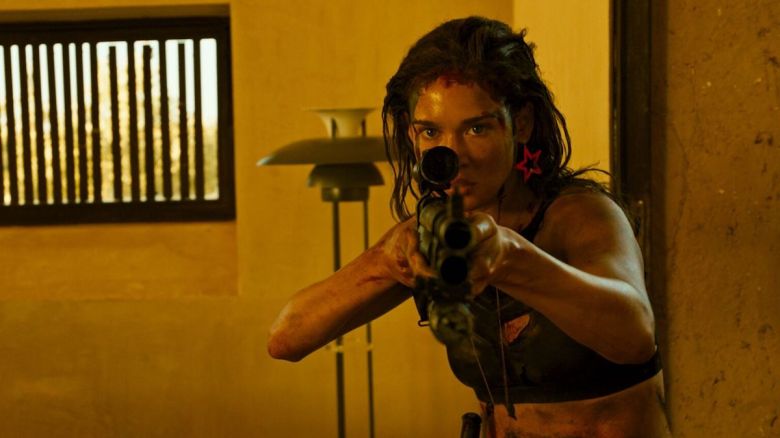 It’s called “madness” for reason. Each year, the Toronto International Film Festival plays home to its long-running Midnight Madness section, which unveils the best of up-and-coming genre cinema to scores of fans looking to be thrilled and chilled during midnight screenings at Toronto’s Ryerson Theatre. Big reactions are de rigueur, though some are a bit bigger than others.

This year, that particular spotlight belonged to Coralie Fargeat’s feature film debut, “Revenge,” which bowed on Sunday evening, and rendered at least one attendee unable to stomach the full force of the Western-styled revenge tale of a woman done very, very wrong. The Globe and Mail confirmed that one audience member fell “unwell” during the screening — initial reports claim that they suffered a seizure — and was quickly attended to and hustled out of the screaming. (At its own midnight premiere last year, the cannibal coming-of-age story “Raw” made at least one audience member pass out.)

No one was more surprised than Fargeat and her leading lady Matilda Lutz, who were both in attendance at the premiere. “We started to hear someone say, ‘hello, hello,’ from the audience,” Fargeat explained to IndieWire at the festival. “I didn’t know if it was someone making [a joke] in the room, then I see the paramedics in the cinema. Apparently, from what I’ve been told, a guy had a seizure. But I think he’s fine!” (He is.)

The incident happened after a particularly harrowing scene — in a bloody, brutal, and deeply satisfying outing that provides plenty of them — when one character is forced to remove a sizable glass shard from his foot. Fargeat believes that the seizure was brought on from the intensity of the scene, and Lutz herself admitted to feeling queasy during that same moment.

As intense as the experience may have been, it speaks to the kind of reaction Fargeat is hoping for when it comes to her film. “I was really hoping that people would get into the story, and more than the story, which is kind of basic, into the universe and the atmosphere,” she said. “Being in that quest, going more and more mad, and being more and more crazy and violent and hot and sweaty. I really hoped that people would go deep into it.”

The aptly-named feature follows Lutz as Jen, initially drawn as a shy wallflower who is desperate to be loved (especially by her boyfriend, played by Kevin Jannsens), who is pushed to wild extremes when she’s violated by the man she loves and his loutish group of friends who unexpectedly descend upon what was meant to be a quiet weekend away. Jen’s rage is complete — and complex — and the heavily genre-influenced film finds both its fun and shock value in her sudden evolution into a badass final girl for the ages. For her feature debut, Fargeat wanted to craft something that came, in her own words, “completely from my imagination, and build a world and a universe.” Her primary challenge was building a character like Jen, who undergoes a total transformation over the course of the film, a character arc so profound that it allowed Fargeat to make an entire film around her.

“The film was going to rely on the shoulders of the actress, and she had to be able to really handle the movie,” the director said. “I knew the shoot was going to be exhausting, we had not much time and it was very physical. Everything was difficult on set: the gun was heavy, sometimes it was cold, sometimes it was hot, she was barely clothed. Everybody was harmed in a way.”

Fargeat and Lutz met early during the casting process, and while they sparked to each other, the filmmaker cast another actress for the role. That didn’t last.

“The actress that was attached to the project got scared and quit,” Fargeat said. “I think she got scared of the part and scared of the process. We were very close to shooting, and I remembered the audition I had with Matilda, and something she told me: ‘The first moment I met you, I really trusted you.’ I knew I had to work with an actress that would completely trust me.”

Fargeat reached out Lutz and the actress immediately accepted, even on such short notice. She remembered those first meetings, and she also remembered why she wanted the part to begin with: because of Fargeat.

“The first thing was her,” Lutz said. “I didn’t know anything about the project, I hadn’t seen her work prior to that…We just started talking for like an hour and a half, it felt like I knew her already. It didn’t feel like I was meeting someone new. I just felt like I was myself. That was the first impression.”

She added, “What I loved was the fact that she cared. She knew exactly what she wanted.”

Like her director, Lutz also sparked to the possibilities afforded to her by the role — the actress compared it to playing two entirely different parts — that goes through such extreme changes over the course of the film. Because of her last-minute casting, Lutz didn’t have the chance to prepare in normal ways (she did, however, make the time to read a biography of Marilyn Monroe, who she says heavily informed the way she played first-act Jen), instead plunging right into the project.

“It was really about trust, I felt free and comfortable and safe,” Lutz said. A particularly difficult scene, set in a cave, was so tough on Lutz that Fargeat talked her through the entire take, guiding her through both actions and lines. If it sounds hard, Lutz and Fargeat are clear, it was, but it was that early and easy trust that pushed them through.

“The movie was a real bet,” Fargeat said. “It was so not easy to make, we had to fight for everything to get it done…I wanted to surround myself with people who would really trust the movie and keep fighting for it. It was a matter of faith for everybody who got involved in the project. It’s such a reward to get the recognition, ‘okay, yes, your movie exists and people are looking at it.'”

“Revenge” had its world premiere at the 2017 Toronto International Film Festival. Shudder will release it in theaters and streaming in early 2018.