Only a show like "Rick and Morty" could pull off a cliffhanger this satisfying for fans. 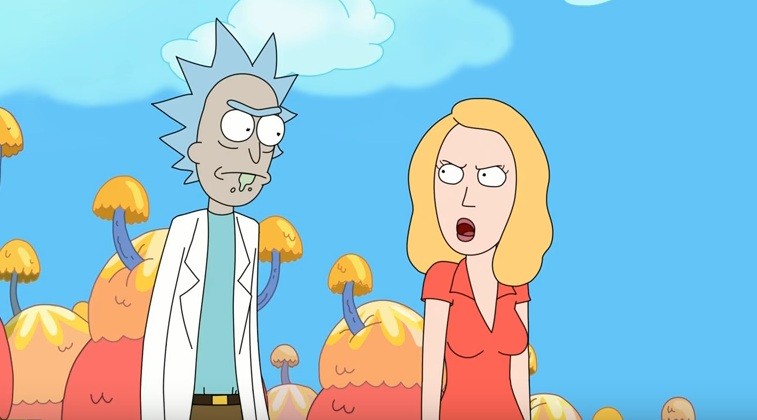 “Rick and Morty” Season 3 has been defined by thrilling narrative risks (see “The Ricklantis Mixup” and “Morty’s Mind Blowers”), so it was a bit of a shock to see the show return to its more traditional A-story/B-story structure in its penultimate episode, “The ABCs of Beth.” The episode may have felt a little safe in terms of narrative, but it represented a huge milestone for Rick and Beth, the father and daughter whose tumultuous relationship has given the series one of its defining emotional arcs.

Beth took center stage with her own adventure in “The ABCs of Beth,” and the storyline acted as a payoff to the groundwork laid in “Pickle Rick” earlier this year. In that episode, Beth took the kids to therapy in order to help them process her divorce from Jerry, but the session ended up serving as a reckoning for Beth’s own disappointment with her father. The two have struggled to connect since the pilot episode, but “The ABCs of Beth” finally saw Beth locate the true source of her paternal frustration, and the answer led to one of the show’s most fulfilling cliffhanger endings.

Read More: ‘Rick and Morty’ Review: ‘The ABCs of Beth’ Is a Touching Father-Daughter Adventure Drenched in Plenty of Alien Blood

Beth and Rick’s typical bickering throughout the episode led to a relationship breakthrough three seasons in the making. Beth finally came to terms with the fact that she is just like her father and that her anger, frustration, and overall disappointment with the world is because she sees it just as Rick does. Beth’s emotional turmoil isn’t because of Rick’s actions, but because she has refused to make peace with the fact that she is more like Rick than she wants to admit. After all, Beth is the kind of person who would choose to kill her old childhood friend and clone him rather than take any kind of personal responsibility and apologize to him for her mistakes. Like father, like daughter.

Admitting to herself that she’s just like Rick gave Beth the ultimate “Rick and Morty” enlightenment of nihilism: Being the smartest person in the room means realizing that everything is meaningless in the end. Such a breakthrough brought Beth and Rick closer than ever, with Rick even managing to let out his version of an “I love you” that did not have a single rude or demeaning follow-up. The newfound connection between them was reinforced by a kind of cliffhanger-as-resolution that only “Rick and Morty” could pull off successfully. Rick made an offer to clone Beth so that she would no longer have to waste her days dealing with the meaningless demands of motherhood and suburban life; instead, she would be free to wander the multiverse and engage in life-fulfilling adventures while her clone takes care of her real world duties. Beth made a decision, but viewers never got to hear or see exactly what it was. The final scene of the episode featured a very happy and loving Beth and Rick sitting down for dinner with Morty and Summer, but were these the Beth and Rick we’ve known for three seasons or the clones we’d never be able to tell were their replacements?

Creators Dan Harmon and Justin Roiland intentionally did not give us an answer to this burning question, and if you’re a fan of the show then you know they may never give us an answer. The problem with cliffhangers on “Rick and Morty” is that they are useless from a narrative perspective given that the show’s mythology is so flexible. Harmon and Roiland can fix a cliffhanger in an instant if they wanted to, and chances are more than likely they’ll never give us a resolution. For this reason, cliffhangers don’t elevate the narrative stakes of “Rick and Morty” the way they would on a traditional drama or sitcom.

The show has kept the “Inception” top spinning in terms of Beth’s real fate, and yet the cliffhanger remains deeply satisfying nonetheless. Unlike dangling story threads in past episodes (Evil Morty was revealed to be President Morty in the “The Ricklantis Mixup”, for instance, but fans are now endlessly waiting for a resolve and will certainly be disappointed if one doesn’t come in next week’s finale), “The ABCs of Beth” cliffhanger succeeds because it makes a definitive emotional point that trumps the open-ended plot question. No matter how the cliffhanger is resolved — Beth and Rick are finally bonded after their adventure and can admit their love for one another, or Beth and Rick are out adventuring together and have left their daily duties in the hands of their clones — the emotional end is the same. Beth and Rick are finally connected. No matter what happens plot-wise, this much is true emotionally.

There’s enough evidence to support both possible outcomes. Beth loves her children, and she even looked at pictures of them on the refrigerator when she tells Rick that she has made her decision. Would Beth really ever abandon her family? Optimists would surely hope not, and fans certainly want to believe the joy she expresses in the last scene is genuine. But Beth is also just like her father, and Rick did abandon her as a child. We have two possible outcomes, but each one finds Rick and Beth connected in the same way. It’s almost as if Harmon and Roiland created the anti-cliffhanger; they kept the plot spinning while bringing to a close one of the show’s defining emotional threads.

The power of this cliffhanger is that the only truth that comes out of it is an emotional one. So much of “Rick and Morty” is reflexive, and at this point the show knows how pointless cliffhangers can be in regards to storytelling, so the writers went ahead and redefined what a cliffhanger should be. Rick and Beth finally see eye-to-eye after a lifetime of bickering, and that won’t change based on whatever Beth decided. If only every cliffhanger could be this satisfying.

This Article is related to: Television and tagged Dan Harmon, Rick and Morty, The ABCs of Beth