Frightening, moving, and existential, this pantheon-level episode takes a detour to The Citadel for a twisted, self-contained tragedy. 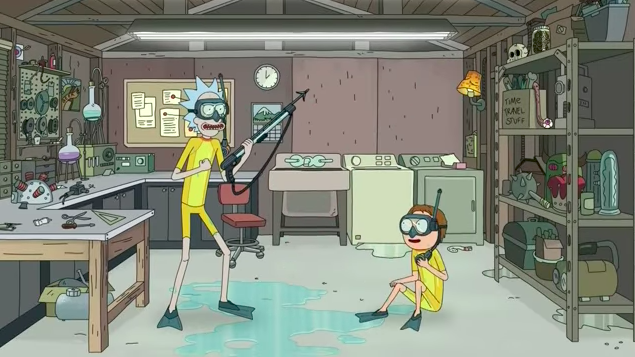 If anyone was afraid that the end of “Twin Peaks” signaled the disappearance of insane Sunday night TV storytelling, the kind that makes you scream into the living room void shouting “WHAT JUST HAPPENED” with the pure intensity of a person reckoning with their own hallucinations, let me tell you about a little half hour of television called “The Ricklantis Mixup.” The ideal animated complement to Lynch’s “Part 8,” it’s a wry, impossible-to-fully-digest bit of mythologizing that builds up a multiverse worth of individual story threads before lighting them as the fuse to explode the story’s own premise. This is “Rick and Morty” at the height of its power, delivering zaniness and gut-punch existentialism with equal fury and glee.

Like so many standout “Rick and Morty” episodes, capturing the essence of what made this more than a loosely connected bit of cultural flotsam and jetsam lies in its ability to laser in on character beats at lightning speed. A breakneck-paced “Rick and Morty” if ever there was one, “The Ricklantis Mixup” jettisons the usual opening credits in favor of a sitcom-style city montage of life at The Citadel, the intergalactic, city-sized fortress of Ricks and Mortys that our heroes left for ruin at the start of Season 3.

Read More: Every Episode of ‘Rick and Morty,’ Ranked

As Rick and Morty Prime go off on an unseen tour of the lost city of Atlantis, day-to-day life at The Citadel takes full focus, from the workers at a candy factory to the inner workings of a dark horse campaign to put Citadel power in the hands of a Morty. As an entity in search of an identity following the assassination of the governing council, The Citadel is in the midst of a presidential election, one that will decide the future of thousands of Rick and Morty variants living within its borders.

Elsewhere, a quartet of school-aged Mortys go on a search for meaning and fulfillment. (As fans parse out this episode, the idea that these four follow the “Stand By Me” character breakdown while being taught by a Hogwarts-adjacent Rickstructor and it somehow makes thematic and visual sense shouldn’t go unnoticed.) The aforementioned factory worker leads a hostage revolt against his corporate overlords after being passed over for a job promotion (in favor of Cool Rick, no less). Cop Partners Rick and Morty ride along the criminal underworld of The Citadel, investigating drug dens and strip club fronts, all while balancing out their inherent distrust for each other.

This isn’t a show that rests on recreating familiar visuals as the only means to a joke. When Candidate Morty gets shot by his former campaign manager, the overheard zoom out shot lingering on the aftermath isn’t just a recreation of the end of “24” Season 2, it’s a stylistic nod to a bigger commentary on centralized societal control. Rebellious sleeveless Morty isn’t just cashing in on viewers’ affinity for River Phoenix in a Stephen King adaptation (“I’m part of an experimental line of Mortys with a drama implant”), it’s using a viewer’s nostalgia for that character as a means for a bigger gut punch when he hops into the glowing green portal.

It’s a shortcut, yes. But a supremely effective one. This season, violent deaths (whether by the unwitting hands of children or by the hands of a rat super-skeleton) have also been a quick way to employ the show’s specific brand of pathos, showing the dangers that this sci-fi world has for anyone who inhabits it. That laser gun in the mouth of a loitering Morty, the disintegrated frame of a bootleg portal fluid maker, and that last shot of murdered bodies floating in the emptiness of space — those are the show’s way of underlining that even in a wacky potpourri of one-off genre riffs, there are real consequences to the whims of the individuals at the top. Now, whenever Rick and Morty shirk off the chance to save a galaxy in trouble or a distant dimension in need, this adds weight to the characters they leave behind.

Even in Factory Rick’s desperate plea to escape judgment at the hands of Citadel police, the unseen ravages of the Blender dimension tell a story all their own. Heck, even the phrase “Flavor Core” carries with it so much unspoken intrigue. “Rick and Morty” knows how to ask more questions than it answers when it comes to the details and logistics of worlds behind those portals. Now, with nearly three seasons of adventures to build on, these parallel dimensions are all ripe for the kind of granular storytelling that we see here, the diversions that add so much to our understanding of the full range of philosophical quandaries and daily troubles that each intergalactic citizen faces.

And the show is able to reference its past installments without being overly insular or self-referential. A viewer may not recognize that the end credits music is “For the Damaged Coda,” the same Blonde Redhead song that accompanied Eyepatch Morty’s Keyser Soze-like melding into the crowd at the end of “Close Rick-Counters of the Rick Kind.” Even without the realization that this same character now controls the interdimensional hub through which Ricks and Mortys (yes, even the Steve Jobs and trunk-nosed ones) gather, there’s a sadness to seeing the manipulation of a misled populace. Even if it’s in a tiny corner of an animated series’ mythology, this hostile takeover still has a heavy sense of tragedy to it.

Despite dealing with these heady themes in an intricately woven batch of storylines, “Rick and Morty” doesn’t sacrifice any of its trademark visual absurdity. Anyone who recognized the top hat logo on the Simple Rick’s bars was waiting for the eventual Wonka payoff. The buffoonery of the Citadel presidential debate balanced the thematically fitting Juggling Rick with a Rent is Too Damn High Rick (Rick is Too Damn High?), proving that Jimmy McMillan still has some cultural cachet left. And considering the show undoubtedly was in production by then, the Nightly News Rick Clones seem to have predicted the bizarre “Anderson Cooper interviewing future versions of himself” meme from last month, too. (This episode must have been a delight for the character design team. So many new Rick hairdos to cycle through!)

The preview clip for next week has a Rick aside about not having a third “Interdimensional Cable” episode. After “The Ricklantis Mixup,” it’s hard to see a need to ever go back to that premise when the show has now brought that concept to life in an unexpected and fulfilling way. This didn’t feel like a spliced-together string of hilarious voiceover recording session fun runs or a handful of excuses to redo classic TV tropes. Those certainly have their place (sounds like an ad-lib or two might have made it into the Stand By Mortys fireside conversation). But to have all of these storylines mesh without having to sacrifice a second of runtime to explain this episode’s unique logic, “The Ricklantis Mixup” proves how the best of “Rick and Morty” can satisfy on an emotional and structural level. It may take a while for the show to head back to The Citadel, but this is the kind of episode that won’t be leaving the show’s (or the audience’s) subconscious anytime soon.