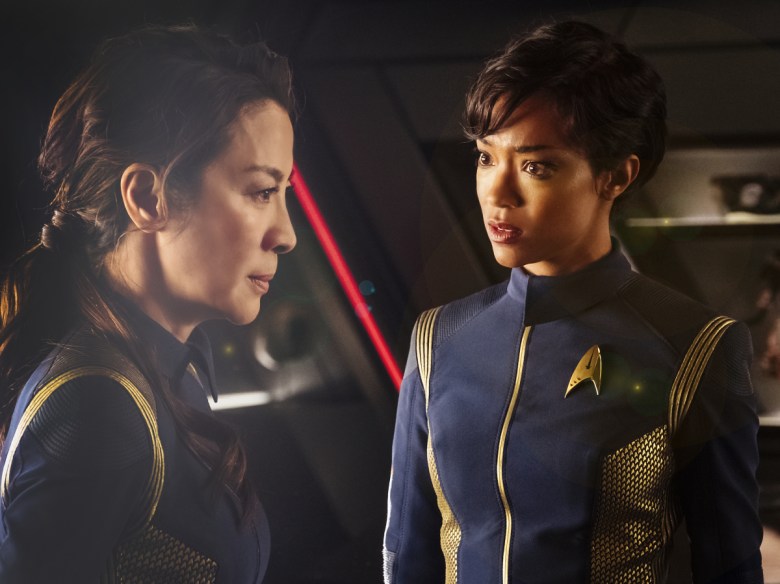 When it comes to CBS All Access’s “Star Trek: Discovery,” the show’s ambitions cannot be defined as modest. “We want to create a world that feels real, and dimensional, and authentic, and not just that reflect, I think, the complicated moral quandaries that define ‘Star Trek,’ but also that bring the audience into a very visceral approach to the feel of the universe,” executive producer Alex Kurtzman told IndieWire.

Fans tuning into the first two episodes Sunday night were in for a wild ride, as the newest iteration of the “Trek” brand subverted all expectations, killing Captain Georgiou (Michelle Yeoh) and sentencing Lt. Commander Michael Burnham (Sonequa Martin-Green) to life in prison as punishment for becoming Starfleet’s first-ever mutineer. Following these two episodes, the question becomes what’s in store for fans going forward — and while Kurtzman didn’t offer up any specific details, he was able to indicate what to expect from Episode 3.

“In many ways, Episode 3’s a reset of the show. It’s almost like a new pilot,” he said. “It isn’t until Episode 3 that the Discovery and its crew come into play, while Burnham has to live with the consequences of her choice. The audience has to ask, if she had behaved differently, would the war had been averted and would her friend still be alive?”

Don’t expect any satisfaction on that front. “We’re never going to give you the answer to that question. That’s something the audience has to decide, and I think the complication of that and its approach allowed us to feel like we could make a bold choice in the first two episodes, and set up a world that was both visceral, and emotional, and plotted the course for where her character’s going to go over the course of the season,” Kurtzman said. This was something Kurtzman said was part of the show’s design from the beginning, when he and executive producer Bryan Fuller (who left the series last fall) first began developing this new take on “Trek.” “Part of why we came to that idea is because it puts Burnham in a deeply complicated emotional situation right off the bat. She is Starfleet’s first mutineer. She feels responsible for the death of essentially of her best friend and surrogate mother, of the woman who tethered her to humanity when she was raised as a human on Vulcan, but taught to suppress all of that humanity,” Kurtzman said.

“At a story level, what we wanted to do was set you up to think one thing was going to happen, and then pull the rug out from under your feet by the end of episode two so that everything could feel very unpredictable from there,” he added. “We want to let the audience know that anything can happen.”

With that said, and given the death of Georgiou, should fans prepare for more casualties down the line? Is this a show where established characters might actually die? “Yes, it is, but no one is going to die without a good story reason. I’ll put it that way,” Kurtzman said.

Given that, and also given the fact that “Discover” may feel, on a structural level, significantly different from past “Trek” installments, Kurtzman is hopeful it still adheres to core “Trek” values. “The thing that for me makes ‘Trek’ ‘Trek’ is the relentlessly optimistic vision of the future,” he said. “The belief that a future exists in which we all, as humans and as species across the universe, can come together to form a better world and worlds. The minute you remove that from the equation, it’s no longer ‘Star Trek.’ I think now more than ever we need that vision.”

However, Kurtzman also acknowledged the fact that “Discovery” isn’t afraid to poke a bit at whether that optimistic vision is actually possible, though it’s for a good reason. “Nothing strengthens a vision of optimism like adversity. It’s easy to be optimistic when everything’s great. It’s much, much harder to be optimistic when you are up against something like war,” he said. “We felt like in order to make that message resonate now, we wanted to give it a context where the great things about ‘Trek,’ the moral quandaries, the ethical dilemmas, the things that make the television shows so enduring, really had a chance to shine.

“I feel like every day in the writers’ room, there are people there who were raised on many different iterations of ‘Trek,’ but are all really pointing in the same direction, and with a deep understanding of what message we want to say and what we feel ‘Trek’ is about,” he added. Despite this relatively new attitude, Kurtzman was clear on one thing: “Discovery” will always do its best to keep true to established canon. “I think that you must respect canon. I think, as fans, we know that if you disrespect canon you are somehow betraying the core of ‘Trek,'” he said. “If you’re not doing that, and you’re re-inventing just to re-invent, and the story choices that you’re making could or couldn’t exist… if you can’t tell the story without that element, then it shouldn’t be told that way. Hopefully fans will feel that way about the choices that we’re making here. We’re certainly endeavoring to be entirely consistent with Original Series canon, and I think that some of the bolder choices, hopefully, we’ll be rewarded for them, and if not, then it’ll be a source of debate and conversation, and that’s also part of what ‘Star Trek’ is.”

There are enough variations of “Star Trek” to ensure a variety of entry points for fans — a label that includes many of the show’s creative team. Some fell in love with TOS, some with the spin-offs — Kurtzman was personally hooked by the second feature film, “Star Trek II: The Wrath of Khan,” though he later came to appreciate other offshoots.

“Just the pure visceral and emotional storyline of ‘Khan’ really locked me in on ‘Trek,'” he said. “All my friends in high school were massive weekly fans of ‘Next Generation.’ I was not at the time. It wasn’t really part of my thing. It wasn’t until way later, when I discovered ‘Next Generation’ that I started to understand why my friends were such fans of it and fell in love with it, too.”

Nicholas Meyer, who wrote and directed “Wrath of Khan,” is also a consulting producer on “Discovery,” which means a lot to Kurtzman. “Getting to feel like we have his blessing on certain story choices is meaningful because it gives you the confidence to feel like, ‘Okay. We’re carrying a torch, but we’re only carrying it for a limited period of time,'” he said. “‘Star Trek’ does not belong to us. ‘Star Trek’ belongs to the fans, first and foremost. Always. But while we’re carrying the torch, are we making the right choices? Are we doing it for the right reasons? Are we pushing at the edges of canon in the right way while not violating it? Are we being true to what ‘Star Trek’ is? Nick is nothing if not totally honest, and brutally so sometimes, so it’s good to have that around.”

IndieWire spoke with Kurtzman just days before the show’s premiere, which he admitted was a scary moment, “where you realize you’re standing on the edge of a cliff and once you jump off it there’s either going to be a parachute or there’s not.”

This Article is related to: Television and tagged Alex Kurtzman, Star Trek Discovery