Executive producer Alex Kurtzman, star Kenneth Mitchell, and "the best Klingon speaker in Canada" reveal the level of detail that went into every moment the warrior race was on screen. 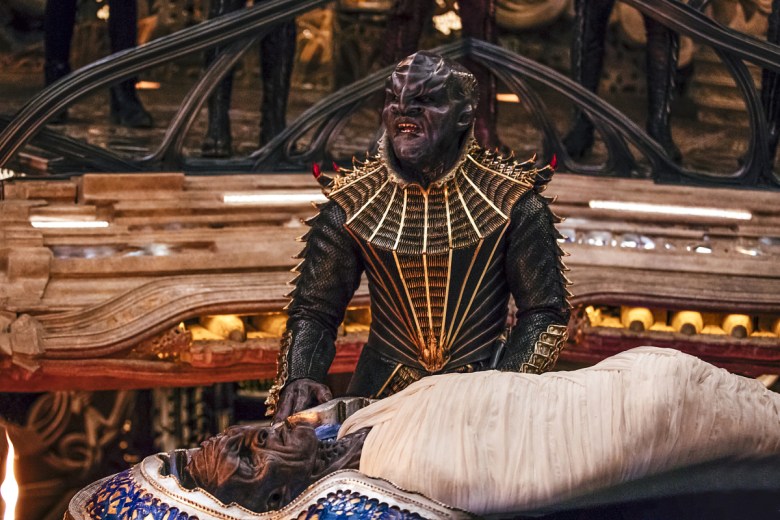 Kurtzman noted that Stewart’s job wasn’t done, once the scenes were filmed. “When you go through post, a lot of the time you’ll end up re-writing dialogue, which means Robyn would have to come in again and re-do the Klingon, and then the actors have to re-record the dialogue,” he said.

“I’ve gotten a phone call from a recording session where a vocal coach called and said, ‘Look, the actor’s really stumbling over this line. It’s a tongue twister,'” Stewart said. “And then I go, ‘Okay, I’ll change it.’ And then it has to get changed throughout the whole script. It’s not a simple process, where you just say, ‘Oh, Klingon-ize’ this. It’s the next level.”

Of course, there were other post-production considerations. “The actors tend to have to re-record all their dialogue anyway because they’re wearing Klingon teeth prosthetics, and so they’re often hard to understand,” Kurtzman said.

In addition, there was a digital tweak made to their dialogue: According to Kurtzman, Klingons have a double larynx, so in the process of post-production the team would “play with it as much as we can to give it the effect of having the double larynx.” “It’s a long, long process, but I think one we felt spoke to our desire to be as authentic as we could with the Klingon,” he said.

The end result is a far more complex depiction of Klingon language and culture than we’ve seen in past “Star Trek” series. “If you listen to ‘Broken Bow,’ the first episode of [‘Star Trek: Enterprise’], there’s occasionally an intelligible Klingon word, but it rarely has anything to do with the subtitles,” Stewart said. “Because this is a lot of work.”

Before Stewart initially took the “Discovery” job, she did check in with Okrand himself to make sure he approved. “He said, ‘You know what? I’m really glad you’re doing this for two reasons: One is so I don’t have to do it.’ Because just for a movie, it’s a lot of work, and the series goes on,” Stewart said.

But Okrand then added that he knew “the language is in good hands.” Said Stewart, “It was a huge ego boost for me — his confidence that I’ll do it correctly.”

Of course, everyone’s capable of making mistakes, and Stewart is prepared for Klingon speakers to find errors in her work. However, she’s preparing for it in a very Klingon way. “Klingons aren’t supposed to make excuses, so I will just have to own it and do what Klingons do and say a replacement proverb,” she said.

What’s a “replacement proverb,” you ask? “When you have made an error, everybody kind of looks at you, or points out the error, and they wait. And then you have to forcefully say one of these things, such as–” Stewart spat out some more Klingon “–which means, ‘Set fire on the side when there is danger.’ It doesn’t directly pertain to the error or anything, it’s like a diversion. Really, the meaning of the words isn’t as important as the fact that you said them boldly. That means ‘I acknowledged that I made an error, but I’m not going to grovel about it, I’m not going to make excuses.’ When everybody else sort of just ignores it, and they go on, then you know your apology or your replacement proverb has been accepted.”

Whether we’ll see any replacement proverbs uttered in future episodes of “Discovery” is a question for later on. Meanwhile, how the Klingons are depicted in these early episodes — as essentially nationalists hoping to preserve their own culture and avoid the integration of outside forces — may not sit easy given the current state of American politics. But Stewart, being Canadian, has a very different frame of reference.

“To me, it spoke of Aboriginal people in Canada saying, ‘We want to hold onto what’s left, we want to hold onto our language, and not be assimilated, and forced into residential schools, and had our culture torn away from us.’ That was the feeling I got, because of course I came into it already sympathetic with the Klingons,” she said. “At what point is someone’s culture being taken away, and what point are they just being jerks?”

In that light, the question isn’t necessarily easy to answer. And from Stewart’s point of view, “That is ‘Star Trek’s’ job. To ask not-easy questions to answer, and not necessarily to answer them. That’s probably the most important thing for ‘Star Trek’ to do, for me. Even more important than having Klingons that speak well.”

New episodes of “Star Trek: Discovery” are available Sundays at 8:30 p.m. EST on CBS All Access.