IndieWire TV critics discuss the most pivotal events in the first two episodes of CBS All Access’ new series. 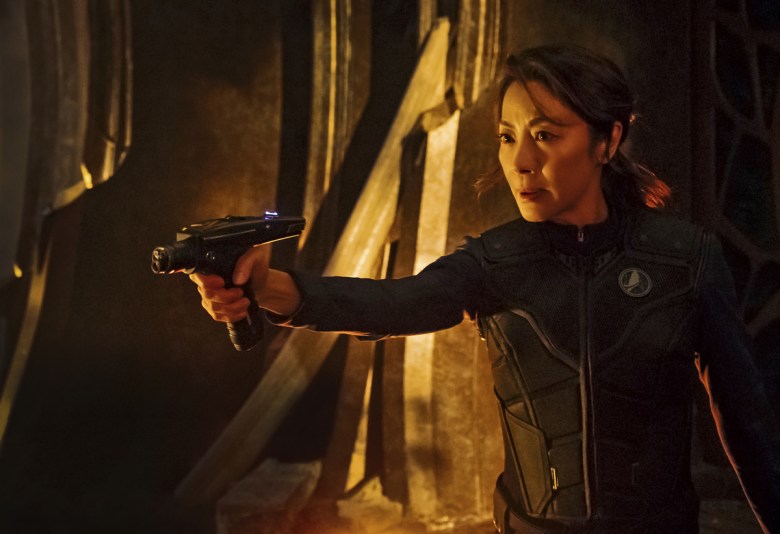 [Editor’s Note: The following contains spoilers from “Star Trek: Discovery” Episode 1 and 2, “The Vulcan Hello” and “Battle at the Binary Stars.”]

Liz Shannon Miller, TV Editor: While anyone who knows a little bit about “Star Trek” comes to a new iteration of the franchise with certain expectations, there is the basic fact that the pilot of any TV show is, to borrow a term, undiscovered country. And the launch of “Star Trek: Discovery” has been accompanied by plenty of early press suggesting that we were in for a whole new take on boldly going where no one has gone before — a take that might prove darker than previous installments.

And, no lie, introducing a major character like Captain Philippa Georgiou (Michelle Yeoh) and then seeing her brutally murdered by a Klingon is a strong indication of that. How much did that shock you, Hanh?

Hanh Nguyen, Senior Editor: Honestly, it didn’t, which in itself surprised me since I haven’t been following the development of the show that closely. While I am a fan, I wanted to avoid any preconceived notions about what was to come. Nevertheless, I think I knew Captain Georgiou was not long for this brave new world. That said, it was a daring and likely divisive move for many reasons, and the reaction to her being killed off will be intriguing, so let’s discuss that. What was your first reaction, Liz?

Liz Shannon Miller: Initially sadness, though storytelling expectations, as you mentioned, had me pretty prepared for her passing — especially when you consider that at the end of Episode 2, we haven’t even seen the starship Discovery yet. These two episodes of course serve more as a prologue than a full introduction to the series, and if you’re not aware of that in advance than I could see it being rough to invest so much in Georgiou as a character and Yeoh as a performer… and then lose her.

It was both tough and not tough to predict this happening, because on the one hand Yeoh is an amazing international star, but on the other hand, in the current TV landscape it’s not impossible to imagine her as a series regular on a show like this. You said her getting killed will be divisive — any particular reason? Hanh Nguyen: Well, backtracking first to something you’ve said about Yeoh. Absolutely, yes, she should be a series regular on a drama. She is just that damn good. I had always been a fan from her action and movie roles, mainly because she’s an Asian actress who is great at martial arts and acting, and people are really starting to see that on TV. She had a great run on Cinemax’s “Strike Back” and on Netflix’s “Marco Polo,” elevating both of those series. I would love to see her on a regular basis on my TV.

As for why some fans would be upset, well, it’s the case when anyone is built up and then killed off in service to another person’s story, right? Although it could be argued that she didn’t really give Burnham a reason to be on her path to redemption or be a hero or whatever is in store for her. She already had that with her parents being killed by Klingons. So in that case, I’m sort of fine with the sacrifice of Georgiou.

But I am bummed about losing some great Asian representation on TV. Yeoh really defied the usual typecasting here and blew me away. Can we have a prequel about Georgiou as a web series, please?

Liz Shannon Miller: YES to the Georgiou prequel series. Would 100 percent watch. And I think that’s a good point, regarding the fact that Georgiou was largely killed in service to another character’s story — a fate met by all too many people of color on television. On the plus side, at least she wasn’t sacrificed for a white man.

Interestingly enough, I don’t think Georgiou’s death was the most shocking moment, or the darkest, of the episode. Instead, what had my jaw dropping was Burnham’s (Sonequa Martin-Green) decision to mutiny. I literally wrote “oh dear” in my notes. Did that scene also top your list?

Hanh Nguyen: Ha, if I could read any of my illegible scrawl in a darkened movie theater maybe that’s what I wrote. I was shocked though. Disobeying a superior officer is one thing, but attacking them? That is so anti-Starfleet! This is a serious offense, and it’s no wonder her name is mud (not Mudd, that’s gonna be Rainn Wilson) now.

But I have to say I loved it. Maybe this is something to discuss with the departed producer Bryan Fuller — departed for “American Gods,” not to be with the gods — but I feel I’ve seen so many of the usual Starfleet heroes before: the hot-headed rebel, the one who can think outside the box, etc. To have someone working from a huge deficit, to go against everything that Starfleet has taught her (and yet, have her own moral and ethical integrity), is super intriguing to me. She’s more interesting to me wearing a prison jumpsuit bound for who knows where than just a shiny First Officer.

Liz Shannon Miller: I definitely agree with you when it comes to enjoying this different approach towards finding a whole new way into Starfleet — it’s totally different from Gene Roddenberry’s “these characters are better than regular people” stance, yet these first two episodes do a solid job of revealing Burnham to be a person with her own moral code, one that’s incorruptible. The fact that she can still make bad decisions is a sign that this show is determined to engage with the sorts of complications that create great storytelling, which is really exciting.

What remains to be seen, though, is how audiences will react to the unexpected elements that drive these episodes, and if they will in fact bring in both new and old fans. Do you think people will be sold on what’s here?

Hanh Nguyen: I do, or at least I really do hope so. I watched this with a friend who had never seen any Star Trek series, and she really enjoyed it. It’s a new beast altogether though, and maybe that’s exactly what we’re all reacting to. It feels fresh and very “of the moment” to me, in a futuristic way of course. I can only hope those who watch Episode 1 on CBS got themselves to All Access immediately to watch Episode 2. Both parts, even as a prologue, I thought were incredibly well done in terms of world-building and hinting at, well, a whole universe of possibilities to come.

New episodes of “Star Trek: Discovery” are released on Sundays at 8:30 p.m. ET on CBS All Access. This Article is related to: Television and tagged CBS All Access, Michelle Yeoh, Star Trek Discovery