Plus, a glimpse of Harry Mudd and a few things you may not have noticed in the sneak peek for the rest of the season. 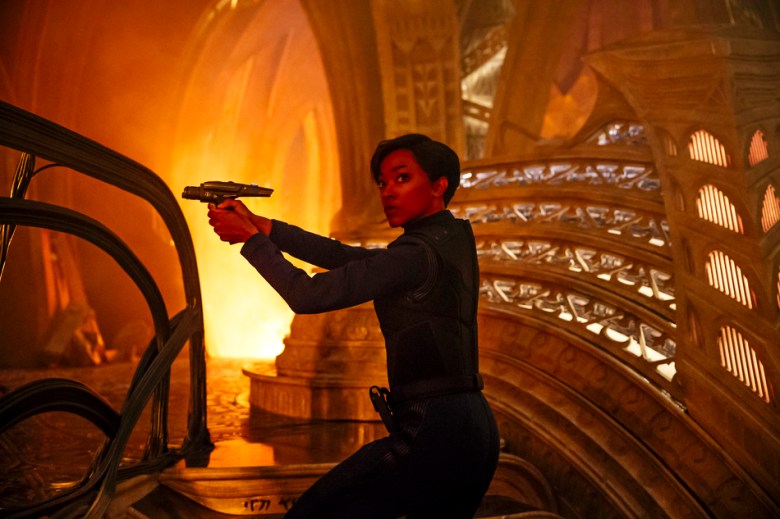 Michael Burnham (Sonequa Martin-Green) isn’t going to have an easy time of it going forward. When last we left her in the premiere two-parter, the Lt. Commander had just been found guilty of mutiny and assaulting a fellow officer, which earned her a sentence of life imprisonment. Even worse, her actions in jaunting off on her own and engaging the Klingons may have caused the deaths of an entire Federation ship’s crew. At the very least, she’ll be eaten away inside with grief for the death of her superior officer, Captain Georgiou (Michelle Yeoh), who was very much a mother figure to her.

In the full season sneak peek below, Burnham is on her way to prison, but discovers that her reputation precedes her. As the first person Starfleet has ever convicted of mutiny, she holds a special, unenviable notoriety. Take a look:

—Captain Lorca (Jason Isaacs) seems to play by his own rules also. He and Burnham should get along

—Burnham is in a chamber surrounded by sparkly particles. Could this be a special kind of pollen? Alien dander? Dust from a dead space vampire?

—The water moisture suddenly condensing into free-floating droplets on the ship is intriguing, but wouldn’t that wreak havoc with the water content in their bodies also?

—Burnham doesn’t seem to play well with others. It’s going to be fun to see a lot of fight choreography this season.

—Oh man, Saru (Doug Jones) will never let Burnham live it down. Very curious to learn more about the Kelpiens. He at least has a backhanded compliment for her.

—Burnham in hand-to-hand combat with a Klingon seems like a very bad idea.

—A frightening creature that kind of looks like a space armadillo-triceratops running through the corridors is giving off “Alien” vibes.

—The characterization of Harry Mudd (Rainn Wilson) depicts him as incredibly chatty but also hiding a hidden anger. “We’re sick and tired of getting caught up in your crossfire,” he says. He could make a formidable foe.

—Wait! Why is Burnham fighting a Vulcan? She may have learned Vulcan martial arts in her past, but this doesn’t look like a flashback sequence since she’s wearing a Starfleet uniform. And what is with all of these combative Vulcans?

New episodes of “Star Trek: Discovery” will be released at 8:30 p.m. ET on Sundays on CBS All Access.

This Article is related to: Television and tagged CBS All Access, Star Trek Discovery