A giant "cluck you" to the chicken industrial complex. 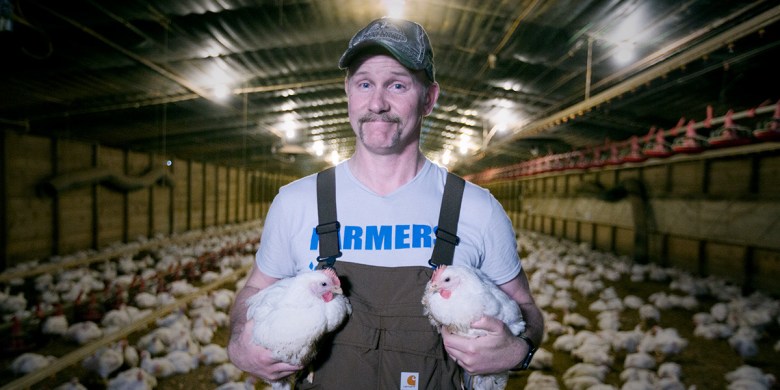 13 years after he spent a month eating nothing but McDonald’s, “Super-Size Me” director (and human guinea pig) Morgan Spurlock has opened a fast-food restaurant of his own. Of course, anyone who’s seen Spurlock’s breakthrough 2004 documentary knows that he’s not just in it for the money — you couldn’t pay that guy to eat another Big Mac, let alone produce them by the billions. Spurlock has come a long way since his $65,000 film earned $22 million at the box office and inspired a revolution in how Americans are sold their heart attacks, but his ethos hasn’t changed. Once again, he’s decided to become part of the problem in order to solve it. This time, however, the problem he’s grappling with is one for which he’s partially responsible.

If “Super-Size Me” was about the danger of calories, the hugely watchable “Super-Size Me 2: Holy Chicken!” is about the power of words. In particular, it’s about the words that fast-food chains started to use once people like Spurlock began to expose the toxicity of their products. “Free-range.” “All-natural.” “Crispy,” which is just a fancy way of saying “fried.” Marketing companies have arrived at these terms by thinking of them as the “health halo,” a nifty bit of branding unto itself. We live in a world of Orwellian doublespeak in which how things are sold to us is how we tend to think of them, and that’s as true for burgers as it is for politicians.

Read More: The 2017 IndieWire TIFF Bible: Every Review, Interview, and News Item Posted During the Festival

Determined to chart the distance between words and their meanings, Spurlock decides to open up his own fast-food restaurant. And so begins an adventure that starts with a freezer full of eggs and ends with the opening of a new chicken joint six months later, the process shining light into the darkest corners of an industry that most people can only enjoy with their eyes closed and their mouths open. It’s surprisingly grim stuff for a movie that never betrays its obvious populist streak, but its broadness only adds to its efficacy. Spurlock’s quest to put Chick-fil-A out of business is always entertaining — the filmmaker is still a charming and quick-witted man of the people, and his shtick has aged much better than Michael Moore’s — but if “Super-Size Me 2” isn’t quite as funny as the first installment, it’s considerably more horrifying.

While Spurlock devotes plenty of time to all the ancillary business of opening a fast-food restaurant (good news for anyone who’s ever wondered how they make the burgers in the commercials look so good), most of the movie is devoted to the nitty gritty of chicken farming. Teaming up with a father-son duo of dissatisfied Alabama farmers, Spurlock buys his own coop, and wow does that go from cute to catastrophic in a hurry.

One of the first things we learn about the squeaking baby birds is how easy they are to step on — several are crushed to death before they’re even a few hours old. Another fun fact: We’ve made the animals into freaks of nature, breeding them to to the point where they mature to full size in just six weeks and grow large enough to fight Godzilla; when the mutant birds start dropping dead from heart attacks, you know that you’re right on schedule. Yes, this movie includes a chicken autopsy, and yes, it will make you want to eat Soylent for the rest of your life.

Provocative but never pandering, Spurlock likes to keep himself front and center, but his style remains perfectly suited for self-absorbed times in which everyone with a cellphone signal thinks of themselves as a citizen journalist. More than anything, it’s his enthusiasm that makes this kind of edutainment so effective — it’s easier to accept the film’s arguments and internalize its morals because Spurlock takes us along for the ride. He genuinely delights in illustrating that “free-range” just means that chickens have the option of going outside, and his enthusiasm is contagious. He sincerely cares about his chickens, he cares about the business of raising chickens in general, and he cares most of all about the people who suffer under its thumb.

Neither of the “Super-Size Me” movies is fine art, but there’s a certain artfulness with which they’re assembled. Spurlock does a deft job of threading comedy together with corporate evil, poking fun at the food industry one minute and soberly confronting its consequences the next. A spoonful of sugar (or Sriracha?) helps the medicine go down, and this very necessary sequel is both more amusing and more stomach-churning because Spurlock applies the same point-of-fact approach to both parts. By the time he starts investigating the tournament system with which “big chicken” supports (and shackles) the individual farmers who sustain the industry’s five big conglomerates, you don’t know whether to laugh or cry.

But what most elevates “Super-Size Me 2” above similar message docs is that Spurlock knows that attitudes are easier to change than actions. He knows that making viewers weep for the hardworking farmer who’s $4 million in debt to a massive corporation won’t stop them from going to Subway, just like watching him raise baby chicks won’t stop us from wanting to eat them; the human capacity for empathy is an elastic band that can only stretch so far before it snaps. Spurlock refuses to ignore the gap between our principles and our actions, and his film endeavors to bridge it.

When he finally opens Holy Chicken!, refurbishing a shuttered Wendy’s into the most exciting fast-food franchise in Columbus, Ohio, it’s not the chicken that makes the restaurant so different (Spurlock paints his filets with fake charcoal lines just like everyone else). No, what separates Holy Chicken! from the competition is that it doesn’t allow its customers to ignore that some things are just too good to be true. The specifics are best saved for the movie itself, but let’s just say that Spurlock doesn’t delude himself into thinking he can get us to all go vegan. Still, the onus is clearly on us to get informed and make change, because nothing is going to happen until we put our money where our mouth is.

This Article is related to: Film and tagged Documentary, Reviews, super-size me 2, TIFF 2017