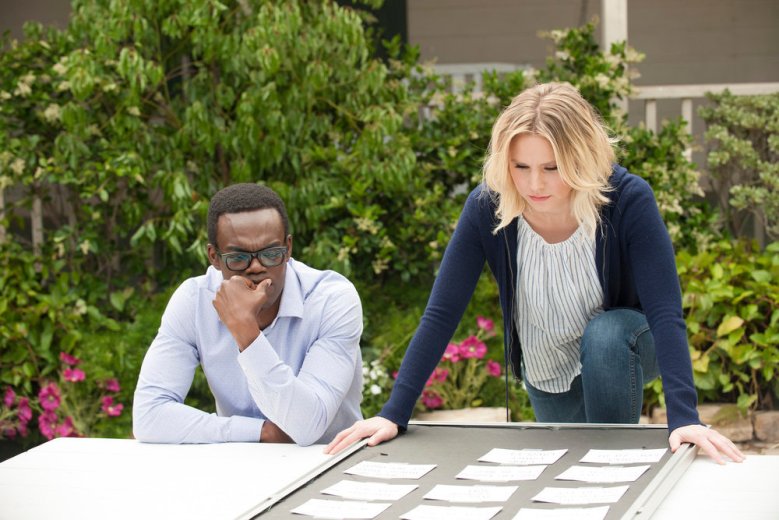 When you’re a writer on “The Good Place” like Megan Amram, sometimes you have the chance to ponder the true nature of existence and humanity’s obligation to each other. There’s careful thought about the rules of this very specific, constantly shifting form of the afterlife.

Some days, you spend your time figuring out which numbers make people laugh.

“I’m sure this is like every comedy show, but there’s this feeling that certain numbers are just funnier than other ones, and I don’t mean because they’re like 420 or 69, numbers that are inherently funny. There’s just a feeling that 802 is a really funny number,” Amram explained in a recent interview with IndieWire. “I’m always like, ‘What is my job? I’m being paid to think about which number’s the funniest.’ So thank you, NBC.”

For fans who’ve seen Season 2’s brilliant third episode, “Dance Dance Resolution” is filled with irregular numbers, clueing the viewer into just how long (and how many times) Michael (Ted Danson) has been trying to perfect his misleading version of the “Good Place.” Finally freed from having to restrict what the audience sees of Michael’s behind-the-scenes life, Amram and the rest of the writers had fun coming up with completely new ideas about his scheme, not just reusing what couldn’t make it into Season 1.

“A lot of the stuff for Episode 3 was completely from scratch. All of us in the writer’s room had so much fun just truly thinking like if we were Michael and we were trying to create a magical world to actually torture these four people, what would be literally every possible way that you could do that?” Amram said.

“Dance Dance Resolution” follows many of Michael’s 802 (see, funny, right?) attempts to perfect the mutual torture chamber that he’s created between the other four major characters. In some of these scenarios, Eleanor comes to the ultimate revelation that this is, in fact, the “Bad Place” quicker than expected. In others, the various combinations of characters and soulmates (be they man, woman, or canine) made for a much longer path to unintended enlightenment. Though the process of writing a show like “The Good Place” is a perpetual team effort, Amram took the lead on this episode, helping to ensure that each iteration made sense from a character and logistics perspective.

“As I was writing the first draft, it was sort of my job to also make sure that all of them seemed plausible,” Amram said. “No matter how long or short you end up seeing the reboot, it has a full narrative to it that we talked about at length. Something that we very actively thought about was, ‘What is the choreography of this?’ We wanted to give it a real sense that Michael has had a few that have flopped right away, or a few that have lasted months, maybe even years in the time of ‘The Good Place.’ We just wanted it to feel like it’s as frenetic as possible and to give it a real sense of variability.” “Dance Dance Resolution” sees Michael at his most human yet, disheveled and unshaven, lamenting that Eleanor has spent the better chunk of this eternity one step ahead of his plan. Amram seized the opportunity to make him as relatable as possible in that moment.

“There’s a longer part of that scene, him drinking at his desk saying that he’s fat, and then getting up and doing karaoke in the corner. Which is very personal to me as someone who’s gotten drunk, thought I was fat, and done karaoke. Just watching Ted Danson pretend to be, basically, a drunk 20-something girl was one of the highlights of my career,” Amram said. “It’s great that you write stuff and then Ted Danson has to do it.”

Mindy St. Claire (Maribeth Monroe), who featured prominently in the end of Season 1, was one of the show’s reality wild cards that “The Good Place” left ambiguous after the big twist. It’s a character that Amram explains was vital to offsetting the way the regular characters are slowly changing.

“Reading people’s responses to Season 1 of the show, a lot of people thought Mindy was made up. I think she’s such a good asset to the world of the show, because she is so grounded in a real time. She’s very 1980s America. She also can just be a real dirtbag in a lot of ways that our characters are tending to help each other now. That’s what I love about her as a character, is that she really does just like chilling with her sex tape, and her pastel art deco Yacht Rock décor. If she had a little cocaine, she would be in the Good Place,” Amram said. “It’s so fun to go into her weird home. I’m just glad that we were able to get the phrase ‘looking hole’ on network television.” Aside from the amount of time that the team spends on making numbers funny, Amram has her own all-consuming passion: puns. She has a few from this episode that she’s proud of (“I really liked Knish from a Rose. There’s not enough knish jokes.”), but whether by fate or by fiat from creator Michael Schur, this was her chance to shine.

“I have a true mental illness of only thinking in puns all the time. I feel like Mike [Schur] gave me the gift and the curse of writing an episode that had a bunch of different fake stores in it,” Amram said. “I was writing my draft of this episode, and I got to the part where I was going to write in all the different store names for different types of food. I was like, ‘Megan, don’t spend more than an hour. Don’t spend more than an hour on this. You don’t need to spend a day writing pun names.’ Then, flash forward to: I was in a coffee shop working on like truly hundreds of pun names for six hours or something. I did a ton about chicken, but there were whole categories of food that we didn’t end up doing.”

As nefarious as Michael’s plans get (Danson’s character’s, not Schur’s), Amram and the rest of the writers are constantly trying to come up with new ways to allude to the horrors lingering right off camera.

“I cannot tell you how much of our time was spent just trying to think of torture devices, which is a very fun game to play. But also, I feel like we keep coming back to penis things. It’s always like penis cores, penis peelers, penis flatteners, and they’re all funny, if I do say so myself,” Amram said. “Butthole spiders, too, is in sort of the same world. Bees with teeth is a good example of something that’s very scary and doesn’t necessarily have to do with your penis, though I imagine they will go after your penis.” It wouldn’t be an episode of “The Good Place” without leaving on a perspective-shifting note. For “Dance Dance Resolution,” it’s the revelation that Michael now wants to team up with Eleanor and the gang as a means of mutual preservation.

“One of the things about having Ted Danson as your main character is even when he plays a demon, he is just so likable and so fun that I think you’re kind of ready to be on his side anyway,” Amram said. “I think we like to keep writing in directions where you don’t know what’s going to happen next. Trying to think of what is the most obvious thing that could happen in the show, then doing the 900th obvious thing. Hopefully Michael teaming up with them this early in the season is a surprise.”

After crafting an episode on the page, built on a very frenetic and disorienting feel, it was up to director Drew Goddard to help bring it to life. Goddard, who directed the pilot in addition to the equally fleeting CGI craziness of “The Cabin in the Woods,” had already ushered one “Good Place” chaos sequence into existence. (Ah, the flying shrimp!) But that spirit needed to flow throughout this episode, nearly from start to finish.

“He’s really good at just being like, ‘OK. Then, we’re going to have like a half a second scene of the pig that Chidi is wrestling with, or Chidi running away from the bees,’” Amram said. “I feel like he has a natural sensibility that aligns very well with jokes that happen so quickly that you almost can’t figure out what you just saw. Having seen the final cut of this, I feel like this episode is the closest I’ve even come to getting what my brain feels like into the world. Watching it, I was like, ‘This is very exhausting, and people must be very exhausted by talking to me.’ But that was a very exciting aspect of seeing it.”

Speaking of Chidi’s pig, for an episode built in part on not being able to process everything that’s happening at once, there’s one on-screen performer from the episode that stands out above all others for Amram.

“That pig’s my favorite actor in all of Season 2. She’s a beautiful woman with curves,” Amram said.

This Article is related to: Television and tagged Megan Amram, NBC, The Good Place