Despite distributing through Netflix, Baumbach is still in love with the big screen — and film. 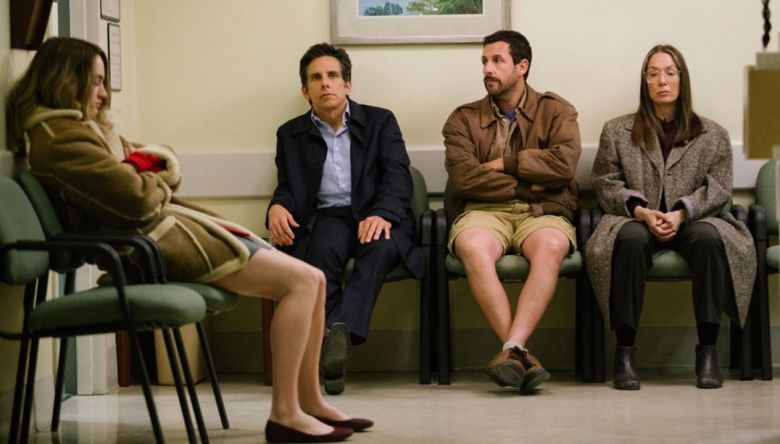 “The Meyerowitz Stories (New and Selected)”

With his “The Meyerowitz Stories (New and Selected),” filmmaker Noah Baumbach is returning to familiar — and fertile — territory, thanks to the eponymous family at the heart of the feature. Kitted out with a cast that include Adam Sandler in the somehow-still-rare dramatic role, Dustin Hoffman, Elizabeth Marvel, Emma Thompson, and Ben Stiller, familial dysfunction, a Baumbach mainstay, drives the film’s plot, but Baumbach’s ear for dialogue and hard-won emotion keep it chugging right along. The film also heralds Baumbach’s return to shooting on film — in this case, Super 16 mm — after going digital for his last trio of features. And, to hear him tell it, he’s not going back.

At a New York Film Festival press conference this afternoon, Baumbach got honest about his flirtation with digital, and why he’s all about film…again.

“I shot ‘The Squid and the Whale’ on Super 16, and in a kind of different way, though, we hand-held the movie,” he explained. “It was a more, for lack of a better way to define it, more documentary-like, less structured in terms of the blocking.” Baumbach’s initial turn to digital came care of 2012’s “Frances Ha,” a free-wheeling, location-hopping feature that benefitted from the ease of use that can make digital cameras so appealing, followed by further digital forays with “Mistress America” and “While We’re Young.”

“It started with ‘Frances Ha,’ I shot on digital, but I shot it on the Canon 5D, we shot it black and white, and we really did a whole thing with that. I was very happy with how that came out,” he said. “And then I tried the Alexa on a couple of movies. I realized, and I felt it as soon as I went back into film, so much of my making movies is connected to my childhood. Not just the subject matter of the movies, it’s also the going to movies, the seeing movies, and going back through that, all the time. It’s both conscious and unconscious.”

For the filmmaker, much of that emotion is steeped in the stock those films are actually shot on, and digital doesn’t cut it.

“Watching something on film has a totally different emotional effect to me, and seeing it projected on film,” Baumbach said. “I kind of realized, having shot digitally, that I need to do these things on film. I had sort of tried to make an argument for digital, just to try it out, and it’s fine, but it doesn’t have the same meaning for me.”

That may sound strange coming from a filmmaker like Baumbach, who is now trying his hand at releasing his films in the streaming space: while he made the film independently, it was purchased by Netflix and they will be the ones to release it — with a limited theatrical window — next month. “They’ve been great,” Baumbach said of his new distributors, before gesturing to the screen behind him, “But I think, like many filmmakers, this is the way you’re supposed to see it.”

He added, “I designed it to be put into theaters, as I make all my movies and expect all my movies to play that way. It’s an unbeatable, and I believe, an undying experience.”

“The Meyerowitz Stories (New and Selected)” debuts on Netflix October 13. Watch the trailer below.

This Article is related to: Film and tagged New York Film Festival, Noah Baumbach, The Meyerowitz Stories (New and Selected)