Doesn't matter how much MacFarlane steals or spends — this show still feels cheap. 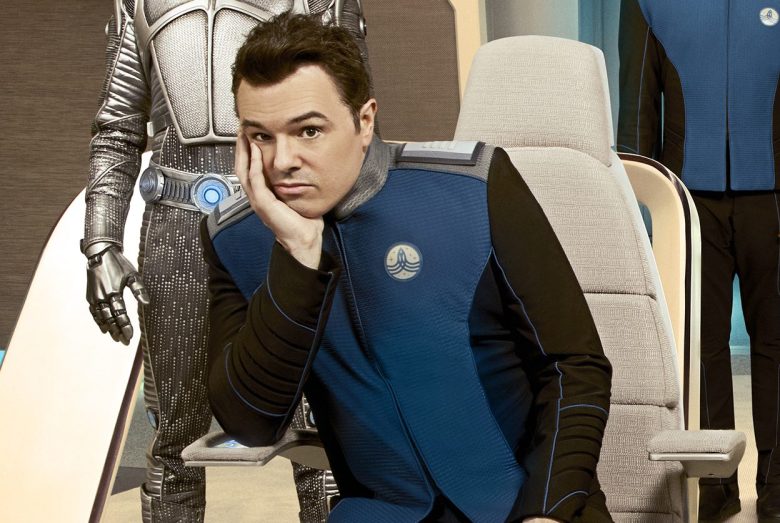 The best way to describe “The Orville” is “What would happen if a guy who spent years writing animated dick jokes for television got the opportunity to make his own ‘Star Trek’? Oh, and what if his parent network gave him millions to make that happen?” It is a show that will be baffling for people who have never seen an episode of “Star Trek.” And for fans of the franchise, who know intimately how a “Trek” series feels, it will be downright disturbing.

“The Orville” chronicles the adventures of Captain Ed Mercer (Seth MacFarlane) and the loyal crew of the U.S.S. Orville (seriously, it uses the prefix U.S.S.) as they soar through space on some unexplained exploratory mission in the far distant future. There are humans, and there are good aliens, some of whom are crew members, and there are bad aliens, who get fought in space battles. There’s also Ed feuding with his ex-wife Kelly (Adrianne Palicki), who now serves as his commanding officer despite the fact that that’s probably a terrible idea. But otherwise, it’s a simple show about decent people traveling through space and occasionally saying funny things.

It’s the sort of show that might sound sustainable as a half-hour comedy. In fact, when first revealed last May, nothing about “The Orville” seemed all that offensive. Based on the trailer, the assumption was that Seth MacFarlane was doing a “Star Trek” parody, a la “Galaxy Quest” — theoretically not an annoying notion, especially since “Galaxy Quest” was a great movie.

But the most shocking fact about “The Orville for most people is that it’s an hour long, and fundamentally uninterested in being a comedy. So many “Orville” scenes just die in the moment, because MacFarlane’s comedy instincts as a writer (he wrote the pilot, at the least) means that he can’t avoid writing in jokes. But this show does genuinely want to be a sci-fi adventure, so the comedy is either played completely deadpan, or not played at all. After watching the actual show, its intentions became clear: Seth wanted to cosplay being captain of the U.S.S. Enterprise. And Fox let him do it. The 1990s “Star Trek” era, from “The Next Generation” to “Deep Space Nine” to “Voyager,” isn’t necessarily television that should be held up in comparison to the quote-unquote “Golden Age.” But it was well-produced for its time, and more importantly, nurtured some great storytelling and characters even while working within a largely standalone format. “DS9” was even an early and impactful example of how well serialized storytelling might work in genre programming, which led to “Battlestar Galactica,” “Lost,” and many other great shows.

Many talented people, above and below the line, rose up from the “Trek” ranks. Funnily enough, some of them work on “The Orville.” This is a list of people involved with “The Orville” who also worked on at least one iteration of “Star Trek”:

“Trek” creator Gene Roddenberry’s original pitch for the 1966 “Star Trek” was infamously “‘Wagon Train’ to the stars” (if you don’t know what “Wagon Train” is, don’t worry, just know it was a popular Western in the ’60s). He at least went to the trouble of tacking on the “to the stars” bit of that concept — creating a new world for his characters to inhabit. Meanwhile, MacFarlane has created “‘Star Trek,’ except with ‘an Average Joe’ at the helm and all the technical names changed.”

For as good as “The Orville” looks, so many creative decisions made in building this world are flat-out cheap and lazy. The crew of the Enterprise Orville, who work for the Federation Union, use replicators synthesizers and transporters (they actually use the word “transporting”) in their daily lives. Oh, but watch out for those pesky Klingons Krill! They’re always causing trouble. The headline above invokes three different ways the show is bankrupt: creatively, morally, and ethically. The lack of creativity is clear, given how it takes the basic framework of a “Trek” series and files off the serial numbers. But morally, it’s hard to imagine how anyone involved with this project could be comfortable with walking onto that set, watching those episodes, and seeing how blatant the imitation is. And ethically, it’s frustrating to see that the systems put into place to keep creators from ripping others off in such a blatant manner failed here.

The lack of creativity does not extend to the characters of the show, for the record. Certainly MacFarlane, as Ed, never gets much of a personality beyond his love of pop culture, while many members of the supporting cast represent paradigms established by the previously airing “Trek” series, some of them might represent the most creativity involved in “The Orville,” period. A few unique alien races are introduced, and Alara, a young inexperienced security officer of the Xelayan race (Halston Sage) especially makes an impression for being both super-tiny and super-strong, bringing a new dynamic to many of the show’s action scenes.

Here is another nice thing to say about “The Orville”: While the writing around MacFarlane’s and Palicki’s characters more often than not plays into some of the “dumbo man”/”nagging women” tropes that form the foundation of most “Family Guy” narratives, there is something of an effort made to not be super-misogynist. And there is a same-sex relationship that is never played for laughs. But then there’s Episode 3, which, without spoilers, may be one of the most tone-deaf and offensive discussions of gender ever seen on screen, especially in an era when many people have come to embrace the idea that gender is a concept that goes beyond biology to personal identity. The episode is an allegory meant to invoke memories of “Star Trek” tackling social issues in the 1960s and beyond, but it’s so clueless in its approach that it probably sets back real understanding of the issue to, well, the 1960s.

If MacFarlane truly wanted to create an homage to all of the qualities that have made “Trek” a beloved property for years, he would have done so by actually creating his own sci-fi universe — his own aesthetic, his own episode structure. He would have striven for actual originality, which is not an impossible feat within this genre.

Actual science fiction fans know that while there are some major archetypes which franchises often borrow from each other, it is possible to create distinct universes. It is possible to have your own voice heard, even in the silence of space. But the only unique sounds made by “The Orville” are things we wish we’d never heard.

This Article is related to: Television and tagged Seth MacFarlane, The Orville, TV Reviews