As the 18-hour PBS series ends, here’s a list of books by the documentary’s interviewees to continue learning about their experiences from the war. 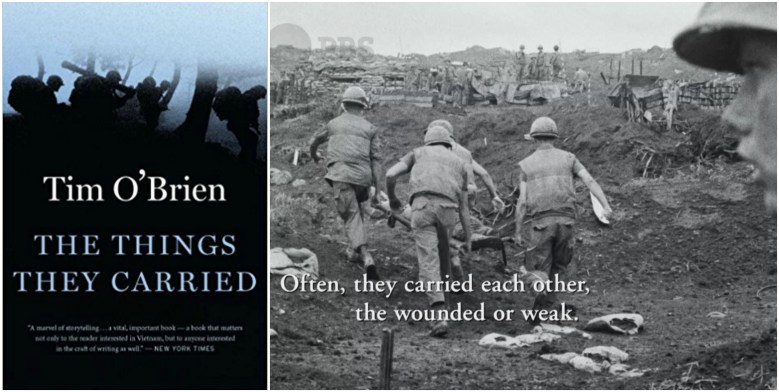 “The Things They Carried,” a book by Tim O’Brien, who was featured in “The Vietnam War”

Ken Burns and Lynn Novick’s “The Vietnam War” has been an 18-hour journey into understanding decades of trauma and loss that still affect Americans today. Even though more then 40 years have passed, emotions still run deep about that conflict.

During a Television Critics Association press tour panel for “The Vietnam War” in July, retired General Merrill McPeak spoke passionately about his view on the war.

“I’ve heard it argued that we never lost a military engagement in Vietnam. We just lost the war,” he said. “I’ve not been back to Vietnam. I’m a poor loser… I’m not sure I’ll ever go to Vietnam. Many, many veterans do, and they’re warmly received. It’s a wonderful relationship we have with the Vietnamese now. It’s great. I celebrate it. I won’t be a personal part of it, I think, because I care deeply about having lost.” All sides suffered from the sacrifices, destruction, and pain from the war, and that includes the so-called winners as well. Novick told IndieWire how Nguyen Ngoc, an 85-year-old scholar and veteran of the North Vietnamese army, watched the documentary in its entirety and then gave a very moving speech about what it could mean to the Vietnamese.

“I used to ask myself: ‘How come the United States after 40 years still can’t get over the Vietnam War?’ I considered it a weakness of the United States,” he said. “Actually now, having seen this film, I believe that the way in which the United States hasn’t ever really been able to leave the Vietnam War behind is actually a great strength. It’s is a nation that’s always asking itself about its own history, questioning its past and asking questions about what it’s done and why it did it. I really hope that we Vietnamese can make a film like this and that we can starting asking ourselves those same kinds of very difficult questions.”

PBS’ documentary has been the start of a conversation for many, and the learning and discussion can continue through additional materials. Many of the people interviewed throughout the series turned out to be authors, which was only revealed in the final episode.

“During the war, these were just ordinary people, who they were then,” said Novick. “Because they were telling you about their experiences of what it was like to be there, we thought [revealing that they became authors] would distract from seeing them as the ordinary people that they were when the war was happening. We consciously chose to withhold that information until the end, for everybody. And then it’s an interesting surprise to find out who some of these people are.”

Episode 10, “The Weight of Memory,” takes its title from one a phrase that Tim O’Brien wrote in his book, “The Things They Carried.” He reads a few lines from the book at beginning of the episode:

“They shared the weight of memory. They took up what others could no longer bear. Often, they carried each other, the wounded or weak. They carried infections, they carried chess sets, basketballs, Vietnamese-English dictionaries…”

Here’s a list of books written by the interview subjects seen in “The Vietnam War”:

In the documentary, O’Brien revealed how he had wanted to be a draft dodger and escape to Canada, but that he couldn’t refuse the United States. He had to “live with a failure of conscience and nerve.” Later, when he was in Vietnam, he also related how he had come upon My Lai long after the villagers had been massacred.

“The Sacred Willow” by Mai Elliott In the documentary, Elliott gave an insider’s view of what it was like to be a South Vietnamese civilian during the war, one whose family was divided when her sister left to join the Northern fight for independence.

Marlantes was a Rhodes scholar who had abandoned his scholarship to re-enlist because his conscience told him that if he didn’t help soldiers get out of Vietnam alive, “I will be taking part of one of the greatest crimes of our century.” He later suffered from PTSD.

“Notes to the Man Who Shot Me: Vietnam War Poems” by John Musgrave Musgrave was one of the most emotional veterans in the film. He had spoken eloquently about the intense terror and hatred he had for the enemy, how he got wounded in Vietnam, his thrill from hearing John Kerry speak for all soldiers, his anger with Jane Fonda, and how he felt that the Vietnam War Memorial would “save lives.”

“The Sorrow of War” by Bao Ninh

Bao Ninh was drafted into the North Vietnamese Army when he was 17. In the documentary he discussed how no one could be a “deserter.” They’d just walk home to meet their families and then go back to rejoin their fellow soldiers.

“A Rumor of War” by Philip Caputo

“The Stars, The Earth, The River” by Le Minh Khue

Le Minh Khue was with the North Vietnamese and had been assigned to a home in Hue when everyone was fleeing the country. Her short stories give a fictionalized yet eye-opening account of what a young Vietnamese woman endured during wartime.

“Chained Eagle: The Heroic Story of the First American Shot Down over North Vietnam” by Everett Alvarez Jr. and Anthony S. Pitch Alvarez was one of the very first American POWs in the war and had endured beatings and torture. At one point, he was marched past a group of angry Vietnamese people, and that footage was included in the documentary as well. He was released more than eight years later.

“A Patriot After All: The Story of a Chicano Vet” by Juan Ramirez

“Life and Death in the Central Highlands” by James T. Gillam

Check out the full reading list of other books recommended to accompany “The Vietnam War.”

This Article is related to: Television and tagged Books, Ken Burns, PBS, The Vietnam War