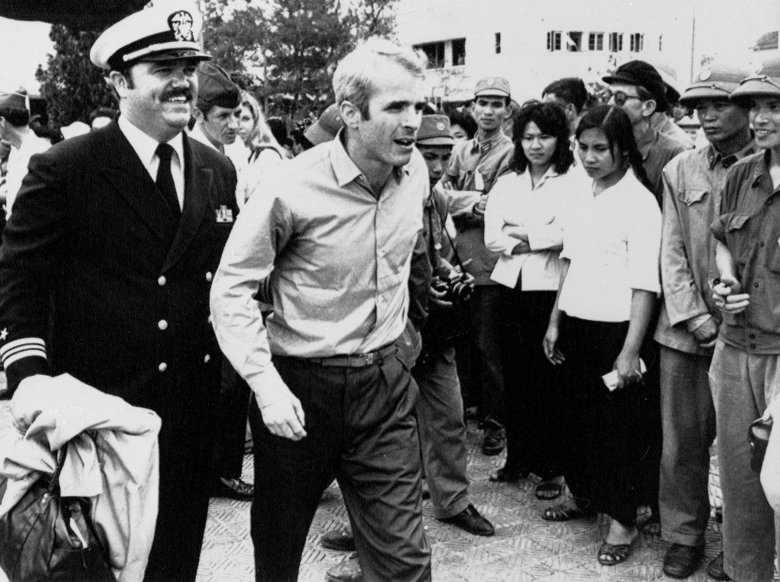 As “The Vietnam War” reaches its halfway point Thursday night with Episode 5, “This Is What We Do,” viewers will recognize a familiar face: John McCain. The Arizona senator is one of the most high-profile POWs during the Vietnam War, and his ordeal was brought back into the spotlight during the 2016 presidential campaign when Donald Trump said, “He is a war hero because he was captured. I like people who weren’t captured.”

The PBS documentary will reveal just a fraction of the ordeal that McCain went through after he was shot down during a bombing mission over Hanoi in October 1967. As the son of Admiral McCain, John McCain was an important prisoner and therefore was also interviewed for television at that time. He underwent various beatings and tortures that have left him with lifelong health issues and disabilities.

Although Ken Burns knows McCain, the filmmaker used that connection as a resource but specifically avoided interviewing him and other famous people for the documentary.

During the Television Critics Association press tour panel for the series, Burns said, “One of the first things we did is we went to John McCain] and John Kerry and said, ‘We need your help. We’re going to do this, but we’re not going to interview you. You will be in it in your archival selves, but you’re alive today, and we don’t want you in any way sort of spinning or anything like that.’ We didn’t quite put it that way. We weren’t going to talk to Dr. Kissinger or Jane Fonda or a number of other people.” Instead, since the war affected so many people from both Vietnam and America, the documentary featured other people’s stories, including Everett Alvarez, the first American POW in the Vietnam War, who was imprisoned for over eight years.

“You’ll meet some people that you’ve heard of, Neil Sheehan, who was a cub reporter anxious to go and watch the victory over communism,” Burns said. “You will see Max Cleland, the former Georgia senator who is a triple amputee, two legs and one arm. The Gold Star mother … didn’t have to retell her story. She didn’t have to share the worst thing that ever happened to her.

Read More:  ‘The Vietnam War’ Is the Documentary I’ve Been Waiting for as a Vietnamese Refugee and an American Citizen

“We had interviews in person with several hundred,” he continued. “We filmed 100. There’s 79 in the final film, and all of those people represent a very precious sort of gift to us of memory.”

Each of the episodes of “The Vietnam War” covers a different period of time, yet still work as standalone films that don’t require context from previous episodes. Episode 5 also covers:

The Language of Hate: The etymology of the racial slurs used during the war that were a coping mechanism for soldiers to kill the Vietnamese by denying their basic humanity.

War Atrocities: Army reporter Dennis Stout was one of the many witnesses to the atrocities perpetrated on the Vietnamese people by the small force known as Tiger Force. Some the actions included murdering juvenile and elderly civilians and raping women.

The Rise of Protests: College students and other ordinary citizens were really starting to show their disapproval for the ongoing war, and one march included 50,000 people.

The Beginnings of the Tet Offensive: Almost the entirety of Episode 6, which airs Sunday, Sept. 24, will cover the military offensive that took place during Tet, aka the Vietnamese New Year holidays. The series of surprise attacks had a negative impact on how America viewed the war.

This Article is related to: Television and tagged John McCain, Ken Burns, PBS, The Vietnam War