The HBO comedy's second season isn't as mean as before, but it's dark humor plays best when you accept the inherent evil of Lee Russell. 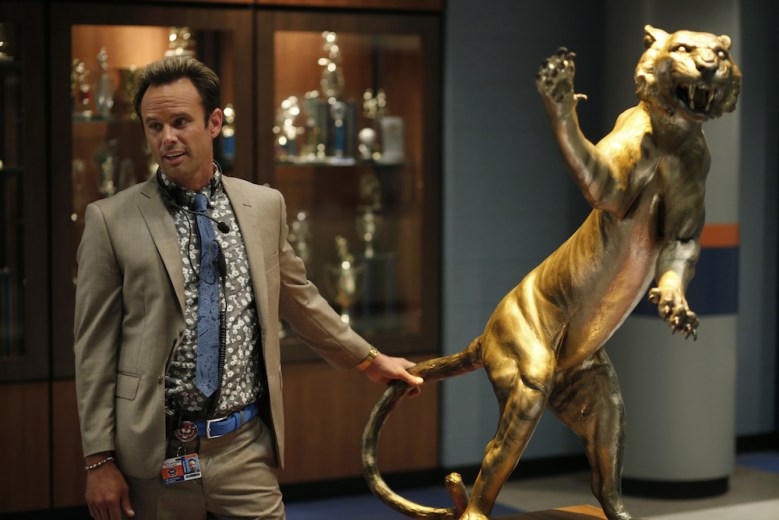 Season 1 of “Vice Principals” ended with a shocking twist. After successfully blackmailing their way into co-principal chairs, former VPs and power-hungry madmen Neil Gamby (Danny McBride) and Lee Russell (Walton Goggins) were riding high — until their rides were sent sky high. Smoke furled from their flaming engines, and when Gamby went to investigate what happened in the school parking lot, a masked shooter put two bullets in his chest. Such an unexpected event makes for an easily identifiable trajectory in Season 2: Who shot Neil Gamby?

Read More: Tig Notaro Says Everything She Needs to Say About Louis C.K. in One Episode of ‘One Mississippi’

Season 2 does attempt to answer this question. That it gets a bit lost after the first few episodes is forgivable, in part because “Vice Principals” is a fine comedy for anyone who loves its two stars. But rather than accept the status quo, there is a solution to overlooking the new season’s B-grade mundanity — sporadic laughs, forced character development, and an occasional stunted story arc — that makes it feel like a far more intriguing and original comedy:

Imagine Lee Russell is the devil.

Now, this viewing trick won’t work if you imagine he’s like the devil. He is like the devil, but that’s obvious; he’s a bad dude. You need to see the devil himself inhabiting Lee Russell’s body for a giddy smile to creep across your face whenever Lee pushes people’s big evil buttons. If that means picturing little horns sprouting on his forehead or a red tail poking out his backside, so be it. Also of note: You can’t pretend he’s just Gamby’s imaginary friend. The character is too fleshed out to be a nonexistent entity whispering bad advice into Gamby’s ear. But that’s exactly what the very real, very demonic Lee Russell is doing. When Gamby flies into a jealous rage over his new girlfriend having sex with other people before they were together, Russell gives him a confused look before verbally backing him up. When Gamby feels guilty about framing a drug dealer to get him kicked out of school, Russell is there to smile, laugh, and tell him that’s just fine. When kids get arrested for stealing, Russell gives them a stern warning before cracking up at the very idea that he, of all people, would ever question moral repugnancy.

Now, before you start tracing this theory back to the series’ origins, know that that doesn’t work. The early episodes of “Vice Principals” were rough. So much hatred was spewed between the combating high school vice principals that it was difficult to invest in either of them. Both wanted the principal’s chair (left vacant by Bill Murray’s Principal Welles). Both were willing do anything to get it. And when they were passed over, their alliance to destroy Dr. Brown (Kimberly Hebert Gregory, giving a great performance) felt like it created a lose-lose scenario: Either they win and evil triumphs, or they lose and nothing changes. Plus, there can’t be two devils; only one of these men can be the biggest bad.

But a funny thing happened near the end of Season 1 (a good thing, considering “Vice Principals” is a comedy): It became clear that these two men weren’t created equal — not equally evil, anyway. Russell was far more cutthroat, conniving, and gleeful in executing the duo’s vengeful plan. Whenever Gamby worried he had gone too far, Russell encouraged him. Russell delighted in Gamby’s nastiest tendencies because they validated his own. By the end, Gamby didn’t want to go through with their scheme, and only Russell’s sadistic insistence pushed them into being co-principals.

This Article is related to: Television and tagged HBO, TV Reviews, Vice Principals