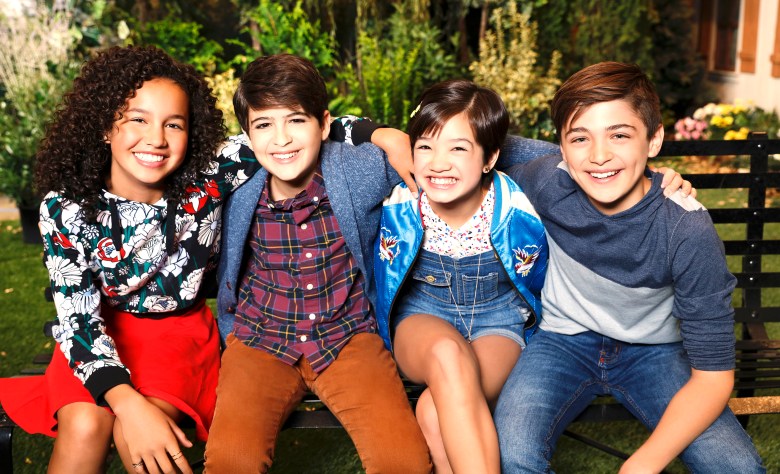 In a groundbreaking move by the Disney Channel, a young character on the network’s breakout comedy “Andi Mack” will explore his sexual orientation.

As the show returns for a sophomore season, it’s revealed that Andi (Peyton Elizabeth Lee) isn’t the only character with a crush on one of the boys at school, Jonah Beck (Asher Angel). Her pal Cyrus (Joshua Rush) suddenly realizes that he also might be interested in boys. This leads to Cyrus going on a journey to define himself as a gay individual this season, despite the fact he has a girlfriend Iris (Molly Jackson).

This is a first for Disney Channel to depict character’s journey to self-discovery as a gay individual. Series creator Terri Minsky, who had previously created “Lizzie McGuire,” consulted child development experts to make sure that she told Cyrus’ story in an age-appropriate and respectful manner. The episode was also screened in advance for several organizations including Common Sense Media, GLAAD, and PFLAG.

“Andi Mack” hasn’t shied away from exploring dramatic story lines. The hit Disney Channel series centers on the life of its title character Andi, who only recently discovered that her older sister Bex (Lilan Bowden) is in fact her mother. Her friends Buffy (Sofia Wylie) and Cyrus have been supporting Andi as she’s been navigating her family life and her longtime crush on Jonah. “Andi Mack” now joins a handful of other family-friendly programming that have tackled queer youth stories, including Netflix’s “One Day at a Time” and Amazon’s “Danger and Eggs.” Disney Channel had previously tested the waters for LGBTQ-adjacent storytelling by including gay parents on both the live-action comedy “Good Luck Charlie” and animated series “Doc McStuffins.”

Read More‘Will & Grace’: Beyond Its Gay Characters, Revival Will Tackle Transgender And Other LGBTQ Issues

“Andi Mack” had dropped hints about Cyrus’ slow realization of his identity in the first season. Although he had a girlfriend, he was always far more interested in Andi’s relationship with Jonah. Cyrus also once freaked out when he thought Jonah texted him, “You’re girly,” and subsequently attempted to act in a more stereotypically masculine fashion, getting tips from Buffy. (The text was supposed to read, “You’re gnarly.”) He even went out with Jonah for what was supposed to be a double date, but somehow ended up becoming a one-on-one outing and bonding experience.

“‘Andi Mack’ is a story about ‘tweens’ figuring out who they are; Terri Minsky, the cast and everyone involved in the show takes great care in ensuring that it’s appropriate for all audiences and sends a powerful message about inclusion and respect for humanity,” said a Disney Channel spokesperson. Meanwhile, perhaps bracing for a negative response from some political camps, The Walt Disney Co. also included a statement: “For more than 90 years, The Walt Disney Company has been home to some of the world’s most beloved characters and cherished stories. Disney holds a special place in the hearts of millions of people because our themes and characters are universal, relatable and relevant to everyone. The Disney brand has always been inclusive, with stories that reflect acceptance and tolerance and celebrate the differences that make our characters uniquely wonderful in their own way. We constantly strive to live up to that legacy by continuing to create and share compelling storylines from our studios and media networks that entertain with inspirational and aspirational themes and reflect the incredibly rich diversity of the human experience. Our stories are timeless because they speak to the heart; our characters appeal to children across gender, ability, and experience because they’re defined by kindness, loyalty, humor, courage, wit and other traits that make a good friend. Disney remains committed to continuing to create characters that are accessible and relatable to all children.”

“Andi Mack” kicks off its second season with a one-hour premiere on Friday, Oct. 27 at 8 p.m. ET on Disney Channel.

This Article is related to: Television and tagged Andi Mack, Disney Channel, LGBTQ