Vack made his SXSW-winning debut behind his agent's back, using money from his role on "Mozart in the Jungle." It's easy to see why. 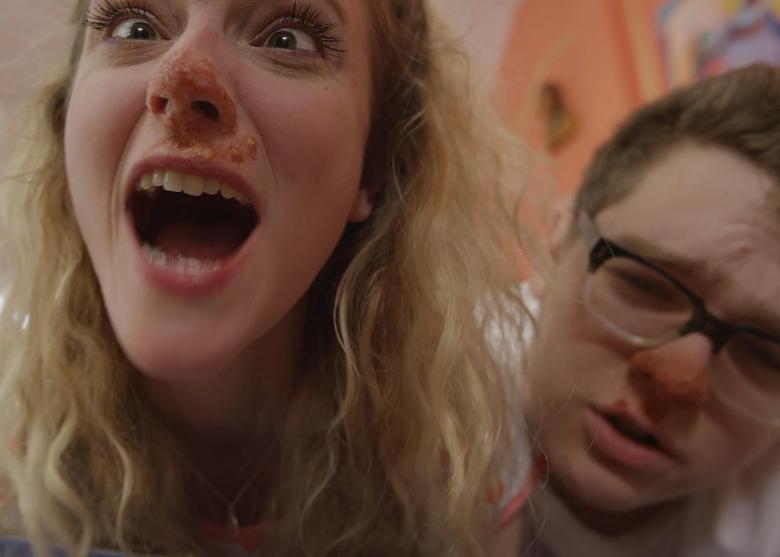 When Peter Vack scored a role over the summer playing Lola Kirke’s boyfriend on the Amazon series “Mozart in the Jungle,” he used the money to direct his first feature. The actor had scored in dozens of low-budget projects and directed a short film a few years earlier, but he had reason to believe nobody else was going to back his feature-length debut.

The movie, by the way, was called “Assholes.” It premiered at the SXSW Film Festival, where it won the inaugural Adam Yauch Hornblower Award (a prize reserved for unique filmmaking visions); it also jolted audiences and critics alike, including IndieWire’s David Ehrlich, who called it the most disguising movie ever made. If you can muster the courage to make it through “Assholes,” it’s hard to disagree with that assessment.

Vack co-stars as a demented addict opposite his sister Betsey Brown as Adah, who falls for junkie Aaron (Jack Dunphy), and the pair engage in a grotesque, drug-fueled romance replete with STDs in extreme close-up. Eventually, a demon woman emerges from Adah’s rear — and that’s not even the most bizarre twist in this deranged romp.

Ehrlich called it “a microbudget cross between ‘Salò, or the 120 Days of Sodom’ and “The Squid and the Whale,'” while Vack said he envisioned it as “starting in Woody Allen-Lena Dunham territory, then taking it into B-movie territory.” That said, he added, “I’d never even heard of a shock comedy before it was said about this movie. I thought I was making a snobby arthouse movie.”

That may sound like a dodge, but Vack speaks so eloquently about his creative ambitions that it’s almost as though — like “Assholes” itself — he exists in a world of his own making where putrid sex and inane arguments have been normalized by a society bent on self-destruction. These days, that might not be so far-fetched. “There are moments in this movie where you see upper-middle-class white people being racist and horrible, and unfortunately, it’s true,” he said.

“I want there to be movies that correct this virulent racism in our culture, but I wonder if we should stop making only films that pretend that problem isn’t there. Sometimes I think that the level of depravity that the characters go to in ‘Assholes,’ it feels to me like a corrective measure.” (Consider it for a double bill with “Get Out.”)

Vack knows that world all too well. He was raised on the Upper West Side, where his father was an entrepreneur who moonlighted as a low-budget film producer and his mother was a psychoanalyst. “I grew up idolizing the archetype of the neurotic New Yorker,” he said. “It felt like something I could connect to without effort.” But when he started writing about that world for “Assholes,” he hit a wall. Reeling from a breakup, he began working on a screenplay in which he imagined his ex complaining about him to a therapist. “It sort of was a way for me to exorcise some self-hatred,” he said. The sibling characters in the final version of the movie were lovers. Vack got as far as writing a bathroom sex scene in the first act, then stopped himself. “I had a visceral reaction to the writing. I hated it,” he said, as if the script had forced him to look in the mirror for the first time.

He tabled the project and began developing a very different script about online relationships, landing grant money from Sundance and a fellowship, which scored him mentorship from Miranda July and screenwriter Doug Wright. But the project demanded more resources and time, so after the check cleared for his “Mozart” gig, Vack decided to fast-track “Assholes” instead. He workshopped the script with his playwright friend Aaron Mark, who partly inspired the Aaron character.

During a table read, Vack’s sister played the girlfriend role even though Vack knew she could never play his ex-lover onscreen. That lead to an epiphany. “I realized the main conflict would be better if it was sibling rivalry,” he said. “Then we could draw on some of our past animosities to each other.”

Vack shot the movie on the fly, with his friends and family along for the ride, in the freewheeling traditions of Lloyd Kaufman or Roger Corman. He knew it wasn’t a commercial proposition. “There’s this part of my personality where I become obsessed with inappropriate jokes, almost to the point of mania, whether it’s in writing or in life,” he said. “It feels like an itch I can’t stop scratching. That sort of happened to me in the writing process and I became kind of tickled by it — how can I push this in the writing process, as a linguistic exercise?”

Needless to say, it was a less calculated move than his acting career to date. Vack has cropped up in a number of compelling sleeper hits on the festival circuit, including Leah Meyerhoff’s quirky relationship drama “I Believe in Unicorns” and the SXSW Grand Jury Prize winner “Fort Tilden.” Those movies, along with his “Mozart” role, find him playing less-than-likable characters. Onscreen, Vack has an icy, remote quality that lends itself to unsavory types. “I have played a lot of assholes,” he said. “Perhaps I made ‘Assholes’ to one-up all those roles.”

He made the movie behind his agent’s back. “They don’t know what to do with me as a filmmaker,” he said.

Judging by “Assholes,” Vack may not know, either. The movie’s cringe-worthy moments certainly hit hard, but much of the experience plays like a raucous, improvised dare; as a whole, it suggests the early stirrings of an artistic vision fueled by pure, unadulterated rage in search of a vessel. It’s not an easy sit, but there’s no doubting that Vack’s uncompromising look at detestable people reflects genuine convictions about them — right down to a climactic scene in which the main characters appear as humanoid versions of the titular appendage.

“To me, movies that are gross are about vulnerability,” he said. “In our most intimate relationships with family, we let ourselves become diseased, covered in shit. Our assholes do grow over our faces. We become our worst selves. That’s something I do struggle with.” His maternal grandfather struggled with addiction, and Vack began hearing dark stories about it as a child. “I grew up around a lot of fear of addiction in my family,” he said. “This movie is a manifestation of my mom’s worst nightmare, what could happen to her kids if they tried weed once or secretly became depraved sex addicts. I do exist in a sphere where there’s a lot of fear around losing yourself to impulse control.”

Naturally, “Assholes” has provoked strong reactions from audiences on the festival circuit, which has only intensified his convictions about it. “What can trigger people about this movie is that it feels pointless to them, and a part of me agrees,” he said. “That’s what’s beautiful about it. You think you’re going to get some meaning here. But the thing about life is that sometimes things just blow and have no meaning — especially with addiction, with relationships, with intimacy.”

He chuckled at the notion of using “recycled Amazon money” to fund his project. “I sometimes think Amazon should have a credit on this movie,” he said. He wasn’t sure yet if the blaring headlines around “Assholes” would impact his acting career, but didn’t sound too concerned. “Probably a lot of casting directors aren’t aware of this movie and never will be,” he said. “In the world of TV and big movies, they don’t even notice this shit.”

Still, he wasn’t sure about his next moves. “I’m not sure I can have the career where this sort of audacious, outrageous movie is all I ever do,” he said. “But that’s not to say I won’t do it again.” That’s either a promise or a threat.

This Article is related to: Film and tagged Assholes, Interview, Peter Vack