From James Wan to Karyn Kusama, Kiyoshi Kurosawa to Adam Wingard, we pick the best horror directors of a terrifying century (so far). 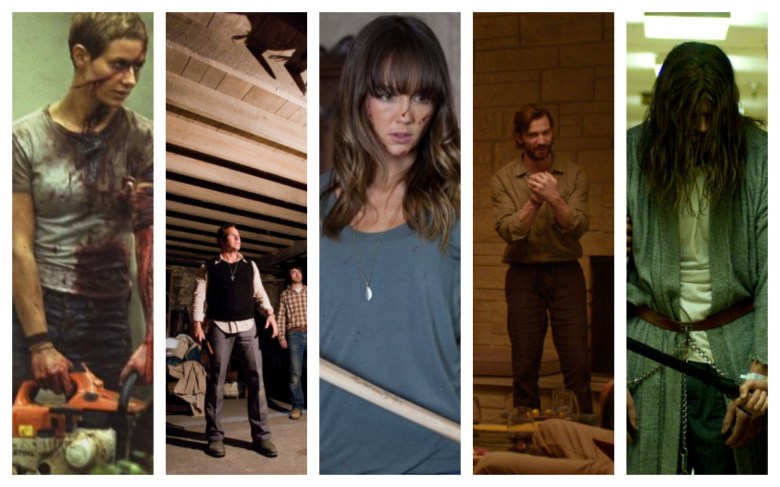 “It” may be a box office smash, but it’s hardly the only horror movie worth talking about these days. Just 17 years in, and the 21st century has already played home to a remarkable number of truly chilling and inventive horror offerings, from a resurgence in J-horror remakes to a continued affection for the classic series of yesteryear, to the massive dominance of the “Conjuring” movie universe and even a “Saw” franchise so dominant that it’s already cycled back into resurrection territory, and that’s just the mainstream stuff.

Aided by a new crop of filmmakers beholden to both their own obsessions and formative years steeped in the classics, the past two decades are shaping up to be some of the very best for the genre, with still more terror being turned out at a frightening clip. From visionaries like Guillermo del Toro and Gore Verbinksi, who can happily span genres while still keeping their love of horror running through every frame, to industry geniuses like James Wan and Eli Roth, it’s a great time to be a horror fan, but an even better one to be a horror filmmaker.

Read More: Why ‘The Conjuring’ Could Become the Biggest Horror Franchise of the Century

This list doesn’t include a handful of horror directors who are already making their mark — and drawing blood — from early efforts, including major emerging talents like Jordan Peele, Andy Muschietti, Robert Eggers, and Ana Lily Amirpour, though they are all certainly ones to watch. Instead, we’ve turned our attentions to filmmakers who have primarily terrified the aughts with a steady stream of the bloody, the terrifying, the creepy, and the extreme, with plenty more to come. Jeremy Saulnier became known as an exciting new genre talent with his tense revenge thriller “Blue Ruin” in 2013, but he first made overtures to the horror end of the spectrum a decade ago, with his debut feature “Murder Party.” This Williamsburg-set satiric nightmare about a Halloween party gone wrong managed to skewer hipster stereotypes while generating a genuine sense of dread; it was a terrific indication of things to come. “Blue Ruin” proved Saulnier could tell dark, bloody stories with a blend of first-rate thrills and slapstick. He confirmed his capacity to merge unlikely tones with “Green Room,” a survival story about an Oregon punk rock band surviving an onslaught of neo-Nazis that was equal parts gory showdown and wartime action drama. Saulnier pushes for the extremes of these genres, but they’re all terrifying and tense in ways that demonstrate remarkable skill. He’s essentially transforming our preconceived notions of what these kind of movies can do, and he’s just getting started. -Eric Kohn After his 2011 indie “Absentia,” Flanagan quickly made his mark as a genre leader by delivering several solid horror films which overdelivered on premises that could easily go south. 2013’s “Oculus” made an evil mirror scary, as he put Karen Gillan and Brenton Thwaites through the ringer with stylish gore and a deft hand. 2016’s “Hush” was a clever reinterpretation of the 1967 home invasion thriller “Wait Until Dark,” substituting Audrey Hepburn’s blind protagonist for a deaf woman, played by Flanagan’s wife, Kate Siegel. Able to use a small area — a single house — to maximum effect, Flanagan delivered perhaps his finest work, playing with space and sound to create a claustrophobic modern classic. He followed that film quickly with “Ouija: Origin of Evil” the same year, the rare sequel that bettered the original. While it may not have been tough to hurdle the underwhelming first film, Flanagan was able to take the franchise back in time to the late ’60s, and the “Mad Men”-meets-horror vibe dusted off the cobwebs from the board game’s lore and delivered genuine spooks along the way. In 2017, Flanagan triumphed again with a smart adaptation of “Gerald’s Game,” a Stephen King novel about sexual assault which featured a woman handcuffed to a bed alone for much of the plot. Long considered unadaptable, the director showed a different sensitivity in this work which left both fans and the author himself satisfied. A true student of the genre, it’s exciting to predict how Flanagan will tackle his next project, a Netflix series adaptation of Shirley Jackson’s “The Haunting of Hill House.” -William Earl Eli Roth only does one thing, but he does it pretty damn well. From the minute he broke through with “Cabin Fever” back in 2002, Roth has been single-minded about his obsession with shlock, the “Hostel” (and “Hostel: Part II”) director making movie after movie about horny kids dying horribly. But these grindhouse delights aren’t quite as simple as they might seem. For one thing, Roth has a rare understanding of how our most innocent adventures — a weekend getaway, a vacation to Europe, social activism in the Amazon — can curdle into nightmares. For another, his sadistic slaughter-fests are unusually keyed in to the freewheeling arrogance of (American) youth, and they have great fun putting these would-be Instagram models in their place. (That his latest film, “Knock Knock,” twists all these tropes shows some well-earned maturation and evolution on his part.) But the real reason that Roth’s films get under our skin is that they drop you into the kind of perfectly crafted predicaments that force you to think about how you might survive, and the answers never come as easily as you might hope. -David Ehrlich “Ring” and “The Grudge” may have received more attention worldwide, but no J-horror film has proven as prescient as 2001’s “Pulse.” A haunting look at how we live with (and on) the internet, it’s also emblematic of Kiyoshi Kurosawa’s slow-burning approach to terrifying his audience: The unease of watching his movies comes from imagining what’s lurking just out of frame, waiting for it to somehow be even more dreadful than the image you’ve conjured in your mind. What we end up seeing always manages to be more unnerving than what we imagined. He shows no signs of slowing down 16 years later, having premiered three different movies (at Berlin, Toronto, and Cannes, no less) in the last two years. And though he bears no relation to that other Kurosawa, he’s a master in his own right. -Michael Nordine Wingard’s love of gore with a throwback twist was apparent from his very outing — a pre-film school horror-comedy called “Home Sick” that he made at the tender age of 19 — and he’s managed to carry that sensibility through the last decade of his still-flourishing career while steadily increasing his scope and ambition. “A Horrible Way to Die” and “Autoerotic” were both festival finds, but Wingard’s work really hit its stride with 2011 breakout “You’re Next,” which took the tried-and-true “oh, look, a house filled with crazy murderers” trope to heightened (and sometimes even hilarious) new levels, bolstered by a star turn from Sharni Vinson in full Final Girl mode. Wingard and his long-time screenwriter partner Simon Barrett kept the momentum going with their followup, “The Guest,” which blended exploitation thriller with a serious affection for the male form, thanks to a killer role for Dan Stevens. Wingard always couches his horror in humor, but that never diminishes the power of his gorehound sensibilities. As he moves into the realm of large-scale remakes, from “Death Note” to a mostly overlooked “Blair Witch” rehash, plus his big play for blockbuster mayhem in “Godzilla vs. Kong,” here’s hoping he sticks to it. It would be scary as hell if he didn’t.  -Kate Erbland

Page 1 of 3
Continue Reading: The 15 Best Horror Directors of the 21st Century