Sustaining terror over hours, weeks, and years is no easy task, but these TV shows are a permanent part of our nightmares. 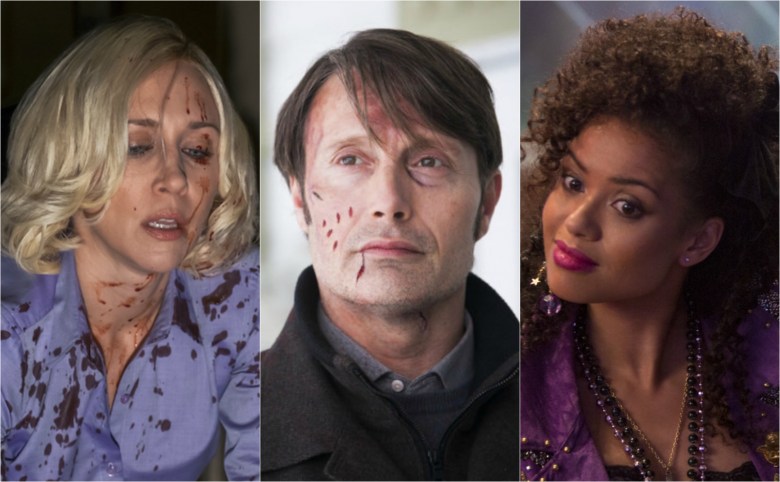 Fear can pop up anywhere, anytime, for any reason. Maybe you’re terrified of clowns or spiders or light switches. Maybe those triggers, if dwelled on just long enough, can cause a bead of sweat to roll down your brow or a jolt of panic to shoot through your veins. Everyone has that one thing (or a dozen) that gets under their skin.

The best horror shows don’t just recognize and emphasize these fears; they create new ones. They draw out those things that make an audience uncomfortable. They hone in on weaknesses, push them to the forefront of your mind, and contort them to nightmarish new levels.

Suddenly, you’re not thinking about your weird, childhood aversion to the switch that makes the lights go out; you’re worried about getting sucked into the Upside Down by a demogorgan or a serial killer wrapping you up in a clear tarp and dispersing your body parts in the gulf stream. You’re having nightmares of a flaming polar bear charging right at you or a dead-eyed, leather-clad Kyle MacLachlan tracking you down.

This is the power of great horror, and television has been filled with it for the past 20 years. Below, IndieWire has collected the best of the genre, and while it’s just in time for Halloween, these frights will haunt you year-round. Sure, HBO’s epic fantasy drama deals mainly with feudal politics and the occasional dragon, but it also wanders into horror territory with the creepy White Walkers who are able to reanimate the dead. These wights sometimes move frenetically, inspired by Ray Harryhausen’s stop-motion animated skeletons, and other times they even appear to be able to think and use logic. Regardless of how they’re interpreted though, they appear to have a never-ending appetite for killing. Add animal wights and a goddamned dragon wight into the mix, and you have some truly frightening undead critters. Based on novels written by Guillermo del Toro and Chuck Hogan — with a pilot directed by del Toro himself — FX’s “The Strain” was one of the craziest horror series made in recent memory, though it struggled to penetrate pop culture after its first season. It remains notable, however, for how it challenged horror TV ideas, especially when it came to how it created a timeline that was genuinely innovative in how it depicted the onslaught of the apocalypse. Plus, these were “vampires” that looked like nothing else we’d seen before, which is a whole other level of amazing.

Things that go bump in the night. Missing children. Creatures without faces. Where this Netflix series succeeds the most is in creating atmosphere — beautiful, eerie, and nostalgic all at once. The story of four young geeks who befriend a mysterious girl who turns their world “upside-down” somehow captures the heartwarming horror of the 1980s. The series enrobes itself in darkness and yet allows its youthful cast to shine the light through that murkiness. Furthermore, the sheer amount of references to pop culture and homages to ‘80s film are impressive and well done, but beyond all of that, the show is just plain fun. Not all great pieces of horror are scripted. Many entries in the recent true crime docuseries boom could work just as well in this spot, but there’s something about the way that “The Jinx” taps into a sociopath’s desire to be caught that makes it all the more horrifying. Andrew Jarecki’s profile of Robert Durst is a diabolical piece of subterfuge and obfuscation, taking a look at one man’s upsetting past and trying to separate truth from a horrifying facade. Even as the audience continues to sift through questions of presumed guilt or questionable alibis, there’s no escaping the real-life horror of these gruesome murders. Viewers are left to draw their own conclusions, but there’s always a reminder that these crimes had victims, regardless of who is held responsible. Liv Moore (Rose McIver) has her perfect life planned out for her until she attends a party one fateful night and gets turned into a zombie. Now she works in a morgue so she can ethically obtain the grey matter she needs to stay alive, and uses the residual memories from the brains to solve the victim’s murder. Basically “Veronica Mars” with a craving for brainsssss, this delightful action-comedy delivers a murder-mystery each episode to take care of those procedural cravings. Funnier than it is scary, the series doesn’t shy away from violence or real consequences. Death is real, but at least you can laugh about it with some marvelously macabre puns.

Page 1 of 4
Continue Reading: The 20 Best Horror TV Shows of the Last 20 Years

This Article is related to: Television and tagged Lists