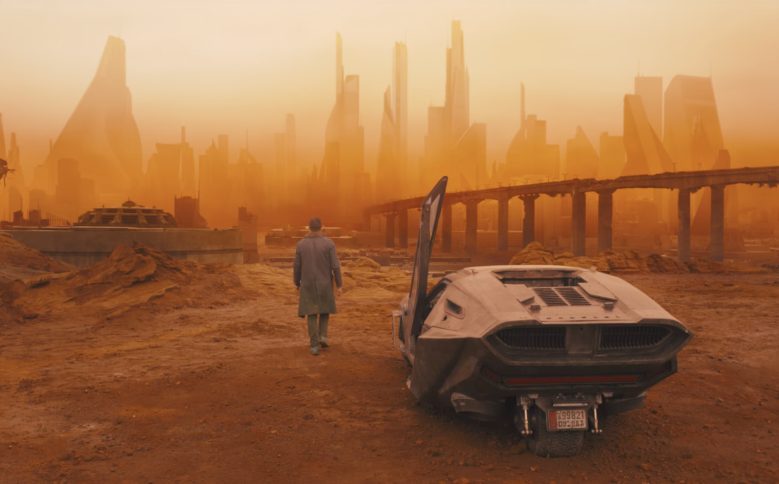 It was dead of winter in Montreal and the first thing that production designer Dennis Gassner asked director Denis Villeneuve was how to describe his vision for “Blade Runner 2019” in a single word. The answer: Brutality. Thus began the journey of incorporating the harsh climate of Villeneuve’s home city into the dystopian world of “Blade Runner” 30 years later.

For Gassner, it’s all about defining the pattern language and he had plenty of brutalist inspiration when scouting the angular, concrete buildings in Budapest, where they shot the movie — because London didn’t provide enough studio space. However, Gassner’s first priority was tackling an updated Spinner, the iconic flying police vehicle. “The Spinner would create the pattern language, which we could then spin-off into the rest of the world,” Gassner said. While the original Spinner driven by Harrison Ford’s Deckard had a soft quality, the one powered by Ryan Gosling’s K was more angular, robust, and brutal.

“It’s really a character in itself because it was an extension of who K was,” said Gassner. “We worked very hard at finding the tone for that. From there, came the rest of the environments. “It was always about going up against the elements… the sea wall to protect the city from flooding,” he added. “It was about survival for the people who remained in that world.”

A Brutal and Beautiful Wallace Building

Next came the design of the massive, 300-story Wallace building, the lair of inventor Wallace (Jared Leto), the Zen-like creator of the new, more subservient replicants. Surrounded by three towers, the exterior looks very brutalistic, but the interior exudes an inviting warmth.

“The other lesson that came out of the pattern language was a brutal scale that played against the harshness of the environment,” said Gassner. “The big objective was no sunlight except for the Wallace building. It was entertainment for a blind man to create illusions…his own sunlight, his own caustic light that was a big part of what [cinematographer] Roger [Deakins] and I talked about with Denis. We wanted it to have that reaching for the sky power: Larger scale and brutality set against artificial warmth that Wallace controlled.”

Inspired by an ancient temple in Kyoto, Wallace’s office became a giant temple of caustic light gently beating against the wooden walls and floors. Then there was the strange plug-in vision of Wallace (what they called the barracuda probes). This was a fun idea that provided his sight,” Gassner said. “He was the most high-tech person in this world and Denis wanted the rest to be more analogue.”

The biggest irony for Gassner was returning to the design of Las Vegas. He worked as a graphic artist on Francis Ford Coppola’s “One From the Heart,” and wound up providing Ridley Scott with all of the leftover neon lighting, which he purchased for “Blade Runner.” Then Gassner designed the original ’40s-era Vegas strip for “Bugsy “(which earned him an Oscar).

But for “Blade Runner” 2049,” Vegas underwent a dystopian-like transformation. Villeneuve wanted a red desert, taken literally from the Italian classic, “The Red Desert,” and Gassner took it from there with a team of designers that included Syd Mead, the “visual futurist” for “Blade Runner.”

“Vegas today has become this lustful environment, so we wanted to go beyond that with Romanesque gods of sex,” said Gassner. “The Sculpture Garden was something that Denis found and that was an environment we ended up using. The bees were a beautiful moment where there is life. Because the landscape looks so toxic, it became a safe haven for Deckard. He’s like Kurtz from ‘Apocalypse Now’ waiting for someone and that someone is K.”

The hotel, casino, and showroom were very much old-fashioned throwbacks, but the showdown between K and Deckard in the showroom, a holographic funhouse featuring a glitching Elvis, epitomized the ersatz nostalgia of Vegas and the artificial ethos of “Blade Runner.”

“It’s eventually what Vegas has become for everybody,” Gassner said. “Everything had to be glitchy because it was a world that was sputtering along.”

This Article is related to: Awards and tagged Blade Runner 2049, Dennis Gassner, Oscars, production design, Top of the Line