If the King in the North requests a Jon Snow day, who could refuse? 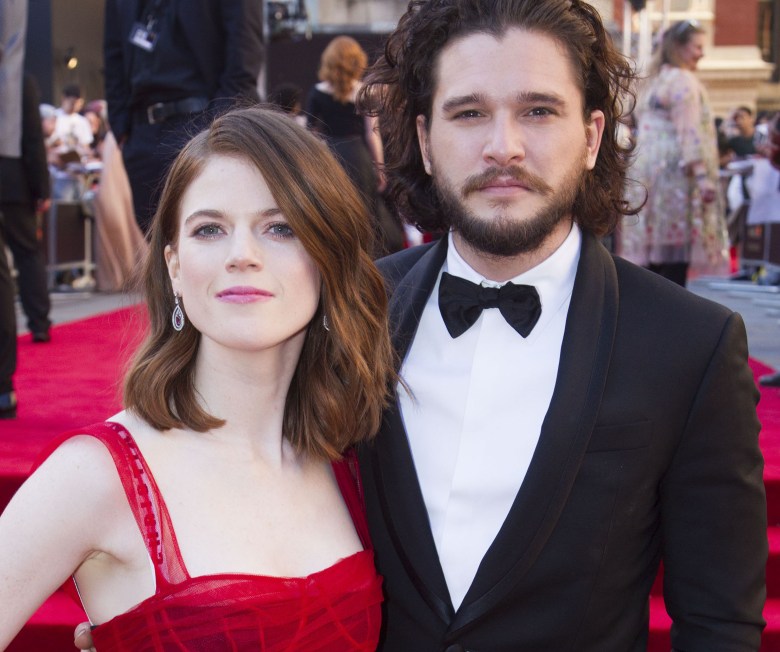 A shifted filming schedule isn’t the only reason that “Game of Thrones” might be delayed longer than some fans would have hoped. It turns out that Kit Harington has asked the producers to shut down production for one very special day.

On the UK’s “Jonathan Ross Show” this weekend, Harington revealed that he and co-star Rose Leslie will be tying the knot during the period when the final season would be filming. According to a report by the Radio Times, they have so many friends among the cast and crew that naturally everyone from “Game of Thrones” would need to attend.

“I rang [the producer] up and I said, ‘I’m getting married and it’s your fault actually,’” says the actor. “I think for the final season he is so stressed that he’s reached that peaceful level.

“I was like, ‘You need to factor in a “Game of Thrones” wedding by the way.’ They [the cast] have all got to be there so the whole thing has got to shut down.” Of course, the wedding should only take a day, two tops if there’s some residual partying, so we can’t lay the blame of a delayed season at his doorstep. In fact, the nuptials couldn’t have come at a better time. With the show delayed at least a year fans can be on the lookout for the wedding photos and imagine it as a happier “Game of Thrones” alternate reality, one in which weddings are fun events that don’t end with assassinations.

Read More: ‘Game of Thrones’ is Filming Season 8 Until Summer 2018 (Which Means We Won’t See it For A While)

Details about the big day haven’t been revealed yet, but the cast will be the only “Game of Thrones” presence there. Harington nixed the idea of costumes. “No. There is absolutely no chance of me convincing [Rose] of that,” he said. It’s probably for the best since weddings on “Game of Thrones” haven’t had the best track record. Joffrey’s Purple Wedding resulted in his death by poisoned wine, while the Red Wedding ended with many Starks and one direwolf dead.  It’s a safe bet that “The Rains of Castamere” will not be in the DJ’s rotation for the reception.

Harington and Leslie, both 30, met on the set of “Game of Thrones” when she joined in the second season. Long before Jon Snow became King in the North, he was just a lowly bastard making his way to the Wall to join the Night’s Watch. Leslie played Ygritte, a wildling lass who was “kissed by fire,” aka a lucky redhead. She captured him and eventually fell for his brooding ways, and the couple’s tryst in a cave stands out as one of the most loving and positive interactions between men and women on the show so far. Sadly, her character was killed off two years later, but at least in real life, their love has remained strong.

Leslie also appeared at the “Game of Thrones” Season 7 premiere earlier this year, recording a cheeky “no spoilers” audio intro in character alongside her fiance. “Lords, ladies, wildings, bastards, and CAA agents,” Harington addressed the audience at Walt Disney Concert Hall in Downtown Los Angeles in July. “We must swear our sacred oath: Night gathers, and now our watch begins. I shall take no photos, hold no phones, spread no rumors on social media. I am the shield that guards the realm of men from spoilers. I pledge my life and honor to tonight’s watch, for this night and all the nights to come… until Sunday.”

Leslie then added her signature line, “You know nothing, Jon Snow.”

Check out all the photos from the premiere here.

This Article is related to: Television and tagged Game of Thrones, HBO, Kit Harington, Rose Leslie