Jordan Peele's movie was a commercial phenomenon and a critical darling. Now, it's entering awards season with plenty of momentum. 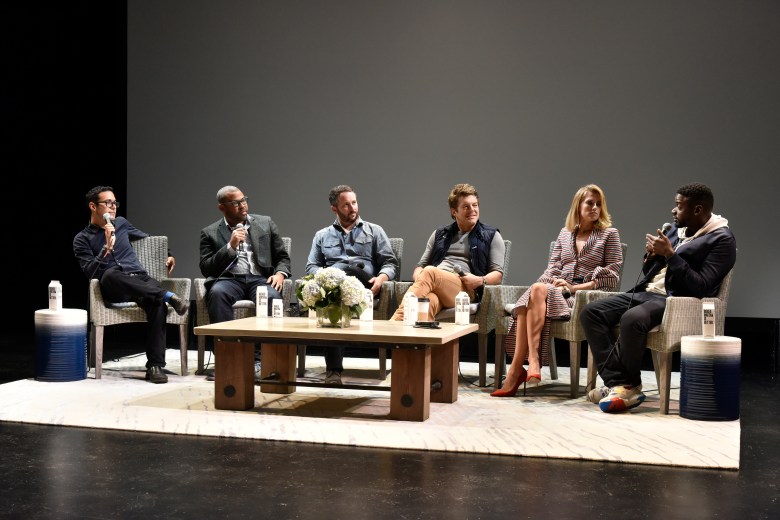 (Editor’s Note: IndieWire is highlighting the best of our 2018 Oscar coverage, with support from Apple iTunes. Watch “Get Out” and other contenders at iTunes.com/Oscars.)

Warning: This story contains spoilers for the movie “Get Out.”

When “Get Out” premiered in a secret midnight slot at the 2017 Sundance Film Festival, nobody could have predicted it would become a cultural phenomenon. The $4.5 million Blumhouse production was billed as a satiric horror movie about race, directed by former “Key & Peele” sketch comedian Jordan Peele in his feature-length debut, and a cursory reading of those details suggested a wacky spoof of the “Scary Movie” variety.

Instead, Peele had made a genre-defying look at race relations in America, merging the interracial dynamics of “Guess Who’s Coming to Dinner?” with an outrageous B-movie premise worthy of George Romero. That premise — which finds wealthy white liberals using hypnosis and brain surgery to turn black people into their slaves — skewered the notion of a post-racial America from multiple directions at once, setting aside more obvious targets to unearth some of the worst aspects of black-white tensions hiding in plain sight.

It was a hilarious, shocking, and bitter pill, just the one American needed in the wake of the 2016 election. “Get Out” easily crossed $100 million in less than a month, the first African American-directed film to do so, and eventually grossed $253 million worldwide. Peele and his MonkeyPaw Prods. suddenly became one of Hollywood’s hottest new entities, and he shrugged off studio offers to direct existing properties with plans to further more original ideas.

Fans launched the #GetOutChallenge on social media, recreating one iconic scene from the movie in which a strange man runs directly at the camera only to change directions at the last moment, a perfect encapsulation of the absurd fear that haunts African Americans in public every day. It inspired multiple editorials in the New York Times and a whole genre of fan art. The movie’s scary-funny tone epitomized the zeitgeist. Now, “Get Out” can add another notch to its belt: Oscar contender. While genre movies that crack the Oscar race often have more obvious highbrow aspirations — think “Black Swan” — “Get Out” won so many fans from so many places, finding commercial and critical success, that it managed to sustain visibility all year. Universal Pictures is well positioned to capitalize on that hype for awards season, pushing Peele as a strong contender for best director and original screenplay. A best-picture nomination isn’t unthinkable, either.

I saw the hysteria first-hand in early October at the Hamptons International Film Festival, where artistic director David Nugent invited me to moderate a conversation with Peele, producers Sean McKittrick and Jason Blum, and stars Alison Williams and Daniel Kaluuya. The setting was a hilariously savvy gamble: The Hamptons’ predominantly white, upper-class moviegoers — hundreds of Academy voters among them — closely resembled the movie’s affluent maniacs. But I heard from many Hamptons regulars who loved “Get Out.” In skewering racism from a surreal perspective without negating its entertainment value, the movie united America.

“Get Out” consolidates the bumpy road of racial discourse from the past decade. Peele started writing it after the election of Barack Obama, but completed it in the aftermath of his successor. “We were hoping racism was done,” he said in the discussion. “It felt like, if you were calling racism out, you were perpetuating it.”

After the emergence of Black Lives Matter, however, “there was this strange convergence of the reality of the society and a certain readiness to deal with this movie.” He assumed from the outset that nobody would want to make a movie on the subject, and the script festered for years before QC Entertainment’s McKittrick brought it to Blum. “I thought people would not want to go there,” Peele said. “By the time it came out, it felt like people were ready to sit down and deal with it, but they also needed an escape.”

The movie’s screenplay and filmmaking choices reflect Peele’s ability to walk that line between harsh truths and escapism. Prior to the Hamptons event, I worked with Peele to select five scenes that best illustrate its careful balancing act. Check them out on the next page.

Page 1 of 2
Continue Reading: ‘Get Out’ is a Serious Oscar Contender, and These 5 Scenes Prove It

This Article is related to: Awards and tagged Consider This, Get Out, iTunes-GO, Jordan Peele