If you're looking to brush up on the latest terrifying movie experiences this Halloween, here are your best options. 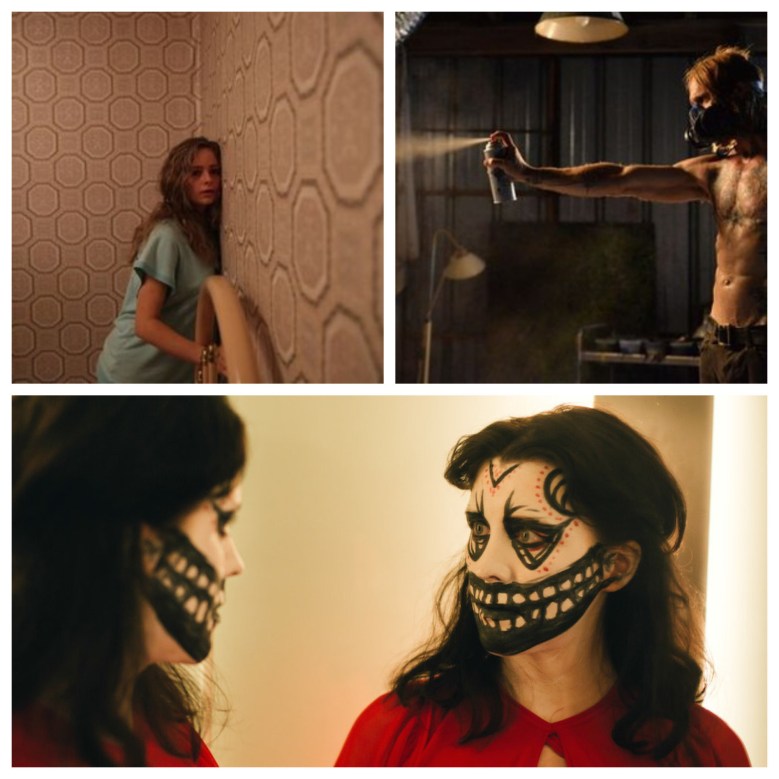 Clockwise from left: “Hounds of Love,” “The Devil’s Candy,” “Prevenge” There are many movies about horror in the woods, but “It Comes at Night” stretches that trope into a paranoid head trip. Writer-director Trey Shults’ sophomore effort follows up on the promise of his tense family drama “Krisha” with another expertly-told look at family bonds jeopardized within the claustrophobic boundaries of a creepy home. This time, however, the stakes have gone beyond the challenges of addiction and estrangement to involve matters of life and death. Once again, Shults has delivered a top-notch psychological thriller (in this case, aided by first-rate turns by Joel Edgerton and Christopher Abbott), but “It Comes at Night” builds an unnerving atmosphere around unspecified sci-fi circumstances. Its central premise involves the struggles of a family unit in the aftermath of a plague that seems to have wiped out much of civilization. That much may sound familiar, but it’s only a starting point for more unpredictable turns — namely, the arrival of more survivors whose needs jeopardize the semblance of a stable existence at the end of the world. The families could join forces to survive, but paranoia gets the best of both sides, and the suspenseful climax suggests that even good intentions can have terrible consequences. There’s nothing scarier than Mark Duplass with a ponytail. Patrick Brice’s 2014 Blumhouse-produced “Creep” stood out from the Paranormal Activities of the world in that the monster was essentially a variation on the Duplassian doofus that the actor has played in countless freewheeling comedies since he and his brother Jay’s breakthrough directorial debut “The Puffy Chair.” In “Creep,” he spent most of the movie as a mysterious character of unknown origins, mugging for the camera of a cinematographer he hired and claiming he needed a record of his life before succumbing to an unspecified disease; as it turned out, his intentions were far more nefarious. This was a slasher film in disguise. In “Creep 2,” he’s back, with a potential foil: Goth girl Sara (Desiree Akhavan), the star of a failing online video series called “Encounters” in which she mostly just hangs out with lonely guys. In short order, Duplass’ Aaron reveals his murderous antics to Sara and invites her to film him over the next 24 hours. Eager to capture some real excitement for her show, she plays along, and for the next hour and change it’s unclear who has the upper hand. While it’s hard to take the cheeky tone seriously, that’s the fundamental aspect of the “Creep” movies that allows them to, well, creep up on you. As Aaron dashes around the house telling stories of his troubled youth and begging Sara to kill him, it’s as though we’re watching a serial killer’s version of a romcom, one that puts the “sick” in lovesick. Like all of Yorgos Lanthimos’ movies, “The Killing of a Sacred Deer” has a bizarre concept that the director carries through with utter seriousness: a guilt-ridden surgeon (Colin Farrell) finds his family under attack by the teenage son of a late patient, who somehow forces the doctor into choosing to kill one member of his family. While “The Lobster” showed Lanthimos’ gentler side, “Sacred Deer” brings him back to “Dogtooth” territory with another unsettling depiction of a family driven to dark extremes. But nothing in Lanthimos’ oeuvre can prepare you for the suspense of watching this family gradually suffer at the hands of an inexplicable threat, one that can only end with a terrifying climax. In essence, this is Lanthimos’ first full-blooded horror movie, one that trades obvious spooky developments for a more deep-seated sense of the unknown powers that can destroy a stable suburban life. In Lanthimos’ world, nobody has it easy, and escape is impossible.

“The Girl With All the Gifts” “The Girl With All the Gifts”

The scariest aspect of most zombies movies is the way they transform the familiar human visage into a grotesque, unthinking, carnivorous beast. “The Girl With All the Gifts,” director Colm McCarthy’s smart and elegant adaptation of M.R. Carey’s novel, inverts that formula by turning one zombie into the star of the show and giving her the innocent face of a child. As Melanie, the infected adolescent at the center of this minimalist thriller, newcomer Sennia Nanua delivers a startling performance by bringing a gentle quality to horrific circumstances. This isn’t your average zombie survival story: The zombie is the star of the show, and you actually want her to survive. Those sympathies take the story in a series of surprising directions, none more thought-provoking — and frightening — than the finale.

Osgood Perkins’ directorial debut unfolds at an isolated prep school where teen students Kat (Kiernan Shipka, a far cry from Sally Draper territory) and Rose (Lucy Boynton, “Sing Street”) find themselves mysteriously abandoned by their parents over winter break when the rest of the students and faculty vanish. That scenario is paired with another surrounding a nomadic young woman named Joan (Emma Roberts) who’s waiting for a train to Bramford in the dead of night when she’s picked up by an older couple heading that way. Like the younger women in the other plot line, she’s strangely withdrawn, possessed by some unspoken dread that only rears its terrible head in the final act. These dreary proceedings are underscored by a low, groaning score that hints at something awful around the corner, often drawing us closer to the scene to connect the dots: Are these events unfolding at the same time? Do the characters in both stories know each other? What was that about Satanic worship? And: Is there any significance to the name of the Connecticut town where the school is based and the apartment building in a certain classic Roman Polanski horror movie? All of those questions are answered to varying degrees in this unsettling mood piece, which will keep you guessing until the very end, and trembling long after.

Six years after “The Loved Ones,” Sean Byrne’s gripping tale of a murderous prom queen, the Australian director finally returns with an equally ominous tale of a home invasion in rural Texas. On paper, “The Devil’s Candy” may sound fairly routine — nice family moves into isolated home and deals with the fallout of murderous events from its past — but Byrne’s artful use of image and sound takes the narrative to a whole new level. Heavy metal music dominates the soundtrack, as well as the characters’ lives, providing an ideal conduit for the demonic forces lurking beneath the story’s surface. After the mentally disturbed Ray (Pruitt Taylor Vince) kills his parents and leaves his house, it’s quickly inhabited by long-haired painter Jesse (Ethan Embry), his wife (Shiri Appleby) and their young daughter (Kiara Glasco). In short order, Ray shows up at the doorstep, mumbling about voices in his head and murder on his mind. Meanwhile, Jesse copes with beastly forces crowding his own subconscious, and pours the madness into his paintings. The film erupts into a series of ominous showdowns, with Byrne’s images turning the usual psychotic killer routine into a gorgeous rumination on the thin line between passion and madness.

This Article is related to: Film and tagged Halloween, Horror