The Jessica Rothe-starring and Jason Blum-produced college-set horror film only works when it goes full camp. 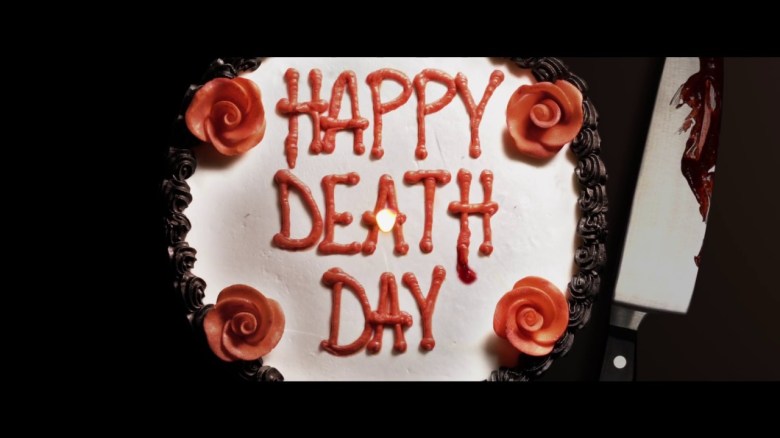 Christopher B. Landon’s “Happy Death Day” doesn’t break out its first “Groundhog Day” joke until well into its third act, but the Jason Blum-produced horror film wears its cinematic pedigree with seeming pride. You can practically hear the pitch that sold the film: it’s the classic Bill Murray comedy, but as a horror film — and centered on a bratty co-ed who gets brutally murdered every night, and is forced to relive the whole thing the next day.

Even the most basic of building blocks are in place, from an initially unlikable protagonist to a generous serving of montages and even an overarching message about the power of being a good person (at one point, a character screams, “love is love!” and it’s both totally endearing and hilariously out of place). But while such a formula has been memorably applied to other genres with strong results — earlier this year, it even worked for the dramatic YA offering “Before I Fall” — “Happy Death Day” may actually be too beholden to its forebears, if only because this horror film is at its very best when it’s being funny.

Teresa (Jessica Rothe) — or “Tree” as she likes to be called — isn’t a nice person. She’s a spoiled sorority girl mostly interested in partying and keeping all of her relationships at a very safe distance. When she wakes up in an unfamiliar dorm room the morning after a wild night out, she’s disgusted by the adorably dweeby Carter (Israel Broussard) and his good-natured attempts to keep their apparent one-night stand going. She’s off with a shot, out the door and thrust into a day that we’re about to become very familiar with, one that always wraps up with her vicious murder.

Scott Lobdell’s script and Landon’s sharp directing ably introduce key scenarios and important characters immediately — that first walk through Tree’s repeated day provides a number of hints of things to look out for and people to pay attention to — before routinely twisting certain elements to keep the plot moving along.

Tree adapts relatively quickly to her horrific circumstances, and a montage of her repeating her day over and over (and over and over) in an attempt to rustle up her killer’s identity is amusingly set to Demi Lovato’s party banger “Confident,” easily the year’s most incongruous and weirdly effective soundtrack choice. Initially aided by Carter (who, in true “Groundhog Day” style, Tree has to repeatedly explain her situation to, not always with great results), Tree believes that the key to everything is to simply identify her killer, a quest made all the more complicated by a series of hilariously convoluted kill scenes and the fact that her perpetrator wears a giant baby mask (her college mascot is the baby, apparently a reference to the king cakes of New Orleans, where the film is set) that she never quite thinks to pull off of their face. The mask itself is indicative of some of the film’s worst genre trappings, which lean heavily on cheap tricks to telegraph terror. The mask is creepy, and so is the tendency of the killer to just lurk, standing around gently swaying, looking like a menace but not actually doing much beyond, well, wearing a weird mask and standing there. “Happy Death Day” isn’t particularly bloody, and most kills are shallow because they arrive after the film’s score ratchets way up, as if to announce, “a jump scare is coming, get ready for it, here it is, oh look, time to jump!” (Insert jump scare here.)

That’s not to say there aren’t some interesting ideas at play here, and Lobdell’s screenplay builds in exactly one compelling twist to the “Groundhog Day” formula, the kind that has actual stakes for Tree and promises some sort of end to its repetitive shenanigans. Despite a darkly amusing first and second act, bolstered by the sense that the charismatic Rothe is having a ton of fun as Tree, its final act spirals out into cheap misdirects and even worse narrative revelations. Whole chunks just don’t make sense, even after the script tries to patch over them by again utilizing the narrative tricks that “Happy Death Day” is initially built on. You want repetition? You got it, though not enough to make you forget the wide swathes of story that never add up.

When Landon moves away from the darker parts of the film, opting to play up the campier elements of a mostly silly story, “Happy Death Day” is the kind of dizzy fun as slasher horror can possibly be. Too bad then that all that goodwill has to reset every night, pushing everything back to square one just as it was getting good, murderously so.