Kimmel may be the only broadcasting figure left in the fifth estate able to make this kind of difference. 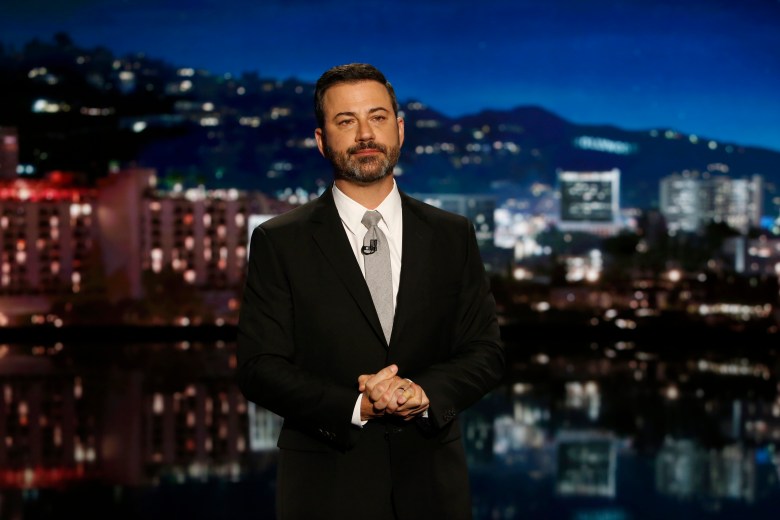 A true broadcaster is a master of communication, someone who reaches a wide audience and can be trusted for the information they need. And unlike other late-night TV stars, Kimmel didn’t rise through the ranks of acting or stand-up comedy; he honed his skills as a radio personality. A much more intimate medium, radio was the place where personalities formed direct bonds with listeners long before social media.

The power of the “fifth estate” has waned in recent years — but Kimmel clearly never forgot the importance of the public airwaves. He’s fulfilling the classic role of broadcaster as a guide in a time of crisis. When ABC launched “Jimmy Kimmel Live!” in 2003, “nation’s moral conscience” presumably wasn’t part of the content strategy. But after nearly 15 years, he’s up to the challenge with his combination of information, outrage, humor, and action.

As others noted, Kimmel’s take on health care and, now, the Las Vegas shootings, was deeply personal. His experience navigating the health care system after the birth of his son, Billy, gave Kimmel the impetus to speak as politicians threaten to undo coverage for millions of Americans. Last month, when Sen. Bill Cassidy went back on his promise to support a health care plan that passed the “Jimmy Kimmel test,” Kimmel took him on in his monologue with a well-researched, yet humble, response. My area of expertise is eating pizza, and that’s really about it. But we can’t let them do this to our children, our senior citizens, and our veterans, or to any of us. Health care is complicated. It’s boring. I don’t want to talk about it. The details are confusing. And that’s what these guys are relying on. They’re counting on you to be so overwhelmed with all the information, you just trust them to take care of you… [but] this guy, Bill Cassidy, just lied right to my face.

History will show that it was perhaps Kimmel, more than any other pundit or politician, who helped defeat the latest attempt to yank healthcare coverage from millions of Americans.

Then came Sunday’s massacre in Las Vegas. On Monday, every late-night host had something to say about the Las Vegas shooting. All said it well, but it’s no surprise that Stephen Colbert, Seth Meyers, and Trevor Noah have expert takes on issues. They’re all pros, and brilliant at what they do. What makes Kimmel so powerful is when he speaks, it’s not expected. He’s the “every man,” giving a voice to how people who don’t normally travel in politics really feel. It’s why he can’t be dismissed.

“I want this to be a comedy show,” said Kimmel, who moved to Las Vegas when he was nine. “I hate talking about stuff like this. I just want to laugh about things every night, but it seems to be increasingly difficult lately. It feels like someone has opened a window to hell.”

He devoted the six-minute monologue to the tragedy, fighting back tears.

We’ll pray for Las Vegas, some of us will get motivated, some of us won’t get motivated, bills will be written, bills will be watered down, bills will fail, the NRA will smother it all with money – and, over time, we’ll get distracted and move on to the next thing. There are a lot of things we can do about it. But we don’t. which is interesting, because when someone with a beard attacks us – we tap phones, we invoke travel bans, we build walls… we take every possible precaution to make sure it doesn’t happen again. But when an American – buys a gun and kills other Americans – then there’s nothing we can do about that. Because the second amendment, I guess, our forefathers wanted us to have AK-47s is the argument, I assume. He’s not playing — Kimmel is calling out the hypocrisy of politicians who lie, or who vote against the public interest. And reminding Americans that they can do something about it.

Kimmel’s recent moments of political and social clarity have been compared to another legendary broadcaster, Walter Cronkite, whose take on Vietnam changed public opinion of the war. But in many ways, Kimmel’s stature in 2017 is even more reminiscent of his idol David Letterman — another broadcaster who began in radio before moving on to comedy and a landmark place in late night. Letterman knew exactly the right tone and tack to take on issues of national importance.

And Letterman, like Kimmel, was uncomfortable with having to depart from his show’s normal routine — but knew exactly how to address a nation in pain (such as after the 9/11 terrorist attacks), or take on an injustice.

For many Angelenos, the ones who still remember him as “Jimmy the Sports Guy” on KROQ-FM’s “Kevin and Bean Show,” the transformation of Jimmy Kimmel is nothing short of remarkable.

Even on a national level, plenty of fans still remember Kimmel as Ben Stein’s wiseass sidekick on “Win Ben Stein’s Money” or a lovable lothario, with Adam Carolla, on “The Man Show.” But that was 15 years ago, and just like Letterman evolved, Jimmy Kimmel has skillfully become the moral conscience of the nation.

He still likes a good prank call or fart joke. And he’s still the everyman. He grew up middle class, likes to cook for his pals, surrounds himself with family and friends, and knows when not to take himself too seriously.

But that’s what makes his role more effective: Like most of us, Kimmel isn’t defined by politics, but will address it head on when it becomes personal.

Unlike the golden age of broadcasting and the height of the fifth estate, it’s difficult these days for a single voice to make a difference. The media has become so fragmented, and audiences now flock to voices parroting what they want to hear. Jimmy Kimmel may be a bit of a dying breed: The broadcaster who Americans can trust for moral clarity. He may not have expected to fill that role, but thank goodness he was there, and ready for it.