"Jungle" lacks the flair and feeling of "Swiss Army Man," but it's somehow even more disgusting than Radcliffe's last wilderness adventure. 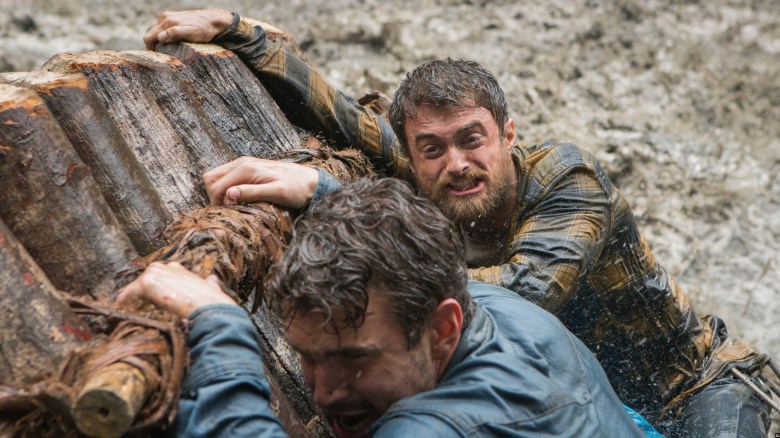 In the years since hanging up his quidditch broom, Daniel Radcliffe has blazed a surprisingly adventurous trail, devoting himself to risky projects that stray far from the beaten path, some of them quite literally. For the second time in the last 18 months, the former “Harry Potter” star has wandered off into the wilderness, following the miraculously inventive “Swiss Army Man” with a true-life survival story about a restless Israeli kid who wound up stranded by himself in an uncharted stretch of the Amazon. And while “Jungle” glaringly lacks the flair and depth of feeling that defined Radcliffe’s previous stroll through the great outdoors, it’s somehow even more disgusting than “Swiss Army Man,” a movie in which the actor plays a corpse whose farts are so explosive that they propel his body across the surface of the ocean like a jet ski.

“I was desperate to escape the well-worn path,” Yossi Ghinsberg intones during the film’s opening voiceover, the narration giving us a chance to acclimate to Radcliffe’s strong but convincing Tel Aviv accent. It’s 1981, Ghinsberg is 21 years old, and he’s happily willing to risk death just for the chance to be different (spoiler alert: this film is adapted from a memoir that Ghinsberg wrote in 2005).

We meet him as he arrives in central Bolivia, scruffy and invincible and eager to prove — to us, and to himself —  that he’s living his life to the fullest. He’s not the only one. Ghinsberg hasn’t been on the ground five minutes when he meets a fellow traveler named Marcus (Joel Jackson), a wandering schoolteacher with “the heart of a poet and the soul of a saint.” By the end of his first day, our hero is doing psychedelic jungle drugs with the beautiful girl who’s sleeping in the next tent over. By the end of his first week, Ghinsberg has grown inseparable from Marcus and his friend Kevin (Alex Russell), a dashing American photographer who could easily be mistaken for a young Eric Bana.

So when Ghinsberg is randomly approached by Karl (Thomas Kretschmann), a German-born geologist who offers to guide him off the map and into the heart of Inca territory, he naturally convinces his new friends to come along for the ride. Ghinsberg, determined but oblivious, fails to notice how shadily Karl is shot, or that Johnny Klimek’s otherwise woody and flavorful score tenses into a knot of ominous strings whenever the guy is on camera.

And so begins their journey into the green and febrile world of Werner Herzog’s fever dreams, only stopping so they can eat a monkey or listen to Karl mutter ominous aphorisms like “The jungle shows us who we really are.” The film’s emphasis on its environment is to be expected from Australian horror guru Greg McLean, who transformed the Outback into a slaughterhouse in “Wolf Creek,” and took the idea of corporate headhunters a little too literally in his workplace battle royal, “The Belko Experiment.”

And “Jungle” is most effective when it plays to its director’s strengths and keys into the violence of a place that has no interest in accommodating human life — Karl’s shiftiness aside, the Amazon unburdens McLean of the need for shotguns or serial killers, as none of those things are necessary in a verdant hellscape full of fire ants, brutal rapids, and hidden jaguars. It’s unclear what exactly is eating the flesh off Marcus’ gooey feet, but it can’t be good. And let’s not talk about the worm that hatches from the bump on Ghinsberg’s head, okay? People will never grow tired of movies about hapless white kids wandering off where they don’t belong, and McLean seasons that particular to perfection, maintaining a fine balance between horror and excitement; fear and strength. Justin Monjo’s script falls apart like dead skin as soon as Ghinsberg is separated from the group (and the group is separated from each other), but he deserves credit for complicating these characters beyond easy archetypes, just as the actors who play them should be commended for the relative nuance of their performances, each one of them harboring his own measure of self-doubt and suspicion.

It’s a shame that “Jungle” doesn’t further explore Ghinsberg’s motivating obsession with weakness, but you get the sense that Ghinsberg himself is trying to ignore it (exposing a weakness of a different sort). His unexamined nature only becomes a problem once he starts to starve, prompting a string of hallucinations and flashbacks that expose just how little we care about the kid, and how little we care to learn. Madness is difficult to convey on screen, and less is often more. McLean opts for most, sacrificing Radcliffe performance — so alert and responsive that you can feel the life draining out of his body once the Amazon takes hold — at the altar of some empty affectations. It’s true that Ghinsberg really did have visions of a half-naked Inca girl, and that he survived by trying to keep her safe, but her importance is lost in a tiresome haze of details as “Jungle” merely signifies madness instead of inviting us to see it for ourselves.

Yossi Ghinsberg journeyed a long way just to realize that strength comes from within, or to learn that the real adventure is the friends we meet along the way. This film about him is highly watchable before it wears thin, but the only thing it fully conveys about his adventure is that the experience could have been a lot better if he’d made just a few different choices.

“Jungle” opens in theaters and on VOD on Friday, October 20.

This Article is related to: Film and tagged Daniel Radcliffe, Jungle, Reviews