Creators Michele Fazekas and Tara Butters set out to combat hopelessness with their new series starring Jason Ritter, perhaps "one of the best people ever." 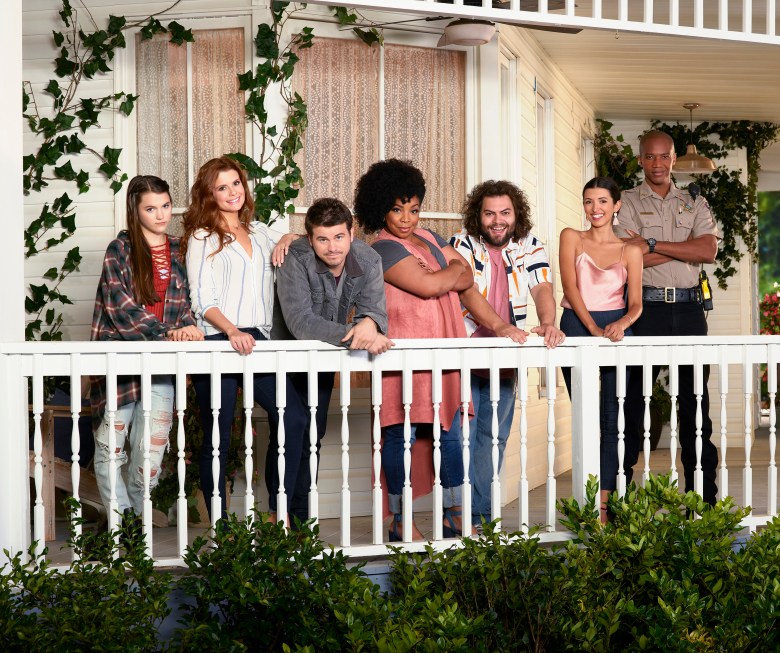 Michele Fazekas and Tara Butters admit their new ABC series, “Kevin (Probably) Saves the World,” is a bit hard to explain at first. But it comes down to this easy message: “Don’t be a jerk.”

Jason Ritter stars as Kevin Finn, a selfish and clueless man who hits rock bottom and decides to move home to Texas and live with his widowed twin sister Amy, played by JoAnna Garcia Swisher, and his teenage niece Reese. Once night, a mysterious meteor lands near their house, and Kevin starts to see visions – of a woman named Yvette, who claims to be a warrior for God. Yvette tells Kevin he’s the last of the 36 righteous on earth. Now, he needs to recruit the rest of a new batch of 35.

“In the last couple years and with the election, it didn’t matter politically if you were left or right — it felt like people felt hopelessness,” Butters said. “A lot of entertainment thrives on hopelessness. It’s all about a negative outlook on humanity. That was something we wanted to dive into, and show the amazing parts of humanity.” Learn more about the show’s message and mythology below.

“There’s mythology, but week to week he’s helping people,” Fazekas said. “You see the effect that he has on other people. People can anonymously be dicks to each other. You start to wonder, this will never change. I like the idea that maybe it doesn’t have to be terrible.”

Fazekas and Butters have plenty of experience mixing comedy and drama, including “Marvel’s Agent Carter” and the late lamented “Reaper.” They also tackled spirituality in “Resurrection.” In creating “Kevin Probably Saves the World,” they were inspired by their early career work on “The X-Files,” and the idea of mixing stand-alone stories with more serialized elements. “Part of our thing was, let’s do the ‘X-Files’ model,” Fazekas added. “You have mythology that spans multiple episodes and stories that wrap up. Tara and I were both assistants on that show. You have something for everybody. Have individual small stories you can jump into no matter what and then the character stuff can span multiple episodes.”

Fazekas and Butters also rave about their star, Ritter, who auditioned for “Kevin” on his birthday. “He was so spot on,” Butters said. Not only is he one of the most talented actors we’ve ever worked with, but probably the best people.”

As for where the show goes from here, there are plenty of reveals to come: “Yvette, she’s not telling the entire truth,” Fazekas said. Shes omitting big parts of the story. Those will come out, we will see more of what her goal and agenda is. She is not being totally honest.” Below, the trailer for “Kevin (Probably) Saves the World.”

This Article is related to: Television and tagged Kevin (Probably) Saves the World, Michele Fazekas, Podcasts, Tara Butters, Turn It On