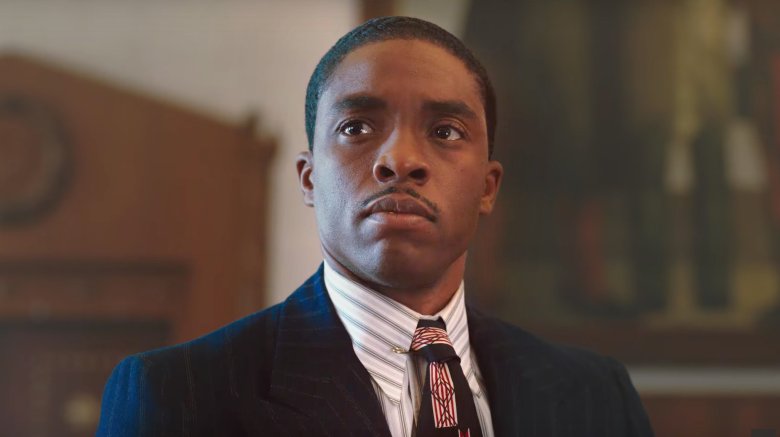 There are two very different explanations for why “Marshall” — ostensibly a biopic about Thurgood Marshall, the first African-American Supreme Court Justice of the United States — isn’t really about Thurgood Marshall so much as it’s about a shaky Jewish lawyer who Marshall once coached through a case. The first (and more generous) of the explanations is that the world could use an inspiring film about different kinds of discriminated against Americans joining forces to fight the prejudice that betrays the promise of the nation they share. The second (and more sincere) of the explanations is that Hollywood still believes that white audiences need an entry point to stories about people who don’t look like them, a Virgil to take them by the hand and guide them — safely and without implication — down through an inferno of intolerance and then out the other side.

The two rationales behind telling this story in this way don’t have to be mutually exclusive, but “Marshall,” for all of its good intentions, is such a missed opportunity because it uses the second explanation to invalidate the first. And yet, the problem with this hokey courtroom drama isn’t that it says the right thing in the wrong way, the problem is that it ultimately doesn’t say anything at all.

Or maybe the problem with the film is that it should have been a TV show. Set in 1940, almost three decades before Thurgood Marshall would be appointed to the highest bench in the land, “Marshall” introduces us to its namesake just as he’s starting his tenure as the legal director of the NAACP. The young attorney rode the rails for the next 21 years, crisscrossing the country in order to defend black Americans who had been falsely accused of terrible crimes. “Here comes the lawyer” people would say, and everyone knew who they meant. The series writes itself: Every cold open ends with a cadaver, Marshall (“Black Panther” star Chadwick Boseman) pulls in to town right after the first commercial break, and he eventually wins the case in time to chug off into the sunset.

This very special episode, co-written by former attorney Michael Koskoff and his son Jake, focuses on one of Marshall’s rare trips to New England, a place where people — both then and now — like to pretend is figuratively and geographically above racism. It’s also a place where Marshall isn’t licensed to practice law. Rather than grant him that power with a quick slam of the gavel, Judge Colin Foster (the honorable James Cromwell) decides to punish him for his perceived impropriety; rather than allow Marshall to passionately defend the black chauffeur accused of raping his white employer, Judge Foster forces Marshall to sit in the courtroom as a silent co-counsel for Sam Friedman (Josh Gad), a skittish white insurance lawyer who’s way out of his depth. And so begins the story of how one of the most impressive black men in American history coached some random Jewish guy into being halfway decent at his job.

The most striking thing about “Marshall,” a film that’s very short on striking things, is that it annihilates the textbook image of its title character. This ain’t your grade school’s Thurgood Marshall. A far cry from that titan who seemed cloaked in power even when he was out of his robes, from that jowly old man whose resting frown said more about injustice than most people could by moving their mouths, this Thurgood Marshall is all swagger. The clear-eyed and immensely charismatic Boseman plays Marshall as a 32-year-old lion who pals around with the likes of Langston Hughes and Zora Neale Hurston when he’s not busy dragging America out of its dark past; forget Black Panther, he’s Tony Stark with a better heart, on the cusp of a greatness that he can only achieve if sufficiently challenged.

That’s a great place to start, but the Koskoffs’ script is all too happy to leave him there, relegating him to the background while Sam Friedman takes the spotlight. A soft and sweaty Josh Gad type, Friedman is a Russian-American Jew who’s just trying to keep his head down and be subsumed by white society. Marshall couldn’t possibly ask for a more obvious foil: One fights for justice, the other is paid to wiggle through its loopholes. “Boomerang” director Reginald Hudlin is very simpatico with Gad’s comic sensibilities, but the film has trouble mustering an idea of what anti-semitism looked like in Bridgeport, CT during World War II; only after Marshall and Friedman drive to Greenwich and visit the scene of the crime does it feel like these two men — a superhero and his sidekick — have spent their lives fighting a similar foe. It helps that the aryan prosecutor they’re up against (Dan Stevens, channeling Ralph Fiennes circa “Schindler’s List”) clearly looks at blacks and Jews as different parts of the same stain, but his cartoonish hatred isn’t enough to explain why this case has been privileged over any of the ones that Marshall actually got to argue himself.

And this movie really needed to dig a lot deeper into the nuances of Marshall and Friedman’s relationship, because the courtroom scenes are rough. Shot with the mustiness of a History Channel re-enactment and chopped into moments that have all the subtlety of those instructional videos you have to watch at jury duty, the trial bits fail to convey the stakes of this case, either for the defendant (a quivering Sterling K. Brown) or for the millions of black Americans whose lives are unduly shaped by such headline-grabbing cases.

Epiphanies come to these characters in the clumsiest of ways, and chintzy flashbacks to the night of do a poor job of distracting from the fact that the outcome of the case is never in doubt. As clever as it is to focus on a largely forgotten trial, it’s clear from the opening credits that this is not the kind of movie that’s going to end with Josh Gad sitting in a dark corner with blood on his hands — Josh Gad doesn’t really make that kind of movie.

America is a grim place, with a more checkered past than that of any of the black men who are accused of making it grimmer (Brown’s character is “no angel”), but hatred is a lot more banal than the love required to move past it. It’s not enough to simply observe that it happens, and that it’s wrong; at this point, it’s hardly even entertaining. If you’re going to make a movie about the seemingly natural kinship between America’s black and Jewish populations, then trace the overlap in their experiences, and explore the details of their differences. There’s drama there, lots of it, rich enough for even Josh Gad to emerge with something valuable. And if you’re going to make a movie about Thurgood Marshall, then make a movie about Thurgood Marshall.