Haleyi, who worked as a Weinstein Company production assistant, has accused the studio mogul of performing forced oral sex on her. 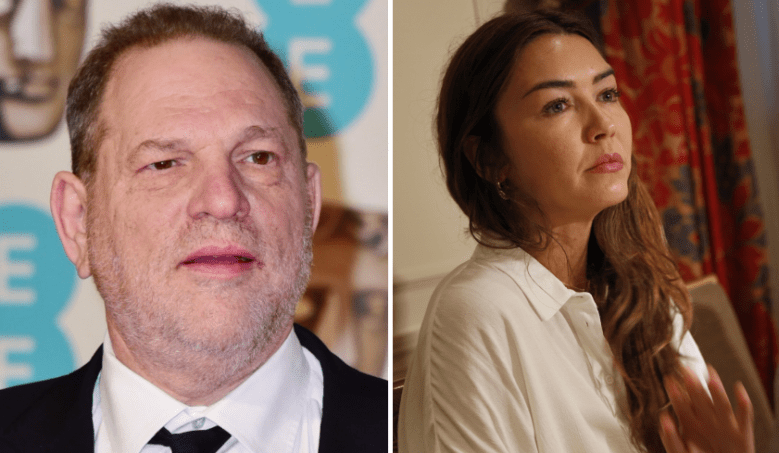 Mimi Haleyi, a former production assistant who worked on an unnamed Weinstein Company production, has accused Harvey Weinstein of rape. The woman joined attorney Gloria Allred at a New York City press conference on Tuesday, October 24 and revealed she had multiple interactions with Weinstein over the years. One meeting at Weinstein’s SoHo apartment allegedly ended with Weinstein performing forced oral sex on her while she was on her period. The assault reportedly happened in 2006, when Haleyi was in her twenties.

According to Haleyi, she first met Weinstein at the London premiere of “The Aviator” in 2004. Two years later, she ran into the studio mogul again at the Cannes Film Festival, where she asked Weinstein if there were any productions she could help assist on. She says he told her, “Why don’t you come and see me at my hotel and we’ll talk about it?” Haleyi went to Weinstein’s Cannes hotel room, where he allegedly asked for a massage multiple times.

“He kept asking about massages, and so I felt the meeting was going nowhere, and I left,” she said.

Weinstein later got back in touch with Haleyi and offered to have her work on one of his television sets in New York City. She did not disclose which set it was, but she said that when she met Weinstein after the production he was a “complete gentlemen and completely charming.” During a later meeting at The Weinstein Company’s Tribeca offices, Weinstein invited to fly Haleyi to Paris, but she declined because the invitation felt of a “romantic nature.” She says one night he even showed up to her East Village apartment and “forced” himself in and again invited her to Paris.

The alleged sexual assault occurred after Weinstein returned from Paris. Haleyi says Weinstein invited her over to his SoHo apartment and she agreed in order to “maintain a relationship.” When she arrived, she says Weinstein was “all over me making sexual advances,” to which she continuously objected. Haleyi informed Weinstein that she was on her period and therefore there was “no way” anything sexual was going to happen,

“He wouldn’t take no for an answer and backed me into a room which was not lit, but looked like a kid’s bedroom with drawings on the walls,” she said. “He held me down on the bed, I tried to get him off of me but it was impossible. He was extremely persistent and physically overpowering.He then orally forced himself on me while I was on my period. He even pulled my tampon out. I was in disbelief. I would not have wanted anyone to do that with me even if the person had been a romantic partner.”

“I remember Harvey after rolling onto his back afterwards saying, ‘Don’t you think we are so much closer to each other now?’ To which I replied, ‘No,'” she said.

Haleyi no longer works in the film industry. She joins over 50 women who have come out with sexual harassment and assault allegations against Weinstein. Actresses Rose McGowan and Asia Argento have also accused Weinstein of rape.

This Article is related to: Film and tagged Harvey Weinstein, Mimi Haleyi