Soderbergh previewed the new HBO app and explain how this new form is the closest TV has come to replicating the novel. 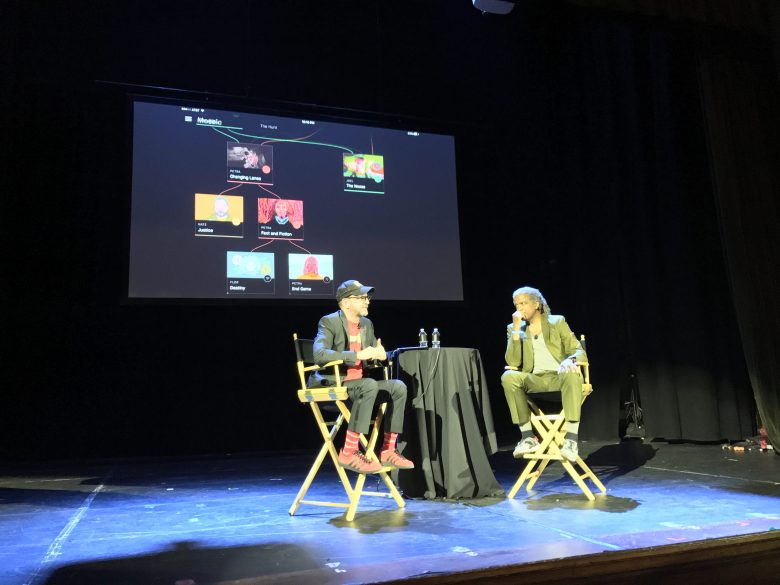 Steven Soderbergh unveils “Mosaic” at the Future of Storytelling

Today at a Future of Storytelling event in Staten Island, New York, director Steven Soderbergh unveiled “Mosaic,” his new 7-hour interactive, branching narrative that he has been working on for three years. The 7-hour interactive version will be available the first week of November via the “Mosaic” App.  A six one-hour traditional limit series version of the show will be available on HBO Go and Now in January.

In the hour-long talk with film critic Elvis Mitchell, Soderbergh previewed how audiences will experience and interact with the narrative and his process for creating a form he believes will bring audiences a viewing experience that is similar to reading a novel. Here’s what we learned. Projecting off his iPad, Soderbergh demonstrated how viewers will interact with the story on their mobile or OTT streaming device. The story is split up into 14 “nodes,” which are similar to episodes. On the main page is the story map in which you can see the various paths the narrative can take through the different nodes. Click one of the nodes and you start watching it, much like you would like any other episode of television.

At the end of the node, you are presented with two choices of which node you want to watch next – a choice Soderbergh indicated viewers are intended to make based on which character they are most interested in following.

Inside most of the nodes are “discoveries” – these are the equivalent of a scene that supplies a key piece of backstory, character reveal, or other insight. When you come across a discovery, a small screen appears that you can click on if you chose to watch the cut-away scene. After you are done watching the discovery, you are returned to where you left off in the node. “Mosaic” is a murder mystery, and Sharon Stone’s character is at the center of the narrative from which different story branches flow. As a starting point, Soderbergh and writer Ed Solomon wanted to explore how people’s lives are consumed by the narrative they construct of themselves.

“The whole piece to me was ultimately about the forces that are unleashed when somebody’s dream is killed off and how you can’t always predict where that energy, or that reaction is going to go when someone’s entire identity gets destroyed and their whole idea of themselves gets destroyed in a way that’s brutal,” said Soderbergh, in his discussion with Mitchell, who had watched all 7-hours prior to the talk. “People react to that differently – some implode, some explode.”

“[Sharon’s character] is a variation of that because she had one great thing happen to her awhile ago and she’s never been able to recreate it,” said Soderbergh. “Then you have Garrett Hedlund, whose character is sort of at the beginning of building his identity and it’s about what happens when the two forces collide and one person sort of gets destroyed.” Sharon Stone is at the center of the story in “Mosaic”

Two-thirds of the way through production, there was a two to three month hiatus, in which actors put on weight, grew beards, or whatever physical transformation was needed for the last third of the story.

The scenes that were shown looked and felt like any other Soderbergh-shot TV or movie, though there was greater use of close-ups and more dialogue than would be expected.

How This Changes Soderbergh’s Approach to Narrative

Soderbergh indicated that he has always been more interested in character than story, and this new format allowed him to focus more on exploring character, rather than being forced to constantly figure out how to distill narrative.

The key to how Soderbergh thought of the story was in considering how events could be experienced through different characters’ subjectivities. He shot and staged “Mosiac” as he would any other film or show, except that he would film most key scenes three times, through three different characters’ perspectives, all to be used in different nodes.

“What I hope is that the further you get into the story and the longer you spend with these character, the piece begins to have the feel of a novel, as opposed to a TV show,” said Soderbergh. “That the multiple perspectives fills in a landscape that is just more detailed than what you have in a normal viewing experience. That’s my hope, that’s what we were going for, that by the time you reach the end of the path with one of these characters [you] feel inside of them [which is] different [than other viewing experiences].”

Soderbergh went out of his way to praise HBO, specifically CEO Richard Plepler, who backed the project years ago and gave the time, money, and resources to develop not only the story, but the technology to build the “Mosaic” app. “[Producer] Casey Silver and I went into [Plepler’s] office with a prototype, sort of a 15 minute version – different story, different actors, something we shot – to show him what it was,” said Soderbergh.

He continued, “It was one of those meetings you don’t have very often in your life. Essentially, he and Michael Lombardo stood in front of the door and said, ‘you guys aren’t leaving until we have a deal to do this.’ And they never looked back. They committed to something that at that point was just an idea, it was a prototype, we didn’t even have the story figured out yet and he said, ‘let’s go.’ Not a lot of people would do that, considering the time and resources that were going to be involved.”

Figuring out how to structure “Mosaic” was clearly the most difficult part of the process for Soderbergh and Solomon, who started with a 700-page script. At one point, they experimented with having 45 different nodes, before realizing longer and less nodes was the way to go.

Yet even once Soderbergh shot and edited the 14 nodes, the story as a whole was not working. In the year-long editing process, the duo tried a number of different story maps and ways to structure the narrative, but through testing – both with trusted colleagues and HBO’s normal testing process – viewers reported back that they weren’t getting involved in the story until the end. Soderbergh admitted he was panicked.

“It was terrifying at times how many editorial options you had potentially,” said Soderbergh. “But then if you cannot panic and you start to show it to people, it becomes a filtering process.”

The story originally started with Hedlund’s character in Louisiana, running his gator guide business, when he is asked to come to Utah to investigate the case. Soderbergh referred to it as his “cold open.” “[A cold open] was one of those things that in an abstract narrative sense sounded cool,” said Soderbergh. “But in actuality you didn’t know either of [the main characters] well enough to get hooked.”

Soderbergh then decided to start with the most dynamic character, Stone, and create the most compelling opening. “It just opened the whole thing up and you knew exactly where you were and the way the characters were introduced [was more] organic,” said Soderbergh. “And this all came in the last few weeks of editing.”

Soderbergh repeated that he believes in the interactive, branching narrative form and that in a few years “Mosaic” will feel like a cave painting, as he and Solomon were just trying to feel their way through how to do the first project. He is interested in doing another, but not until others first experiment and expand the form further. After the three-year process, he is convinced that the form can hold comedies and other types of stories.

He did indicate that “Mosaic” is intended to be open source for anyone to use and that he is developing two more branching narratives — ones that will be more complex than “Mosaic” — with other filmmakers. He did not indicate if HBO was attached to those projects.

This Article is related to: Television and tagged HBO, Mosiac, Steven Soderbergh