The Oscar winner gets characteristically candid about playing a role she'd long hoped to land, and the challenges of being a strong woman at any age. 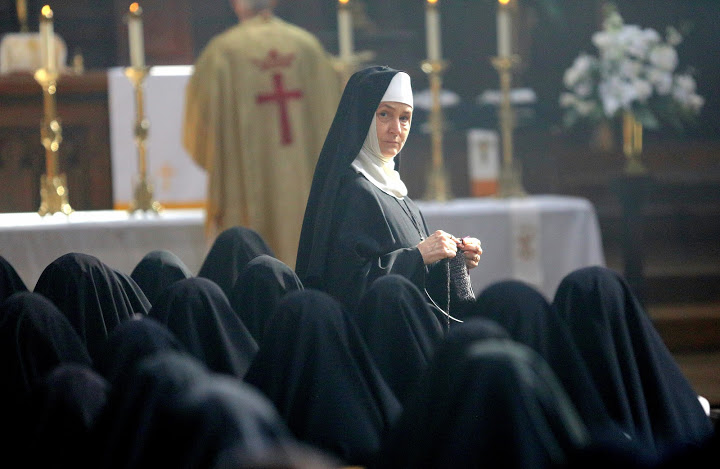 Melissa Leo doesn’t let go of her characters easily. Nearly a year after finishing production on Maggie Betts’ “Novitiate,” and the Oscar winner is still quick to slip back into the mindset and motivations of her Reverend Mother. As the head of a seemingly thriving convent, Leo is at her fearsome best, tasked with playing a woman who revels in her position, lording over the many young nuns (and those seeking to become nuns) with a steely reserve and a very sharp eye for discipline. A decade after she defied expectations and earned her first Oscar nomination for “Frozen River,” she delivers another powerful performance that could bring her to the podium again, this time in the supporting category.

But the Reverend Mother’s ability to wield absolute power is challenged during the course of Betts’ film, which is set in the mid-’60s, just before and after the implementation of the Vatican II rules which stripped nuns of many of the benefits and comforts they had long enjoyed. “Novitiate” first introduces a starry-eyed pack of young postulants, including Margaret Qualley and Liana Liberto, before focusing in on Reverend Mother and her own dramas.

“I know what it meant to me to play the Reverend Mother, a role I’ve, in some ways, prepared a lifetime to do,” Leo told IndieWire. “It’s why I took the part. I have a fascination with the commitment of those women.”

Leo said her interest in women of the cloth dates back to some of her earliest memories as a child, when she attended a Montessori pre-school that happened to be run out of a Catholic school. She still remembers those nuns, and she used that fascination to fuel her work. She would need it.

As Reverend Mother’s long-held identity is chipped away, she suffers mightily. When asked about the character’s ambition – one that seems obvious, given her clear delight in heading up the convent and her frustration when her duties are reduced – Leo balks. Ambition? That’s not in her Reverend Mother.

“Reverend Mother would argue with you,” Leo said with a laugh. “That’s putting her in this place that I do not see her in. Ambition. We don’t tell the [origin] story of Reverend Mother, we don’t know what that progression was. Ambition? Or wisdom? We don’t know. Why would we assume ambition?”

One reason why Leo doesn’t see that side of Reverend Mother: it’s not something she personally connects with, and Leo needs a personal connection to make a character stick. “I’m not a particularly ambitious actress,” Leo said. “I love to go and do my work, head down in the dirt and be the character. That’s not who I am, so that’s not who Reverend Mother is.” But that might be part of her genius. When Betts, who also wrote the film’s screenplay, was asked about the ambition question, she laughed. Of course Reverend Mother is ambitious, but that was never Leo’s takeaway.

While Betts took some liberties with the material and it’s not meant to be wholly historically accurate, Leo was taken with the “texture” of the film and the story it was telling.

The always-candid actress confessed that she didn’t even finish reading Betts’ script before she signed on, knowing on some deep level that the role was going to be a special one for her. Even now, these many months later, she’s still mulling over Reverend Mother and her motivations.

“I still don’t know, does she seem a bit sixes and sevens, does she have to be so mad just because she’s older? But conflict in filmmaking, differing ideas in the collaborative art of film, in fact, is what the art is about,” Leo said.

Betts spent years developing the script and relied on the input of her young actresses to fully develop their various characters, but the filmmaker had a different experience with Leo. For all Leo’s questions, Betts said she showed up more prepared than anyone. “She works hard, she does more than anybody I’ve ever seen,” Betts said. “She shows up with like 20 pages of notes, and wants [to go] line by line.”

More importantly, she knew Reverend Mother through and through. “Melissa is totally in the moment, but there’s also this other part of her that’s kind of almost leading you,” Betts said. “There’s a part of her that’s always two steps ahead of the line. She’s in such control about it. It’s really sort of mesmerizing to see.”

It’s fitting that Reverend Mother spirals when she’s not allowed to be in control, forced to abandon the lifestyle she’s always known, one that put her firmly in charge. Ambition? Nah, wisdom.

“I would have to imagine that to aspire to that high position within the Catholic church, she had to be wise, deeply wise, educated,” Leo said. “That kind of woman who is still in today’s world gets called a bitch because she’s had to get what she needs done.”

Leo also knows what it takes to get things done, and no one is more of an advocate for her work than her. While the actress isn’t hung up on the glitz and glamour of awards campaigning, she’s hungry for the recognition that comes along with it. As for the prospects of “Novitiate,” she confesses to being in a “wait and see” state, but her work in the film has been touted for an awards run since the film debuted at Sundance in January.

If nothing else, Leo knows how to make her commitment plain. In 2011, she memorably launched her own campaign for her work in “The Fighter,” including a glossy full-page shot in the trades that asked readers to “CONSIDER” Leo — but contained no mention of the David O. Russell film itself. It was brazen, unexpected – and it worked, earning Leo her first Oscar for Best Supporting Actress.

Talking about the awards game exhausts her, though, and when asked what had changed in her life after her Oscar win, she’s blunt. “Absolutely nothing,” Leo said. “It’s taken a long, slow climb to even imagine myself as a public person. This whole other thing that has happened in a very, very slow progression. It’s happened that way because it’s the only way that this girl could have handled it.”

Sign Up:Stay on top of the latest breaking film and TV news! Sign up for our Email Newsletters here.

This Article is related to: Awards and tagged Maggie Betts, Melissa Leo, Novitiate