The two-hour premiere also sets up a storyline abroad, which could be exactly what the show needs to revitalize its revolutionary spirit. 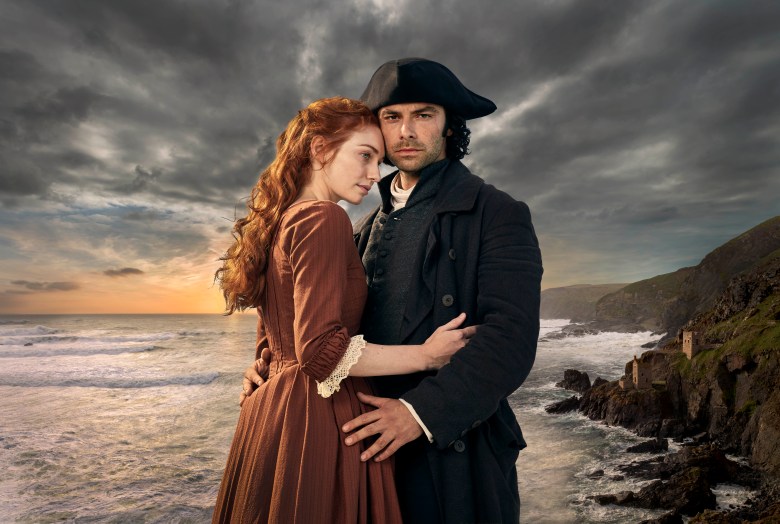 [Editor’s Note: The following contains spoilers from the Season 3 premiere of “Poldark.”]

For Season 3, “Poldark” had to pull itself out of the mire of bitterness and betrayal that plagued the end of last season, when the series’ hero tarnished his sterling character with infidelity. The central romance suffered as a result, and still stings in the hearts of both his faithful spouse and viewers.

And for the most part, it does appear that Ross Poldark (Aidan Turner) is keeping his word to his wife Demelza (Eleanor Tomlinson) this season, although a shadow cools their once sizzling-hot romance. The season begins several months since last season, enough time for his old flame and one-night affair Elizabeth (Heida Reed) to be ready to pop out a baby any second. And while the passage of time has allowed Ross and Demelza to reconnect, it has only allowed toxicity to bloom in Elizabeth. Not only is she still angry at Ross for bedding and then jilting her, but she’s also been harboring a fear that she’ll soon give birth — not to her newlywed husband George Warleggan’s (Jack Farthing) heir, but to a Poldark lovechild.

And thus, “Poldark” dips back into the same well as in seasons past, but with an extra dimension. The love triangle has become more of a love quadrangle, and the old rivalry between Ross and George has become even more personal than before — especially if the baby ends up becoming tangible evidence of cuckolding. At its heart, “Poldark” is partly a soap – a swashbuckling, Cornish soap – that embraces all of its intrigue, backstabbing, power plays, and affaire de coeur. To freshen the familiar ground that the series is treading, literally a new generation has been added to the mix. Elizabeth’s first son Geoffrey (Harry Marcus) has entered the Poldark-Warleggan tug-of-war by siding with his dear Uncle Ross. And on the romance front, Caroline (Gabriella Wilde) and Dwight Enys (Luke Norris), and Demelza’s brother Drake (Harry Richardson) and Elizabeth’s cousin Morwenna (Ellise Chappell), promise opportunities for fluttering pulses, wistful sighs, and whatever level of bodice-ripping that the BBC and PBS will allow.

Echoing these heightened emotions are the equally violent waves crashing on the cliffs and the winds whipping everyone’s hair into a frenzy. There is a wild lawlessness to “Poldark’s” Cornish setting, and nature plays an essential part in reflecting that, while looking gorgeous to boot. In particular, the premiere presents the idea of the dark moon, a.k.a. a blood moon or total lunar eclipse, as a dark portent of evil to come. The events of that night – the death of Demelza’s father, newlyweds Caroline and Dwight’s premature separation, and the painful delivery of a child who could exacerbate the feud – are only the beginning of the travails ahead.

The other side of “Poldark” is revolution — upending societal mores and challenging the restrictions of class. The late 18th century is a time of upheaval and change, and those are the conditions in which Ross attempts to keep his people’s bellies full and to make his copper mines prosper. He’s a gentleman who married a scullery maid, who relishes physical labor, and keeps company with smugglers. His actions are generous and unselfconscious, which are constant affronts to George, one of the nouveau riche who cares greatly about his social standing. What better setting is there for Ross then, than the French Revolutionary War? The end of the episode sets him up for a perilous adventure abroad, something he’d been wanting to do for a long time. Although he’s traveling to save his friend Dwight, no doubt the topics of liberté, égalité, fraternité will arise with his proximity to France.

And perhaps this is actually what Ross needs. He’s a product of his time, and after he went off to war, he came back a changed man. Throwing himself into work and a romance worked for a bit, but maybe there’s a reason that he’s drawn to ill-advised dealings with his ex and his arch-enemy. For Demelza’s sake, let’s hope this helps his restless soul. Sending Ross essentially into war again might be exactly what he and the show needed.

“Poldark” airs as part of “Masterpiece” on Sundays at 9 p.m. ET on PBS.

This Article is related to: Television and tagged Masterpiece, PBS, Poldark, TV Reviews