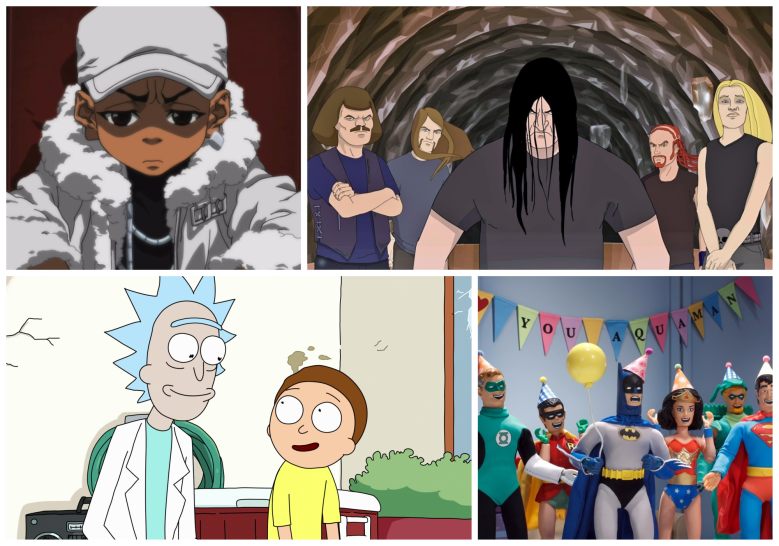 There are few communities as obsessive as Adult Swim fans. The Cartoon Network nighttime programming block debuted in 2001 as a subversive spin on the animated channel’s daytime fare, and soon grew into a catch-all for bold creators. It eventually shook off its animated-only ethos to allow for surreal visions and adventurous filmmaking that fostered some of Hollywood’s most off-the-wall thinkers, and even brought in game celebrities to join in the insanity. Nearly every AS title has disparate cults to fight for the programs that speak to them, whether it’s the rockers who ride for “Metalocalypse,” the Tim & Eric faithful who crowd the duo’s live shows, or the chemically enhanced who get their kicks on “Off the Air.”

Here are our picks for the network’s top 20 original comedy series, taking cultural influence into account alongside laughs.

Seth Green and Matthew Senreich’s long-running stop-motion sketch series splits the difference between two massively popular types of modern comedy: ’80s nostalgia and YouTube-length fits and spurts. By recalling endless fandoms (“Star Wars,” “Transformers,” “Star Trek,” etc.), there’s always a compilation to be found highlighting the best moments for every geek subculture. While individual episodes have a hit-or-miss ratio level with the cutscenes in an average “Family Guy” episode, this fond reimagining of childhood moves quick enough to not wear out its welcome.

A high-concept stop-motion masterpiece from Dino Stamatopoulos, this short series was as gorgeous and intricately detailed as its premise allowed. An immortal Dr. Victor Frankenstein is able to travel through time, leading to some lovingly bizarre historical mashups between a universe teeming with monsters, and guests such as Mahatma Gandhi, Ron Howard, and Thomas Jefferson. Casual fans might get whiplash from the whip-smart humor and faux-science mumbo-jumbo, but there’s plenty to love in this underseen wonder.

The protagonist of Hanna-Barbera cartoon “Birdman and the Galaxy Trio,” relocated to a courtroom: Not the most intuitive move, but Harvey T. Birdman is one hell of a defense attorney. Fred Flintstone, Yogi Bear, and Captain Caveman are just a few of his old friends seeking justice, and it’s a treat to see these characters get wrapped into modern troubles. With a voice cast anchored by Gary Cole and Stephen Colbert, this is a warm, gentle parody buzzing with nostalgia.

Jon Glaser’s onscreen persona is perfectly crafted in this clever mockumentary series. Hoping to hide from the Russian mobsters he testified against, “Jon” agrees to sign on for a reality show with his family as long as he can wear a protective ski mask and modulate his voice. It’s a ridiculous premise with an equally silly execution’ Eugene Mirman’s mob hitman has as tough a time hitting his mark as “Jon” has laying low. It’s a live-action cartoon in the best way possible.

This Article is related to: Television and tagged Adult Swim, Rick and Morty