From "The Leftovers" to "Parenthood," critics reveal the TV shows that are the best tearjerkers. 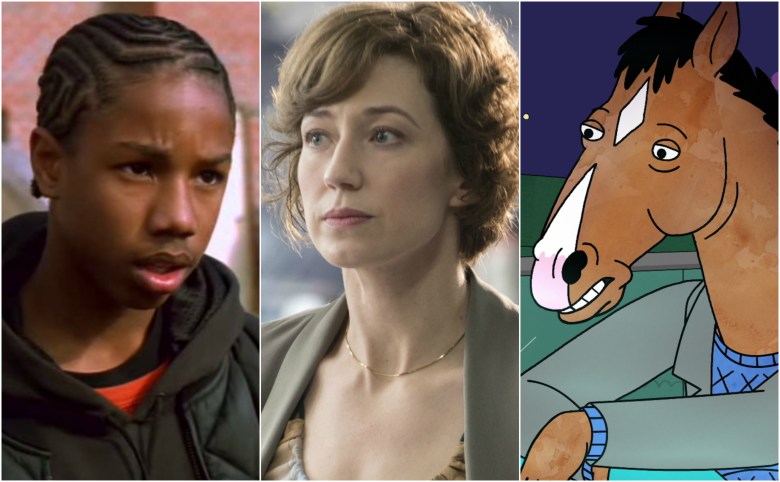 “The Wire,” “The Leftovers,” “BoJack Horseman”

This week’s question: What is the saddest show? Which show makes you cry the most? (Old and current shows are all fair game.)

I just wrote something on this very topic! And I think these are two different questions. Which show makes me cry the most? In the balance across its entire series run? I think the answer has to be “Friday Night Lights.” I’m a sucker for underdog sports stories in general, but “Friday Night Lights” could make me cry in so many different ways, from what happens to Jason Street in the pilot to what Matt Saracen goes through in “The Son” to the half-dozen times a victory on the field or a thrilling pep talk made me bawl. But I don’t think “Friday Night Lights” is a sad show. In fact, in the balance, it’s a celebratory show in which life’s sadder moments sometimes make appearances, as they do in life.

So what do I want to highlight? Well, this past weekend’s episode of “Halt and Catch Fire” was one of the great “sad” episodes of television I’ve ever seen, and the past couple episodes have been a spectacular treatment of tragedy and grief from a show that is often sad, but probably doesn’t want to be thought of as sad. I doubt “The Leftovers” wants to be thought of as sad either. Probably quite the opposite. It’s a series about loss and regret, but it’s just as much as series about figuring out how you can move forward. “Better Call Saul” didn’t start out as a tragedy, but it has become one and a great one at that. Various David Simon shows about how institutions crush people under their corrupt, failing weight probably don’t want to be thought of as “sad” either, but they definitely are. “Six Feet Under” was a show about death, but I don’t know if I’d call it a “sad” show. “Buffy” had several wonderful sad episodes, but was not a “sad” show. “Mad Men” used “sad” as part of its tapestry, but it was never a “sad” show, really. In conclusion, good shows use sadness as another color in their palette, but they’re rarely truly sad. Bad shows are sad. So, once again, my answer is: The CW’s “H8r.”

Everyone else in this poll is playing for second place. Even anyone who picks relentless tear jerking machine “Friday Night Lights.” #WheresWallace

Nearly every episode of “The Handmaid’s Tale” made me sob, to be honest — emotionally, it really knew how to kick me in the gut. But when I think about TV that really broke me (that I also don’t think anyone else will mention), I think about the “How I Met Your Mother” episode “Symphony of Illumination,” a.k.a. “the one where Robin learns she can’t have biological children.” Beyond that reveal, there are a number of twists to the episode that are real gut-punches, especially the image of Robin’s hypothetical children vanishing…and then you get that final moment of kindness from a clueless Ted, accompanied by the voiceover “…the one thing your Aunt Robin never was, was alone.” It’s a moment I’ll never forget, one that still brings tears to my eyes. Damn, this show had its moments.

I will always say that the first season of “The Leftovers” was marrow-deep grief in episodic form. The experience of watching that story unfold, soaked in loss and confusion and pain, was not something I a) expected or b) particularly enjoyed, to be honest. Yes, the performances were stellar and the tone was so unique, but an hour of Justin Theroux’s Kevin trying to piece his family back together while daughter Jill wandered around in a haze of anomie and everyone else is crying…good god. This is why I like shows with superheroes and housewives. They may be dark, violent and, in the case of the housewives, incredibly dumb, but at least I don’t need to worry about having to bawl into a pillow and ruminate on the void that is human existence afterward. Not only do I not cry, but I don’t believe in the concept of sadness at all. It is a weakness I have transcended to become an emotional perpetual motion machine. All I feel is the numb sameness of reality’s crushing weight, day after day after day, and this is Good. I am Happy.

j/k sadness is good, crying is fine, and no show has ever hit me like “Everwood,” a perfectly cheesy maelstrom of fathers and sons trying to overcome their differences, small town folks arguing about important things, and emotions going wild. “Everwood” now, “Everwood” forever.

The late and great “Rectify” was a pretty darned sad show and reveled in it. One only needed to look into Aden Young’s eyes to see sadness personified; I don’t think that role could have been cast any better if the point was to hollow out your soul. Add in themes of a broken justice system and intolerance and you got yourself a real eye-wringer there. Starz’s “The Missing” also required a bib to watch as it not only featured a story of a missing child (not much sadder than that), but also repeatedly squashed the hope of finding him alive. But the real sadness came from the never-ending struggle of one parent who couldn’t accept his son was dead and did anything he could to keep that hope alive. Sad! “BoJack Horseman.” If you told me four years ago I’d say that about a cartoon series about a horse, I would’ve laughed in your face, but its layered rumination on depression is unexpectedly poignant, weird and cathartic. I, however, have never cried watching it. That’s because I am a robot and rarely ever cry watching TV. The only time I did was when Dr. Greene died on “ER” on May 9, 2002. When I hear the opening strands of Israel Kamakawiwo’ole’s “Over the Rainbow” these days, my eyes may well up, but I keep it together. The only other times I’ve shed a tear while consuming media was when Mufasa died during “The Lion King” and when Susan Sarandon tells Julia Roberts, “I have their past and you can have their future,” in “Stepmom.” Yes, I was disappointed this wasn’t the line Julia recreated with James Corden.

This is hard because about 95 percent of television makes me cry even when it’s not supposed to! “The Leftovers,” I think, is certainly the saddest show I’ve watched in recent history — no surprise there as it’s also the most accurate exploration of grief that I’ve ever seen. “Parenthood” made me cry no less than 10 times each season (as a general rule: When Mae Whitman cries, I cry too), so much so that I don’t think I can ever rewatch it despite how much I want to. But if I’m being totally honest, “You’re The Worst” is the series that makes me cry the most — even when the episodes themselves aren’t as sad. There is just something about the existence of “You’re The Worst” that constantly throws my emotions into a tailspin even when I can’t stop laughing. I basically sobbed through the most of Season 2, and especially so the second half that went all-in on Gretchen’s depression. Ditto the third season (“Twenty-Two” resulted in me hiding in a work bathroom stall to cry for about 15 minutes) and I’m currently crying my way through the fourth. The entire Season 3 of “Downton Abbey,” all of HBO’s “Six Feet Under,” the final season of Showtime’s “Dexter,” Dr. Thackery’s death on Cinemax’s “The Knick” (plus the knowledge of the fact the series would not be back), and NBC’s Season 6 of “Scrubs” (“My Long Goodbye”) when Carla says goodbye to Laverne, Niagara Falls! The finale of “M*A*S*H*” that aired before you were born most likely when Pierce and Hunnicutt bid adieu to each other was a major tear fest too.

But the answer for me to the question is Vince Gilligan’s “Breaking Bad,” the Felina finale where the sadness was amplified by the cumulative results of all of the bad decisions a well-meaning but misguided Chemistry teacher inflicted on his family, and how they all suffered. Gutting and profoundly well-done TV drama.

Even before this question was officially sent my way, friends and colleagues were already cracking jokes about which “Leftovers” story I’d share. Admittedly, Damon Lindelof and Tom Perrotta’s exploration of grief left me in tears more consistently than any other series out there — and I ascribe to the Swanson Method on crying — but each episode was also far more invigorating than dismal (as evidenced by the word count for those reviews). “The Leftovers” celebrated the purpose of life far more than it wallowed in mourning its end, so my pick for this poll is “Mad Men.”

What strikes me about Matthew Weiner’s former AMC series isn’t so much the weekly balance between pain and joy; the show was capable of being as funny as TV’s best comedies, and often was. It’s the long-term arcs: It’s Don Draper’s eternal quest for inner peace in a world telling him to find it anywhere else; it’s Peggy Olson fighting her way to middle management and losing everything else along the way; it’s that even when they find happiness in the series finale, viewers’ first instinct was to question the legitimacy — the permanence — of those discoveries. If “The Leftovers” was a meditation on grief, “Mad Men” was a meditation on existentialism, often verging into nihilism.

When Don wasn’t satisfied with the meaning he’d assigned to his life, he hit the sauce, looked for a new lady, or lost himself in work. These are the things we all do in reaction to dissatisfaction, and facing that over and over again for seven seasons is the saddest thing I can think of without losing the value of sorrow entirely. “Mad Men” was worth the many tears it produced because viewers could be the change they didn’t see on screen. That, or they could empathize with an Old Fashioned. Either way, the sorrow evoked a thoughtful response, even if you didn’t come back up from it any time soon.

Other contenders: “Better Things” (two votes), “Black-ish,” “The Deuce,” “Nathan for You,” “Outlander” (one vote each)

This Article is related to: Television and tagged Friday Night Lights, The Handmaid's Tale, The Leftovers, You're the Worst