It's why "I Love You, America," the comedian's new Hulu show, is focused on plenty of other things instead. 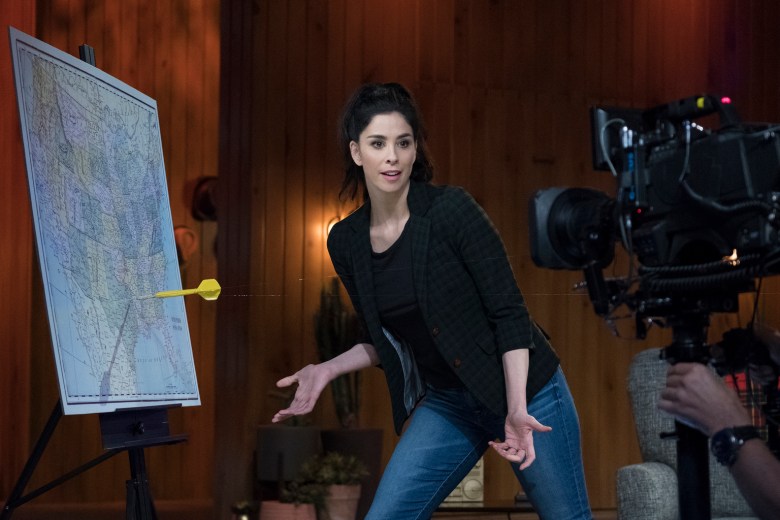 “I Love You, America”

TV hosts get welcomed into people’s living rooms on a regular basis. With “I Love You, America,” Sarah Silverman is making that a two-way invitation. The set of Hulu’s new show features a plaid-draped couch, Abe Lincoln tchotchkes, and roadside diner signs, all capped off by a pull-down Murphy bed.

As always, Silverman is using her personal comedic approach to challenge what certain audiences find acceptable, but particularly in this new venture, she wants people to feel comfortable first.

“This is really everything I dreamed it could be. It doesn’t mean it’s gonna be even anyone else’s cup of tea, but it really is mine. I wanted it to be of this moment in time,” Silverman said in a recent interview with IndieWire.

In its opening episodes, Silverman’s format-fluid interview/commentary/documentary project has ventured out from some familiar coastal climes to different places across the country. Now a couple of weeks into the process of shepherding the show onto the air, Silverman’s found a few surprises of her own along the way.

She doesn’t see “I Love You, America” as a great comedic corrective, but the show’s continual emphasis on conversation has really framed these discussions in a different way. Whether it’s a chat with her father, a dinner date with a Louisiana family or a sit-down with activist DeRay McKesson, there’s a specific approach to how she’s been quick to include plenty of opinions besides her own.

“I’m not saying this show is about changing people’s minds, but making another show that has facts and figures isn’t necessarily what I’m interested in. And I don’t think it’s effective, sadly,” Silverman said. “I think it’s because we don’t know what the truth is. If we don’t have the same truths that we’re basing this argument on then the argument is moot. If somebody’s definition of liberal or of feminism or of social justice is so different from mine, then we can’t have a conversation about those things.”

The unspoken (or spoken, in a number of cases) lens through which many of these episodes are viewed is the current presidential administration. Silverman and the “I Love You, America” writing staff didn’t set out to make a Trump-free show, but she’s cognizant of how he looms over much of the political comedy that’s currently airing on TV.

“To make a show that’s of this moment in time, that’s of America right now, you’d be surprised at how little we need to talk about Trump in order to really be talking about it. When we talk about the sign of these times, he’s kind of the figurehead of it, and the face of it,” Silverman said.

“He’s just the festering whitehead that is the product of this bed that we’ve made as a country. He’s a fucking colossal, giant, dangerous, baby. I’m not making it a point to not mention him but he’s really not coming up because I think that in history — and I could be very wrong — when we look back on this, we’ll be surprised at how his presence in all of this is not quite as relevant as we think.” “I Love You, America”

In Silverman’s eyes, presenting alternate perspectives from across the country doesn’t go hand in hand with infallibility. In the opening monologue for her second episode, Silverman admitted to not knowing anything about the Obama administration’s deportation practices until recently.

“I’m trying to be brave enough to learn out loud. I mean, I used the world ‘oligarch’ but I had to look it up before I did and understand what it is. When I heard Bernie [Sanders] using it, I was like, ‘What’s this?’ It’s OK to not know stuff. You just have to be willing to then know stuff and let that change you if it so should.”

“I Love You, America” is dealing with big ideas (like the nature of truth) and big issues (like the rise of hate groups in public life), but there’s a concerted effort on Silverman’s part to inject some positivity into the process as well. At the taping of the premiere episode, right before cameras rolled, you could hear her shouting, “Have fun everybody!”

“I do like to just yell that out, or yell things out. ‘We’re on a planet in outer space!’ or like ‘Nothing matters!’ The head writer, David Ferguson, will sometimes just come backstage right before and just go, ‘Remember joy?’ And I’m like, ‘Oh yeah, I love joy,’” Silverman said. “You ever not listen to music for a really long time and then you do and you go, ‘Oh my God, I completely forgot about music and how it makes me feel happy. It makes me feel things!’ Sometimes you have to remember that shit.”

As far as the rest of the season, Silverman did explain that the show has plans for an episode timed for the anniversary of the 2016 election. But the week-to-week guests hold a better key to what the clearest “I Love You, America” throughline might be. In addition to past guests McKesson and former Westboro Baptist Church member Megan Phelps-Roper, Silverman explained that future planned guests include writer Roxane Gay and singer-songwriter Mary Gauthier.

“It’s people who have been changed or motivated in new ways in their lives. And that’s interesting to me. It’s not really an interview show, so we’re not promoting shit. We’ve all been changed, so anyone could fall into that,” Silverman said. “We tried to get Dennis Miller, who to me is someone, just watching from a distance, where it seemed like 9/11 was a huge changing point for him in a different trajectory than my average guest. But we got a hard ‘no’ from him. And I understand. It’s hard. I’m trying to be very open, but I tend to be more inspired by other people who are very open and you don’t see that kind of openness and willingness to be changed with new information on the right.

“I’m probably talking from my liberal bubble right now, and maybe someone can enlighten me about that,” she added.

The “I Love You, America” set is dotted with not just one, but two copies of a photo of Mel Brooks and Carl Reiner in a loving hug. While those icons might guide the comedy of the show, there’s another TV icon with a famous living room that’s guiding what this show might become going forward.

“The thing that keeps coming up over and over again is, Mr. Rogers: ‘If it’s mentionable, it’s manageable.’ So I try to lean on that as much as possible,” Silverman said.

New episodes of “I Love You, America” are available Thursdays on Hulu.

This Article is related to: Television and tagged Hulu, I Love You America, Sarah Silverman