Rosie O'Donnell and Connie Britton co-star in a Showtime series as tender and hard as only a great mom can be. 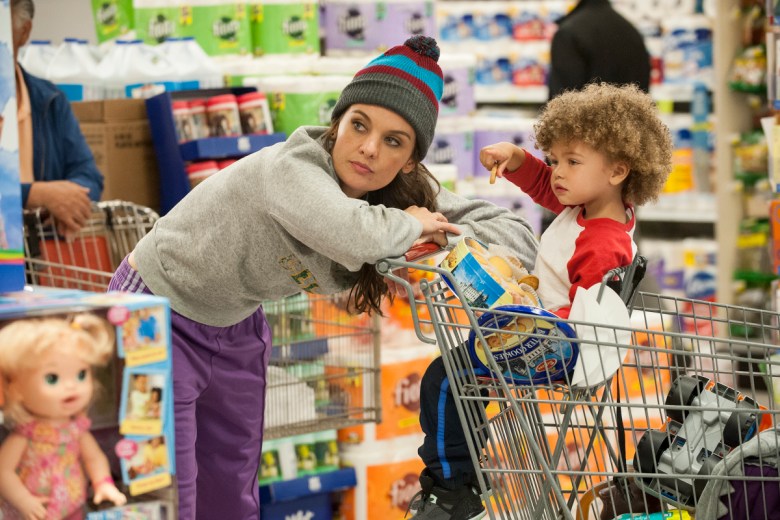 Shaw stars as Bridgette, a Bostonian living in Southie who works as a part-time tutor, part-time actress, and part-time overeater. (Bridgette binge eats on occasion.) She’s a single mom who always, always, always needs to be available for her son, Larry Bird (played by sisters Alexandra Mary Reimer and Anna Chanel Reimer and named after the Boston Celtics legend). Though she harbors dreams of becoming a basketball star, Bridgette splits her time between her son and making ends meet — the demands of a demanding life, not the dream life.

Helping Bridgette are her mother, Tutu, played by Rosie O’Donnell, who does as much as she’s emotionally capable of; her overly friendly (but still exploitative) boss, Ally (Connie Britton), and Rafi (Miguel Gomez), Larry’s father and Bridgette’s ex, who’s present but less than the desired amount. The relationship between Bridgette and Rafi is one of the series’ strongest elements, as their divergent backgrounds introduce fundamental differences in parenting styles. He’s devout, while she has a skeptical attitude toward organized religion. He’s a bit of conspiracy theorist when it comes to the government (including vaccinations), and her education makes such claims frustrating to hear, let alone respect. But they love their child, and they love each other — the latter point being particularly important.

Through three episodes, we don’t know a detailed history of their relationship, but it’s clear they’ve both moved on; there’s no lingering romantic feelings, no stolen glances, or implied jealousy of new partners. Sure, Bridgette may not love that Rafi is dating a freaking bombshell, but her instinctual disdain for Nelson (Samara Weaving) isn’t based on wanting to get back with Rafi. It’s that Nelson represents the possibilities still open to Rafi that seem so far removed from Bridgette.

For as much as Rafi is there for Larry, Bridgette is always there. It’s a point stressed by the series: the time commitment and its restrictions. Bridgette can’t go out on dates whenever she feels like it because of Larry. She can’t go out, period, because her job doesn’t afford her such luxuries. She can’t get a better job because she has to have a flexible schedule and, even then, work close to home. How these topics are brought out by the mother/father dynamic make for human, moving, and original stories. Compare “SMILF” to TV’s other (excellent) single mom series, Pamela Adlon’s “Better Things,” and the shared custody, setting, and class difference stand out in Shaw’s show. (She writes, directs, produces, and serves as the showrunner on “SMILF.”) Bridgette isn’t living paycheck-to-paycheck; she’s living without paychecks, or at least enough of them. She’s already fighting for every second of her time off, and the series doesn’t shy away from the persistent, daunting reality of that fight.

Both shows also have prominent mother (or grandmother) figures. “Better Things” has thrived when digging into Phyllis (Celia Imrie), and the early glimpses into Tutu’s life hold similar potential. She’s on call for babysitting duties, but isn’t the most attentive caretaker. She can be loving, sweet, and protective, but at times she can just shut down. It seems like Tutu is battling depression, but what exactly is going on with her is a topic to look forward to exploring in future episodes (especially since O’Donnell conveys an astute understanding of the character so early on).

With so many rich characters, engaging conversations, and refreshing themes, it’s vexing to see “SMILF” get hamstrung by unnecessarily showy scenes. Episodes 2 and 3 both feature small arcs dealing with uncomfortable sexual situations. The first feels like a bookmark the size of a bowling ball: as if the writers are introducing a lurid plot point only to guarantee a problem later on. The second is a tense, telling back-and-forth, pulling you in even though you know better, and then delivering an ending as expected as it is horrifying.

Moreover, the scene in Episode 3 is a well-written metaphor, subtly constructed but impossible to ignore. It tells us as much about Bridgette as it does about the series, pushing the character to new heights while driving the narrative forward. It’s “SMILF” at its best and more than enough to earn the series a slot in your TV rotation. You won’t spend long dwelling on the title, but you’ll want to stick with this story.

“SMILF” premieres Sunday, November 5 at 10 p.m. on Showtime. The series premiere is also streaming for free on YouTube.

This Article is related to: Television and tagged Frankie Shaw, SMILF, TV Reviews