Shazad Latif reveals what it takes to play the newest crew member on the Discovery. 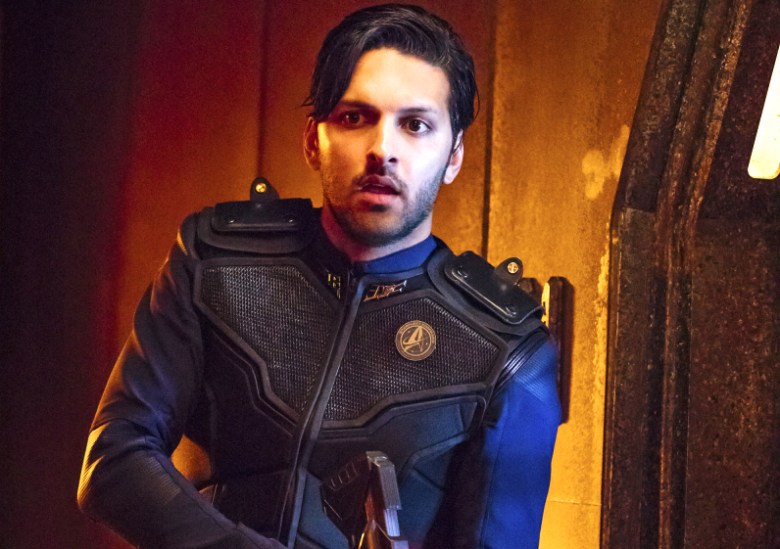 Now that the mutineer has settled in, and the tardigrade was freed, “Star Trek: Discovery” has welcomed a new crew member to its ranks. On Sunday’s episode, Lt. Ash Tyler (Shazad Latif) came on board after escaping a Klingon prison ship with Captain Lorca (Jason Isaacs) last week. Although the larger and tougher Klingons were calling the shots, the two Starfleet officers teamed up in a miniature prison uprising, taking the guards by surprise and fighting their way free.

“I think that moment of desperation, you hear stories of a mother lifting a car because of adrenaline in a desperate moment, if you need to escape you find a way,” Latif told IndieWire. “There’s moments of vulnerability among the Klingons, that’s why they broke their necks. The softest part of their neck is their throats, that’s probably the one way you can get in there, and use double-handed, blunt fists.”

Yes, for Trekkers who are familiar with Starfleet fighting styles, that is the double-handed punch that has been seen since “The Original Series,” such as when Kirk took on the Gorn. Here’s Ash executing the punch:

“That fight was pretty intense because you don’t really have a lot of time to learn all the fights, and it’s quite rough,” said Latif. “You get a lot of painful bending your neck back a lot and you have to have a lot of hot baths with bath salts and get massages, because it just hurts. You’re literally getting thrown into walls. It’s just pretty sweaty but hopefully it made for a good scene.”

As the duo make their escape, Ash also has a fierce encounter with L’Rell (Mary Chieffo), the Klingon who had taken a personal liking to him. It was implied that she had abused him. She shows up in the corridor behind him to ask how he can possibly leave after all they had shared, and Ash snaps, beating her in a frenzy. Given L’Rell’s interest in him, though, it’s possible this was merely arousing since Klingon mating rituals can get violent.

“I don’t know if L’Rell likes it, but I needed to just punch her to get out,” Latif said. “A little revenge punch. I don’t know how L’Rell felt about it. She’s seemed to have a liking before, I don’t know if she likes getting punched. You’ll have to ask her.”

Now that Ash is safely on the Discovery and out of her clutches, it’s possible that there will be fallout from his experiences aboard the Klingon ship for seven months. For now though, he appears to be in good health and spirits.

“He’s very resilient, he’s trained, he’s very good at his job,” said the actor. “But he’s gone through some horrible – for anyone to experience any of this, it’s very, very horrible. We see how he deals with that as the series goes on.” In the meantime, he’s earned Lorca’s trust and respect, not the least of which is for his excellent aim. During a holodeck battle simulation, Ash outshoots his new captain by a wide margin, but initially lies and quotes a much lower number of kills. “I think he’s paying respect to an older officer there, or a father figure,” said Latif. “He’s lost another captain, another ship. He’s just doing what a soldier would do, just trying to show respect to the senior officer.”

Latif’s reputation precedes him, and he has another admirer in Cadet Tilly (Mary Wiseman). Michael Burnham (Sonequa Martin-Greene) greets him more cautiously, but he makes it clear that he doesn’t plan to hold her mutineer past against her. In fact, he seems generally non-judgmental about everyone in Starfleet, including Lorca.

“I don’t think we really see many people like that on TV who have an openness about them, a vulnerability, which is one of the reasons why I love this character,” Latif said. “He’s a strong character, he knows how to fight, but he’s not a standard rogue, a classic hero action build that we’ve seen throughout the last 20, 30 years of cinema. He doesn’t have to be the kind to not show emotion or not show vulnerability.

“Same for Sonequa, she’s playing a strong woman and doing things that a lot of female characters haven’t done before,” he continued. “A lot was a balance of androgynous being in terms of your mindset, trying to balance your masculinity and femininity is very important. You can be vulnerable and you can be open as a man and still be strong, and vice versa for the female.” And yes, fans were right in detecting some chemistry between Ash and Michael in the cafeteria. “Yes, I think there is,” Latif said. “You’re going to see more of that.” It doesn’t hurt that he had also piloted the ship that allowed her to save her adoptive father Sarek (James Frain) either.

Although Lorca has insisted that he’s checked and double-checked Ash’s background and come up with a clean record, fans are suspicious of the new Chief of Security. In fact, one fan theory lays out details that hint that Ash may not be who he’s presenting himself to be. Latif wouldn’t address any specific fan theories, but he’s aware of them.

“My publicist has told me a lot of some of the stuff that’s been going around. It’s kind of great,” he said. “It’s the perfect ‘Star Trek’ fandom, the biggest, the craziest, the most in-depth and in detail. It’s sort of what we’ve expected from the ‘Star Trek’ fans, and it’s beautiful. They’re so interested in what’s going on in the show. Some of the theories are just crazy. Some of them get stuff right, but I’m really enjoying it. I like to retain mystery and I’d rather just watch the show and see how it plays out. For me that’s more exciting.”

Latif has become something of a fan himself and wants to show it. In one scene, Burnham and Tilly wear t-shirts for their workout that read “DISCO,” short for the Discovery.

“I really love the ‘DISCO’ shirts. I’m going to get me a couple of those, yeah,” he said. “I went and asked for them, ‘Where are you keeping those?’”

New episodes of “Star Trek: Discovery” are released at 8:30 p.m. ET on Sundays on CBS All Access.