The man behind the mysterious Captain Lorca also reveals why it was essential for him to know everything about the character before digging into the series. 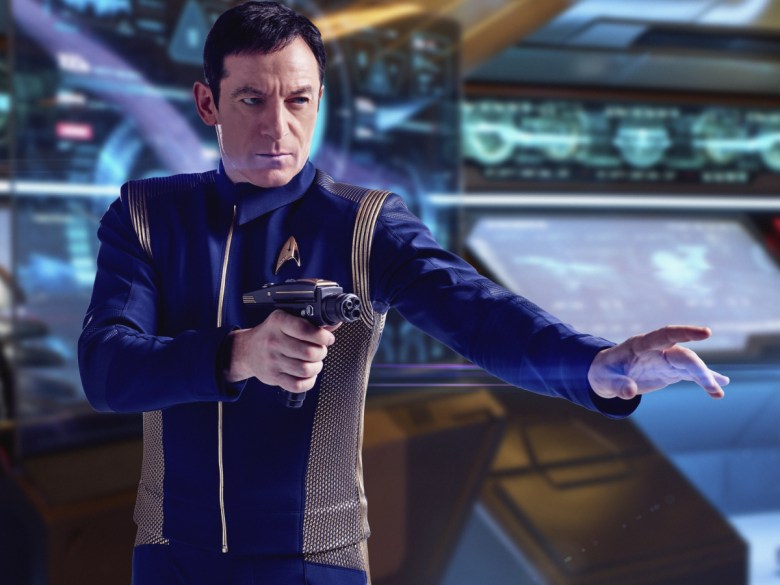 When Jason Isaacs was first asked to play a captain in the newest “Star Trek” series, his answer was a flat-out no. After all, “I loved ‘Star Trek’ growing up,” he told IndieWire. “Why would I even begin to try and pitch a tent at the foothills of Mount Shatner?”

But his agents encouraged Isaacs to read the scripts for the first three episodes of the series, now streaming on CBS All Access, and that changed his mind: “It was nothing like any of the weekly morality plays I’d watched growing up. What was written, at least, was the beginning of a long, rich, very different journey.”

There was still something of a leap of faith involved, because, as Isaacs was informed, “‘Oh, you’re not in [Episode 1] and 2… and by the way, ignore 3. We’re going to rewrite it completely.’ I went, ‘Okay. So, I’m sorry, why am I reading any of this?'”

The answer was that “Discovery” is attempting something very different from past “Trek” series, and these scripts were essential to giving Isaacs an idea of what he was being asked to join. “I did get a sense from it, and how differently framed it was and how it was much more of a rich, unfolding, complicated narrative, where you go much deeper into the characters and who they are and what they feel.” Captain Gabriel Lorca, in comparison to past “Trek” captains, is an entirely different species of character, which was important to Isaacs — because of his aforementioned love of the 1960s originator, especially William Shatner’s work as Captain Kirk.

“I must have seen the original series, every episode of it, multiple times as a child,” he said. “All we ever did as a family was watch television. And we argued about what to watch… There were only two channels. There may have been three, but we still argued, because my family liked to argue. Except when ‘Star Trek’ came around. We never argued about whether we were watching that. We would watch it as a family.”

But once Isaacs understood that he was playing a character who wasn’t set up as the hero, but rather a figure of mystery, he was much more excited — though he did ask to learn everything the writers could tell him about who exactly Lorca was, and what he was up to.

Thus, according to Isaacs, “the doors were thrown open to share in that discussion. This is the guy who’s tasked with something pretty impossible, which is to turn a science vessel and a bunch of explorers into the tip of the spear that’s gonna win a war against a vastly superior enemy in wartime. That’s a lot of burden to take on.”

But it was something Isaacs was able to play because he knows “everything” about Lorca. “Acting is not about learning the lines, and saying or doing what’s written in the script. It’s about the 99 percent of things that you’re not saying, and not doing. It’s about all the other things going on in your head that drive you. A very tiny amount of which leak out as your dialogue and your action. But most of which are about the inner landscape of your mind. Building that, in a way that is consistent and engaging, that is the work. Learning lines and saying them is nothing,” he said.

In playing Lorca, Isaacs wasn’t just working off what he was told by the writers. He was able to contribute his own ideas, as he did in Episode 3, which was directed by executive producer Akiva Goldsman.

“[Goldsman] was incredibly collaborative and lovely,” Isaacs said. “I had this notion that I wanted to be looking out the window all the time because I’m a man of action and I’m frustrated being trapped on this ship. I want to be in where the action is. I want to be somewhere else, making it happen. And he let me look out the windows all the time, including during battle. I don’t sit in the chair. I wander down to the front screen, or I stroll down and I command the battle like a man conducting an orchestra.”

Isaacs also suggested that Lorca have a Southern accent, “because I thought of him as a military man, but also able to be immensely charming, and that led me to the South.” And in general, he was happy that the producers were “very open to helping to create something original together. Because like I said, I would have run a million miles in the opposite direction if I thought I was trying to, in any way, step into those gigantic boots of my predecessors.”

Among Captain Lorca’s quirks is the fact that has a pet tribble on his desk — though Isaacs was not personally too excited about the iconic and adorable “Trek” creature.

“I wasn’t a fan of the silliest episodes of the original series, just because Shatner, particularly — well both of them, William Shatner and Leonard Nimoy — managed to make the most absurd things seem epic, and serious, and high stakes,” he said. “But even they, with their gargantuan skill set, couldn’t make a bunch of merkins into something that felt dangerous.”

(This statement made IndieWire laugh pretty hard, even though Isaacs was worried people might not know what a merkin is, suggesting that we “might put a hyperlink in.”)

Lorca’s tribble, like much of what we see on screen in this newest iteration of “Star Trek,” wasn’t executed on the cheap. “I saw someone online saying a tribble is cheap set dressing. Not this one. It had a bunch of operators, and a bunch of muscles, and moved, and made a noise, a little cooing when you stroked it, and purred. It’s really something,” Isaacs said. As a longtime “Trek” fan (despite his perhaps controversial tribble stance), it took a while for Isaacs to realize, deep down, that he was part of this 50-year-plus tradition. As mentioned, he initially avoided sitting in the captain’s chair, because “there was too much weight of history there.” But one day, he was “playing a probably ordinary scene, and then suddenly I transported to engineering, I think. I was playing a scene with someone and I had to say, ‘Energize.’

“It’s a pretty incongruous moment in the scene. It’s not even a very dramatic moment, it’s just a way of getting there,” he said. “But I had a wave of goosebumps, and felt a bit lightheaded, and I realized, about 10 seconds afterward, it was because I’d said, ‘Energize.’

“I had been there for a day or two shooting already,” he added. “It was just hearing the echo across 40-something years since I’d watched it as a kid. There I was, saying this word on the ship… I suddenly felt this kindred spirit across the ages. It’s like a chill goes through you.”

But never fear — Isaacs didn’t hesitate to get back to business. “There’s no real time for any of that kind of stuff, because someone’s firing at you, and you’re trying to captain a ship and keep yourself alive, so I was unable to come back to the moment. The time for nostalgia will be later. Right now, we’ve got a series to make.”