Plus, the Discovery crew will finally on an away mission to a planet. 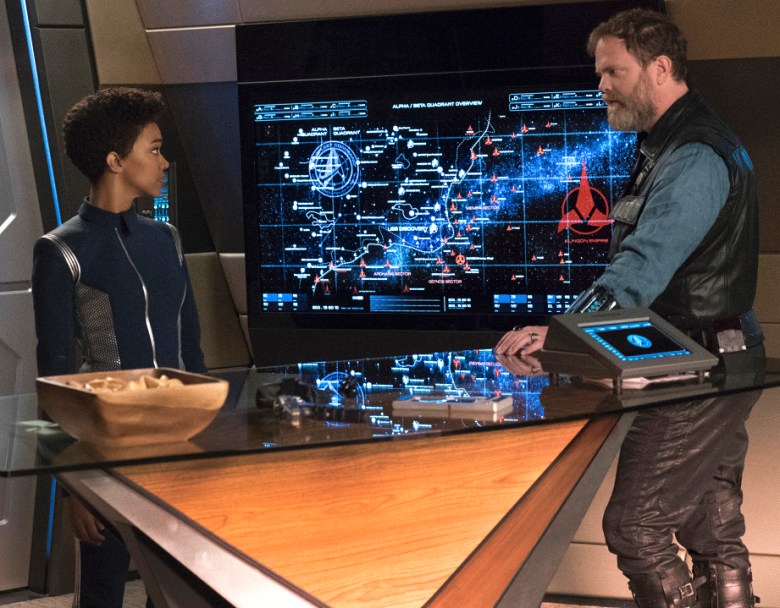 In “Star Trek: Discovery’s” most masterful episode yet, the series riffed off of the time loop trope a la “Groundhog Day” or “Star Trek: The Next Generation” episode “Cause and Effect.” Harry Mudd (the electrifying Rainn Wilson) subjects the Discovery to repeat the same chunk of time over and over again in order to buy himself time to learn what the ship’s spore drive secrets are, so that he can sell it to the Klingons. If that means he can also kill Captain Lorca (Jason Isaacs) multiple times in fun and innovative ways in the process, that’s a bonus.

While Mudd’s ability to recycle time was explained by the use of “time crystals” he wore on his forearm, it was never revealed exactly how Mudd was even free to board Discovery in the first place. The last we saw him, he was on a Klingon prison ship for non-payment of massive debts. Lorca and fellow Starfleet member Ash Tyler (Shazad Latif) were also imprisoned, broke free, but left Mudd behind. The episode never explains how he is a free man.

On “After Trek,” Wilson appeared, via Skype, to share his theory on how Mudd got out. He surmised that the Klingons had observed the prisoners’ interactions in their cell using hidden cameras and realized he would be far more useful to them “going after Lorca… so why not roll the dice?”

Mudd actually colluding with the Klingons would make some sense. Wilson pointed out that they could have “set him up with the gormagander,” aka space whale, because in all seriousness, how else would he have found one and then gotten his ship into it? They could also have hooked him up with the alien technology required to loop time.

Of course, if this theory is true, “that would make him cruel and mean to be working with the Klingons,” said Wilson. Well, yes. He’s killed Lorca upwards of 53 times, after all. This doesn’t seem too outside the realm of his character.

A few other highlights from “After Trek”:

In a sneak peek of next week’s episode, Saru (Doug Jones), Burnham (Sonequa Martin-Green), and Tyler land on a planet to seek out the source of a transmission. They appear to be greeted by a colorful aura that coalesces into a vague shape that could be an entity. But Turnham’s scan doesn’t indicate it’s a life form. It’s indistinguishable from the forest around them.

Anthony Rapp, who was in the “After Trek” studio, revealed that just reading the script for the episode made him weep and that Jones should submit this episode for Emmy consideration. Kirsten Beyer, who has written numerous “Star Trek” novels,” wrote the episode. Having injected himself with tardigrade DNA, Stamets has been able to connect to the spore drive, but it’s had two side effects. The first is to exist a bit outside time and space, which is what allowed him to see through the time loop. But his personality has shifted as well. The normally prickly astromycologist has become rather chipper and in touch with his feelings.

Rapp believes that the happy mood may not be the result of Stamets’ personality actually changing but what the tardigrade DNA has allowed him to see, which is basically an astromycologist’s heart’s desire.

“It’s opened up the mysteries of the universe,” he said. Also, it’s allowed Stamets to see that the universe is as “beautiful and magical” as he had imagined it would be. “Wouldn’t that transform you?”

A fan asked if “Star Trek: Discovery” would ever do a musical episode, considering that Rapp is a Broadway star. Behind the scenes, Wilson Cruz, Martin-Green, and Mary Wiseman have also been known to sing Christina Aguilera.

Neither Rapp nor Cruz would answer about the musical episode, but if they could pick musical instruments for their characters to play, Rapp selected the castanets, while Cruz picked the saxophone, which he can play in real life.

This Article is related to: Television and tagged After Trek, CBS All Access, Rainn Wilson, Star Trek Discovery