The alternate world of "The Serfsons" also made references to video games, RPGs, and fantasy novels. 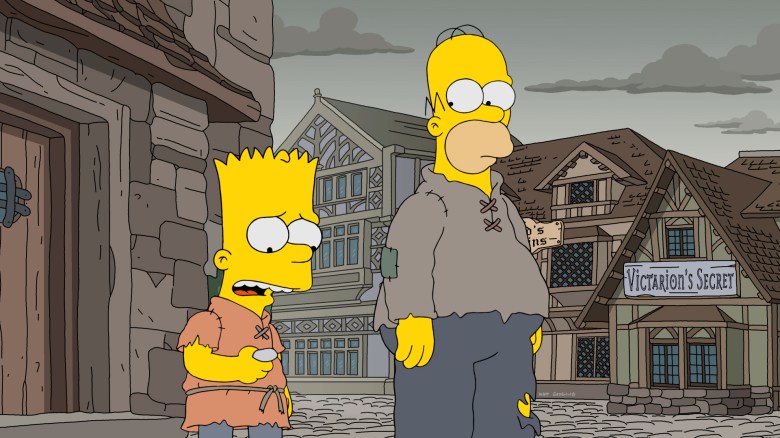 “The Serfsons,” Season 29 premiere of “The Simpsons”

Even though “Game of Thrones” fans are in for a very long hiatus before its final season, “The Simpsons” filled the void by paying homage to HBO’s fantasy epic on Sunday night. The animated series’ Season 29 premiere is set in an alternate world called “The Serfsons,” in which fantasy references abound from popular TV shows, movies, novels, video games, and RPGs.

First, it’s important to make the distinction between any general Medieval or fantasy reference and an actual homage to actual properties like “Lord of the Rings” or “Game of Thrones.” Even though J.R.R. Tolkien is accepted as the father of modern fantasy (high fantasy specifically), he did not invent the genre, and therefore many hallmarks of the genre – such as flying fire-breathing dragons – seen in the episode are not credited to any particular source.

To the best of IndieWire’s knowledge, here is every fantasy reference made in “The Serfsons”:

”Game of Thrones”: The music introducing the Kingdom of Springfieldia is reminiscent to the theme song for HBO’s series, composed by Ramin Djawadi, and “The Simpsons” theme song combined.
”Game of Thrones”: “King Quimby, the First of His Name” echoes the honorific title patterns seen in the show. Tommen (Dean Charles-Chapman) was also a “First of His Name” monarch.
”Game of Thrones”: This could be a stretch, but in the frame that touts “cunning wizards,” Professor Frink is seen in wizard’s robes summoning a shadow version of himself from the fire. This could be a light reference to how a shadow baby with Stannis’ (Stephen Dillane) face was birthed expressly to carry out an assassination.
Dungeons & Dragons: The three floating creatures fanning Lord Burns are Beholders.
”Game of Thrones”: Although severed heads on pikes have appeared before, the HBO series brought the practice to light when its hero, Ned Stark (Sean Bean), was famously beheaded in the first season, and his daughter was forced to look at the mounted severed head later. ”Game of Thrones”: A three-eyed raven lands in the window, which then becomes protein for the water soup the destitute Serfsons are eating. In the original show, however, the Three-Eyed Raven is a being with mystical powers and greensight, which is combo of clairvoyance, precognition, and retrocognition. (Of course, in “Simpsons” lore, it also calls to mind Blinky, the infamous three-eyed fish from Springfield.)
”Game of Thrones”: Marge’s mom is turning into an Ice Walker, which is a reference to the White Walkers and the mindless wights they create from the dead.

Dr. Hibbert is presented as the local barber/surgeon as well as apothecary for Springfieldia. Most of the references in his office are labeled potions on the shelf in the background.

”The Smurfs”: Krusty the Jester has come down with a jolly horrifying case of the genital snurfs, complete with high-pitched voices and white caps getting tossed from his crotch.
”Lord of the Rings”: One bottle on Hibbert’s shelf is labeled “Ent-draught.” These were magical draughts that the Ents drank to either refresh or nourish themselves. The only other time that anyone was known to have drank an Ent-draught was in the novel “The Two Towers,” when Merry and Pippin took it during their time in Fangorn forest and later became the tallest hobbits in the Shire, towering everyone else by a few inches.
”Harry Potter”: The “Polyjuice Potion” should be familiar to any Potterhead. It is used to temporarily transform the appearance of one person into another person, using a bit of tissue (usually hair clippings) from that person.
”Game of Thrones”: “Milk of the Poppy” is given to patients usually who need to manage pain or help sleeping. It’s most likely a reference to the real-life poppy flower that is the source of opium.
Dungeons & Dragons: “Barkskin +2” toughens a creature’s skin and enhances the natural armor with a bonus of 2.
The Legend of Zelda: The red potion restores health, the green restores magic, and the blue restores both.

The Quest for the Amulet of Warming As the cure for Marge’s mom of the Ice Walker disease, the Serfsons need to acquire the Amulet of Warming.

Dungeons & Dragons: Unfortunately, the amulet costs 100 gold pieces, or as Homer says, “100 GP — that’s more than a 10th-level fighter makes during an entire campaign.”
Dungeons & Dragons: The gelatinous cube is a wholly original monster by D&D father Gary Gygax that is a 10-foot square gelatinous cube that can absorb and digest organic matter. It’s a scavenger, but it doesn’t wait until something is dead to digest it.
”Game of Thrones”: Marge mentions she should have listened to the witch, which is a reference to the witch who had predicted that Cersei (Lena Headey) would become queen but lose all of her children.
”Game of Thrones”: Marge extends the Cersei reference to include a twin brother Markery (who looks like a male version of Marge) and is voiced by guest actor Nikolaj Coster-Waldau, who of course plays Cersei’s twin and lover in “Game of Thrones.”
”Game of Thrones”: A man who looks much like author George R.R. Martin, complete with cap, walks by Moe’s with a sandwich board that reads “The End Is Not Nigh” on the front and “I’ll Tell You When It’s Nigh” on the back, referencing how long fans have been waiting for him to finish writing the fantasy series source material.
”Game of Thrones”: Homer laments having to sleep on the “Iron Couch,” an homage to the Iron Throne.
”Game of Thrones”: Moe and Bart trade messages via raven instead of the usual crank calls.
”The Chronicles of Narnia”: The lion Aslan wearing a cross pendant tries to convert the Serfsons to Christianity. C.S. Lewis’ “Chronicles” is classic children’s fantasy novel series that often borrows from Christian themes, with Aslan standing in as a Christ-like figure. ”Lord of the Rings”: In celebration for obtaining the amulet and saving her mother, Marge wants to celebrate by making a special recipe: P. Jackson’s Overstuffed Hobbit. The recipe card instructs one to: Cut Hobbit into three pieces; Pack with unnecessary stuffing; Serves many, satisfies none. This is a reference to Peter Jackson adapting the Tolkien’s solo volume of “The Hobbit” as a trilogy of films. Later, Marge picks a hobbit from a cage to cook and Homer is seen chomping on a hairy hobbit foot.
”Game of Thrones”: Instead of the shop Victoria’s Secret, Homer stands near Victarion’s Secret, a reference to Victarion Greyjoy, one of Theon’s uncles.
”Magic: The Gathering”: Only the title is referenced when citing why Lisa’s use of alchemy is forbidden under the “Magic: The Gathering” Act. Elric of Melniboné: A reference to Michael Moorcock’s albino sword and sorcery antihero Elric of Melnibone is first seen in the town square with the sign that looks as if it reads “Melric’s Melniboners.” An albino Sideshow Bob is standing underneath the sign. Later, the Sideshow Elric gets a line, and there we can see that he’s also wielding Elric’s dark sword, Stormbringer.
Dungeons & Dragons: Before storming the castle, the villagers break into the Weapons and Armor shop.
”Lord of the Rings”: The tree-like Ents are an ancient race that appeared in Middle Earth around the time the elves did. They protect the forest. Sadly, here the beings are used to make ladders to scale the castle walls.
”The Dark Is Rising”: A major nemesis in the books by Susan Cooper is Mitothin, one of the great Lords of the Dark and also known as The Black Rider. In “The Simpsons,” a statue is seen inscribed with the words, “King Mitothin the Statue-Worthy.”
”Lord of the Rings”: The sketched portraits for each character mimic the end credits for “Lord of the Rings.”

”The Simpsons” airs Sundays at 8 p.m. ET on FOX

This Article is related to: Television and tagged Game of Thrones, Harry Potter, Lord of the Rings, The Simpsons