Grace running for office? It might have happened. David Kohan and Max Mutchnick on how "Will & Grace" found its new footing, and where it goes from here. 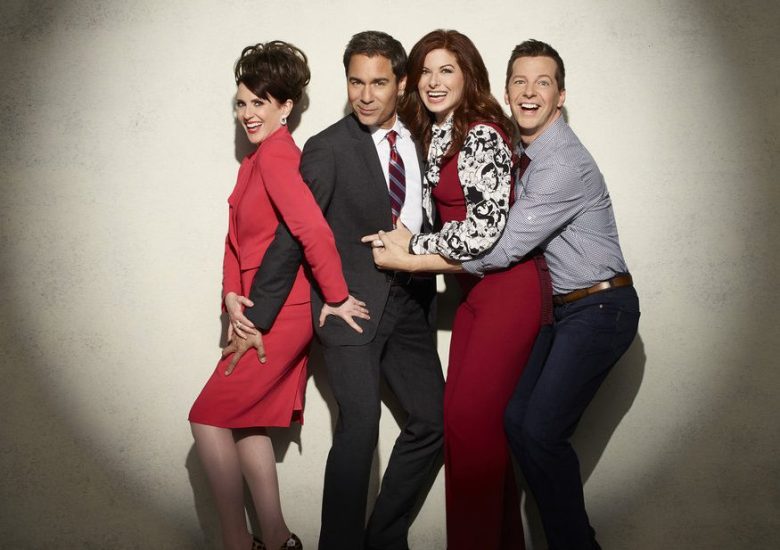 The recent “Will & Grace” episode “Grandpa Jack” included a storyline in which a young boy is forced to attend a “conversion” camp after his religious parents fear he may be gay. The joke, of course, is the camp is run by two obviously closeted leaders, played by real-life openly gay actors Jane Lynch and Andrew Rannells.

It was classic “Will & Grace” — poking at a real-life issue and injustice, but with plenty of humor. The episode also happened to air the same week that Donald Trump made headlines for reportedly making a quip that Vice President Mike Pence wanted to “hang” all gays.

“How is that not somebody who’s gay?” Mutchnick said of Pence. “Who gives a shit about someone that much? It’s just crazy, I can’t imagine caring that much about who somebody sleeps with as long as they’re of age.”

Added co-creator David Kohan: ” We live in a situation where we have seen numerous times the most outspoken anti-gay demigods always seem to be gay in the end. there is a precedent for this sort of thing. Plus, there’s whispers.”

For “Will & Grace” co-creator Max Mutchnick, Trump’s comment was a reminder of why it feels important that “Will & Grace” happens to be back on the air right now.

“I think it’s great that we got to make that episode, but it’s unbelievable that probably two years ago, we felt like we were almost done with [gay discrimination] as a story in America, that gay rights was about to really [move] toward equal opportunity for all.” Now, it appears that this new administration is willing to keep rolling back protections and support for the LGBTQ communities.

Mutchnick noted that “Grandpa Jack” wouldn’t have had the same kind of resonance had Hillary Clinton been in the White House. Instead, in the episode, a portrait of Pence hanged on the wall behind Lynch’s and Rannells’ characters as they attempted to preach straightness to a group of gay teens. By now, everyone knows the origins story of “Will & Grace,” starring Debra Messing as interior designer Grace Adler and Eric McCormack as her best friend Will Truman, who happens to also be gay. The show was inspired by the real-life friendship between Kohan and Mutchnick, and broke new ground when it premiered on NBC in 1998. It was an immediate hit, and laugh-out-loud funny — especially thanks to its two supporting characters, the boozy Karen, played by Megan Mullally, and the over-the-top Jack, played by Sean Hayes.

By the time the show ended in 2006, Will & Grace had won all four main actors an Emmy. And even vice president Joe Biden later noted how the show had paved the way for more understanding of the LGBTQ community.

Last year, the cast reunited for what was originally a one-off sketch to promote voting. But the die was cast, and “Will & Grace” was reborn. NBC picked up a 10-episode reunion season, which eventually ballooned to 16 episodes, and a second return season. For Mutchnick and Kohan, it’s been a welcome homecoming.

The duo recently sat down with IndieWire’s TURN IT ON to discuss the revival, how they worked around the tricky series finale by tossing it out, touching on politics in a Trump age, and how they feel like it will never get better than this. Listen below!

“The first six episodes was the thing that we focused on the most,” Mutchnick said of re-establishing the show. “All of the things that we needed to hit about this show and these characters and where they’re at.”

The challenge for the duo was figuring out how to undo some of the storylines they posted in the finale: Most notably, both Will and Grace had kids, and then fell out of touch for years. Rather than belabor the fine points of that series ender, the show’s returning episode quickly tossed away some of those plots by making a joke and winking at the audience.

“Audiences are sophisticated, they understand the process. If you don’t acknowledge it, they feel like you’re cheating,” Kohan said. “If you make too much of a meal out of it and try to make the logic work, then you’re overdoing it. So you acknowledge your audience, wink at them, and say, ‘please let us get away with this, we have more stories to tell with just these four characters that you’ll care about.’ We trusted that the audience would accept that.” But before Mutchnick and Kohan came to that conclusion, they first considered other ideas for the return, including having Grace run for office. “We started thinking of this right during the women’s march, and one of the things I said initially is Grace should drop what she’s doing and run for office,” Kohan said. “She does it on a very local level and it’s a series of humiliations until there is a triumph at the end. Max immediately had a problem with that.”

Once they settled on the story, they also had to contend with another obstacle: Audiences don’t watch as many multi-camera sitcoms as they did a decade ago. That’s why the producers have started adding a voice-over at the beginning of some episodes, reminding viewers that the show is shot in front of a live studio audience.

“It bothers the actors that anyone in the audience doesn’t think that those laughs are the laughs happening,” said Mutchnick. “I think sitcoms can still work. people have by and large given up on them. But when they’re done by great actors like what we have they can work.”

What began as a 10-episode run will now continue into next season, which means Kohan and Mutchnick are planning longer-term stories. “We know what we’re doing through the end of this season and we know what’s getting us into the next one,” Mutchnick said. “I can’t believe that we have figured out another corner to write ourselves into that we had not done yet. It surprised me that we were able to come up with something that we had never thought about with these four characters. We’re going to put them in that position at the end of this season.”

Back at the helm of the sitcom that defined their careers, the duo said they know they’ll never have it better than this. “The nights are electric,” Mutchnick said. “The actors are brilliant. The writers that we have in the writing room, half of them from the first run, half new, it’s an ideal situation.” This Article is related to: Television and tagged David Kohan, Max Mutchnick, Podcasts, Turn It On, Will and Grace