Director Sean Baker was wary of using a known actor for his latest project. Dafoe told IndieWire how he found a way to blend in. 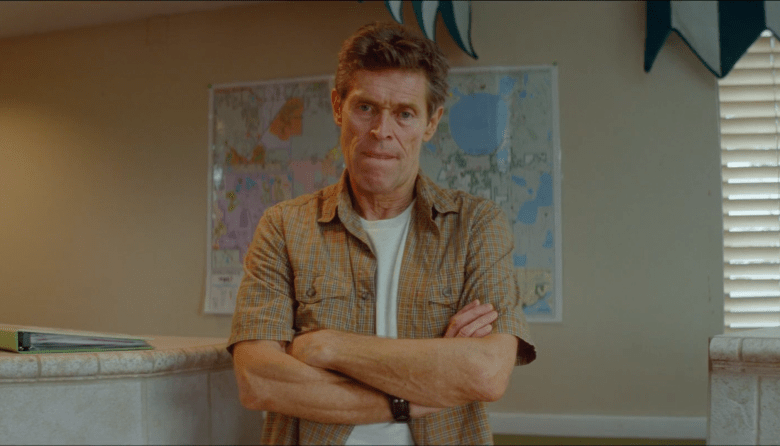 Willem Dafoe in “The Florida Project”

Willem Dafoe is a yogi when it comes to career dexterity. He’s equally comfortable in big, flashy blockbusters as ambitious, auteur-driven projects, juggling leading and supporting roles with ease. By the time he’s spotted in a misfire, he’s already got a gem in the pipeline. “The Florida Project” represents one of his most engaging performances in years, and makes him an Oscar frontrunner for best supporting actor, but it’a also a fraction of his recent output.

Two months before the Cannes premiere of “The Florida Project,” in which he’s the only veteran in a cast dominated by non-professionals, he surfaced in a cartoonish role opposite Matt Damon in the international blockbuster “The Great Wall,” and landed in two Netflix genre films — “What Happened to Monday” and “Death Note” — before the end of the summer. As “The Florida Project” finally comes out in U.S. theaters, he’s already wrapped his performance as the superhero Vulko in D.C.’s “Aquaman” adaptation, and is finishing a lead role as Vincent Van Gogh in Julian Schnabel’s biopic “At Eternity’s Gate.” He’s also gearing up for encores of the Hawthorne-inspired “The Minister’s Black Veil,” a one-man-show he’s performed across Europe.

How does one of the most recognizable faces in modern movies keep up the pace? He credits the one thing he’s not doing: Television.

“I’ve basically told my agents that I’m not interested in those projects,” the actor said in a recent interview. “There are many directors I want to work with in film, but I still have my theater pieces, so there’s no time. I think TV is a different culture. They say it’s the same, but I don’t believe it for a second.”

Despite his prolific output, Dafoe likes to take his time. In “The Florida Project,” he plays Bobby, the indefatigable manager of the budget motel housing lower-class pariahs on the outskirts of Disneyland. The actor spent a week in the grimy Florida scene getting to know the environment before he could settle into the role, which finds him contending with the irascible, unemployed tenant Hailey (Bria Vinaite) and her six-year-old daughter Moonee (Brooklynn Prince), whose innocent perspective dominates the film. Vinaite and Prince were acting novices, but Dafoe avoided letting his comparative experience get in the way of their chemistry.

“My job was to fit in with them, really,” he said. “Because there’s no uniformity to how acting works, you’re always dealing with a wide range of experiences. I think Sean invited me to collaborate with him more than usual, because that’s the nature of the character, he holds things together.”

Baker based Dafoe’s character on a real budget motel manager, and given the filmmaker’s naturalistic approach, he was wary of casting a name actor. “Our fear was that having a recognizable face would pull the audience out of it in a second,” Baker said. “The suspension of disbelief would be killed. But Willem is such a transformative actor, willing to take the time to develop the character and become this guy, that I felt like he could blend in.”

At the root of the movie is the theme of the “hidden homeless,” impoverished families cobbling together their lives in ramshackle hotels, where compassionate figures like Dafoe’s Bobby tolerate their struggles to survive. “I was amazed at the pride he took in his job,” Dafoe said of real-life counterpart John Manning of Polk City, Fla. “Talking to this guy helped orient me to certain kinds of class things, a history, how he carried himself. I see that as really key to the character.””He was one of a few that inspired the Bobby character,” said Baker, who gave Manning a “Special Thanks” in the credits.
“But the person who truly opened his world and heart to us.”

When Dafoe arrived on set, he had Bobby figured out. “He was becoming this Florida man we needed him to become,” said Baker, noting the actor got a spray tan in the days prior to the shoot. “He came to set saying, ‘I want these glasses, this necklace, this watch.’ He had just spent a week absorbing it all.”

Dafoe said he initially had concerns that the character’s good-natured support for a struggling underclass might seem one-dimensional, but that went away once he dug into Bobby’s practical mindset. “Bobby’s kind of an authority figure,” he said. “I didn’t think about modulation as much as I thought about how to accomplish these tasks. He has a different strategy for every person.” Throughout the movie, he fights to help Hailey through her decrepit lifestyle, plunking down cash when she’s forced to spend a night elsewhere, and scaring off an angry man that comes knocking at her door. While these scenarios help the movie develop its emotional core, Dafoe didn’t experience that in the moment. “When we were shooting this movie, I was not aware of this guy coming off as compassionate,” he said. “I was just trying to make things go smoothly. It’s not even about the people so much as he’s proud of the place — he wants to make it peaceful and well-run.”

Dafoe’s delivery reflects that logic. Even in some of his biggest scenes (including one seriocomic bit in which he chases off a potential child molester from the motel grounds), it’s never a showy performance. He gives the movie a sane foundation for its more idiosyncratic leads to react against. In a sense, he’s a mirror for the audience. “I think it has something to do with the humanity of it,” he said. “Everybody can kind of relate to this, even if they don’t specifically relate to the precarious situation these people are in. They can relate to people strategizing about figuring out their problems.”

Dafoe brings the same degree of curiosity to his big commercial roles. “It’s important to check in with studio movies if you can find interesting things to do in them,” he said. “I have my frustrations sometimes, but you never know how projects are going to turn out. There are so many wild cards, they’re so collaborative, but you can always stand by people who turn you on.”

For Dafoe, that means looking for directors who interest him, whether it’s Baker on “The Florida Project” or James Wan on “Aquaman.” Thats liberates him from considering the studio-indie divide. “I know there’s a difference that I can feel between ‘Aquaman’ and ‘The Florida Project,’ but I can’t categorize them,” he said. “They’re as specific as the movies themselves. They have different intentions, but when it comes down to it, when you’re inside of it, it’s all problem solving. That’s the beauty of it. I don’t reflect on it. I’ve never been particular to anywhere.”

If there’s a throughline to Dafoe’s career, it lies in the contrast between his roles. “I still like to work in all kinds of situations because I think it keeps you fresh,” he said. “It’s not to show off. It makes you keep on going back and reinventing your process, what you think your job is. The hardest thing when you’ve been doing this for a while is that you still love and are still figuring how to do it. And I do.”

“The Florida Project” opens in New York and Los Angeles on October 6, with a nationwide expansion to follow.

This Article is related to: Awards and tagged Interviews, Sean Baker, The Florida Project, Willem Dafoe