As Hollywood reels from the fallout from sexual harassment scandals, the Governors Awards took the high road amid the usual throng of Oscar contenders. 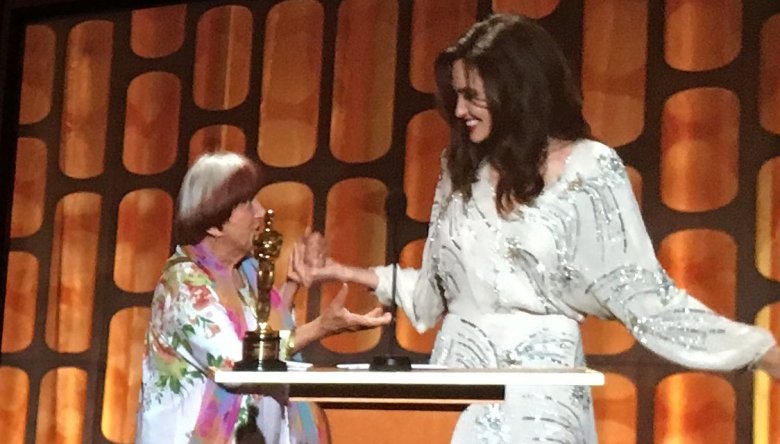 “Shitty is shitty,” new Academy governor Whoopi Goldberg told me of the vote to expel a member for the second time in AMPAS’ 90-year history. As everyone in Hollywood struggles to keep their head straight amid a flood of sexual harassment scandals, this year’s crop of Oscar contenders braved Hollywood and Highland traffic snarls to charm a room full of Academy of Motion Picture Arts and Sciences (AMPAS) members, including the 54 Governors who voted for this year’s five Honorary Oscars, presented at the 9th (untelevised) Governors Awards.

Behind the scenes, Oscar campaigners had pushed their clients as presenters. Clearly, it was a no-brainer to put Jennifer Lawrence (“mother!”) on stage to present to her “Hunger Games” costar Donald Sutherland (“M.A.S.H.,” “Klute,” “Don’t Look Now”), who never scored one Oscar nomination. “It’s odd that he never won an Oscar,” said Lawrence, thanking him for his generosity and guidance and a list of 50 books to read.

Speaking sans teleprompter, the 82-year-old Canadian recounted the phone call from “Ordinary People” cinematographer Bailey, who informed him that he was the new president of the Academy. “Congratulations,” said Sutherland. “No, I’m calling to congratulate you,” replied Bailey. “The door has opened and it feels like a fresh breath of air has come in,” said Sutherland, who thanked his wife of 45 years Francine Racette and his children, including CAA agent Roeg and TV star Kiefer, who were visibly moved by their father, who has never stopped working and gives a moving performance as a man with dementia  in “The Leisure Seekers” (Sony Pictures Classics) opposite Helen Mirren. Described by Agnès Varda as her “feminist guardian angels,” Jessica Chastain (“Molly’s Game”) and Angelina Jolie (“First They Killed My Father”) both celebrated the 89-year-old French New Wave pioneer, who was surrounded by such top brass of French cinema as Cannes director Thierry Fremaux, as well as her children and grandchildren. From the floor Varda made priceless silent video reactions to tributes to such films as “Cleo from 5 to 7” and “The Gleaners and I” before accepting her award onstage.

Varda started making films at age 25 and 63 years later is still going strong, with lauded documentary “Faces Places” in the Oscar race. “It makes me feel good,” she said, clutching her gold statue. “My films never made money but if not money I got many awards. ” After a sleepless night tossing in her bed she decided, she said, not to go in the direction of weight, but of lightness. At which point Jolie grabbed the 89-year-old’s hand for an impromptu dance.

More of a stretch was “The Florida Project” director Sean Baker’s tribute to African-American groundbreaker Charles Burnett (“Killer of Sheep” and “To Sleep with Anger”), followed by Tessa Thompson (“Thor Ragnarok”) and Chadwick Boseman (“Marshall”) and passionate presenter Ava DuVernay, who said: “Visibility remains highly political. Charles Burnett has made the black community visible. You have been a giant to us.” Burnett thanked his teachers at UCLA for helping to find his niche “making films as a tool for social change.”

Academy governor Steven Spielberg, who was sitting with his “The Post” producer Amy Pascal and star Tom Hanks, started out the evening with remarks that pushed the Motion Picture Academy’s role as a group of accomplished artists who seek to lead and inspire. “We aspire to be bigger and greater,” he said. To that end they gave Alejandro González Iñárritu a special Oscar for his and three-time Oscar-winner Emmanuel “Chivo” Lubezki’s extraordinary VR museum installation “Carne Y Arena,” which is still playing at the Los Angeles County Museum. “The biggest enemy of ideology is reality,” he said. Also taking the high road was Academy president and cinematographer John Bailey, who did not make any mention of the recent sexual harassment allegations that pushed the Academy to convene a special meeting and vote out alleged serial sexual predator Harvey Weinstein. Sexual harassment fallout was the main topic of discussion off-stage, however, along with the seismic changes in the industry, from the potential merger of Disney and Fox to the prospect of MGM and Annapurna releasing Bond 25. How the Academy will establish codes of conduct is next on the board’s agenda, which could involve stripping miscreant members of their voting rights. Around the room, would-be Oscar contenders were getting a kick out of meeting and greeting. Rob Pattinson (“Good Time”) popped up to greet Claes Bang (“The Square”), delighted that he had seen and liked his film; Danish star Bang is fielding Hollywood offers, while his own industry is going through its own round of sexual harassment allegations. Also breaking out this year is Timothée Chalamet (“Call Me By Your Name”), who admitted that he had met Steven Spielberg before — by reading for him. “Mudbound” star Jason Clarke talked Democratic politics as passionately as Ted Kennedy would have (he plays him in Byron Allen’s Entertainment Studios Toronto pickup “Chappaquiddick,” which has been pushed back to 2018). Christopher Nolan held court at the “Dunkirk” table, while the “Darkest Hour” screenwriter Anthony McCarten compared notes with “The Big Sick” writer-star Kumail Nanjiani. British “Star Wars” and “Detroit” star John Boyega held forth at the Annapurna Pictures table with his “Detroit” onscreen nemesis Will Poulter, writer Mark Boal and president Marc Weinstock. The Academy’s Bailey helped to push five-time Oscar nominee Owen Roizman (“The French Connection,” “Network,” “Wyatt Earp” and “The Exorcist”) to finally land an honorary Oscar. Roizman gave into tears at the plaudits from his peers Caleb Deschanel and Janusz Kaminski as well as presenter Dustin Hoffman, who praised the pioneer in gritty, soft-lit cinematic realism (and in-camera special effects) for making his makeup look good in “Tootsie” and earned several rounds of supportive applause from the crowd, despite his own recent harassment allegations. One of the calibrations the Academy is trying to make — along with everyone else — is how to cope with a spectrum of behavior without stripping masters of their craft of their laudable accomplishment. It’s a work in progress.