Writer-producer Sarah Polley and director Mary Harron have created an elegant show about an ugly time, one that proves addictive. 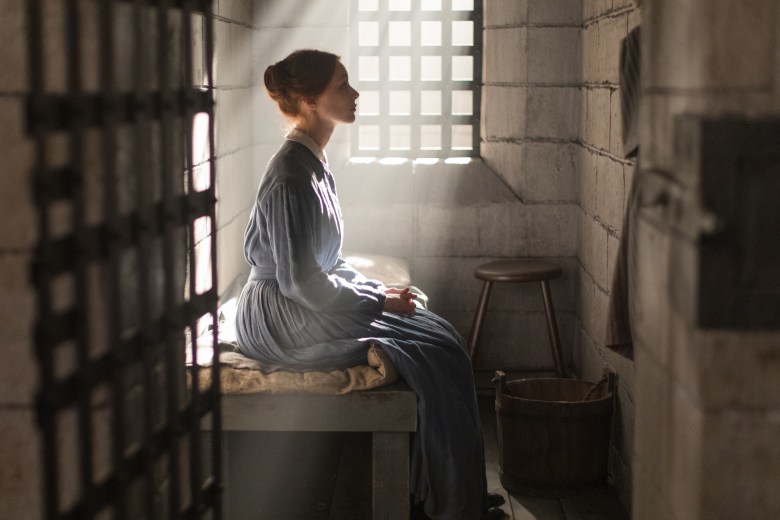 Brace yourself: You’re going to want to binge “Alias Grace.” The six-episode limited series — streaming now on Netflix following its world premiere at the Toronto International Film Festival and subsequent broadcasting in Canada on the CBC — is downright hypnotic, rapturous, and engrossing.

Watching evokes the sense of sinking into a great novel, which seems only fitting, given that it’s based on the 1996 book by Margaret Atwood, one of our greatest living novelists. But everything in the execution is owed to the detail-rich writing of Sarah Polley and direction of Mary Harron, who take this real-life tale of murder and give it rich depths, digging into the harm done to a human soul by a lifetime of oppression.

At the center of “Grace” is Grace Marks (played by Sarah Gadon in a star-making turn), a 19th-century Irish immigrant convicted of a notorious double murder, whose mental state comes under evaluation years into her prison sentence. Dr. Simon Jordan (Edward Holcroft), the doctor asked to examine her, digs into the story of what actually happened the day Grace’s employers Nancy (Anna Paquin) and Thomas (Paul Gross) were killed, and just how much “Grace” had to do with it.

As adapted by Polley (but using the structure of the book), “Alias Grace” darts between the past and present on hairpin turns, keeping us on our toes, ever unsure that we can really trust what we’re seeing. There’s no objective truth to be found in Grace’s memories as she tells her story to Simon, but as the different potential narratives clash some truths do seem to emerge — especially the fact that in a world where women experience the worst sort of oppression, the worst sort of actions may come of it. The details of “Grace” have a profound impact on every scene, as every aspect of Grace’s work as a servant is explored. But beyond the fact that watching Grace scrub a floor will give you a newfound appreciation for Swiffers, these details make this story feel as true as possible — even while the actual facts of Grace’s case are examined.

Unlike other period dramas, nothing is sanitized here; every possible bodily fluid makes an appearance, including 19th-century solutions for dealing with menstruation. But even though there’s a sequence which invokes memories of Sam Tarly’s chamber pot-cleaning in “Game of Thrones,” none of this is overly graphic, instead serving to give the series a vital sense of life, pushing “Alias Grace” into under-explored territory for the genre.

Telling this story is a dream team of Canadian talent: Polley’s shift in recent years from acting to writing and directing has given us lyrical works like “Away From Her” and “Take This Waltz.” Harron, meanwhile, has some experience not just with crafting period works, such as in “I Shot Andy Warhol” and “The Notorious Bettie Page,” but depicting violence with an edge and elegance unlike anyone else. Her experience making “American Psycho” especially seems to ensure that the many times we see Nancy die each have their own dark flavor, their own palatable sense that this is not playacting — a life is truly being lost. And Paquin plays the part beautifully, not just the death scenes but the slow-building deterioration of her relationship with Grace, bitter rivalry twisting a superficially pleasant connection into an emotionally explosive situation. Gross, as the seemingly good-hearted Thomas, finds his own moments to reveal his true nature, while the internal struggle Simon experiences over his growing fascination with Grace gives Holcroft’s time on screen far more depth than your standard therapist-patient dynamics.

It’s really Gadon’s show, though, as she plays Grace at every age, with every flavor. It’s a fearless performance and hugely demanding, but she manages to bring forth every buried layer of Grace, every version of her that might exist, and make them all feel like a part of the same person. Her transition over literal decades is occasionally a bit bumpy, especially as the make-up and hair departments deploy an almost too-subtle approach at times, but otherwise it’s an incredibly difficult acting challenge she makes look easy.

The final episode doesn’t quite stick the landing, as what feels like an epilogue gets dragged out far longer than might be anticipated. But it’s a pacing misstep that earlier episodes don’t experience.

Horrible things happen to Grace over the course of the series, so many of them rooted in the facts of her gender and her class status, because the world she lives in is a dangerous one for a poor girl from a different country. But at the same time, this time doesn’t feel all that different from today. Much like another Margaret Atwood adaptation, it’s a story about how the world finds ways to make women feel unsafe, and the damage that results.

The assumption you might make watching “Alias Grace” is that there are only two victims in this story. The truth is, there are far more.