The crew behind the show added a little more information about which characters are making the jump to the new episodes and what they were happy to see on Reddit. 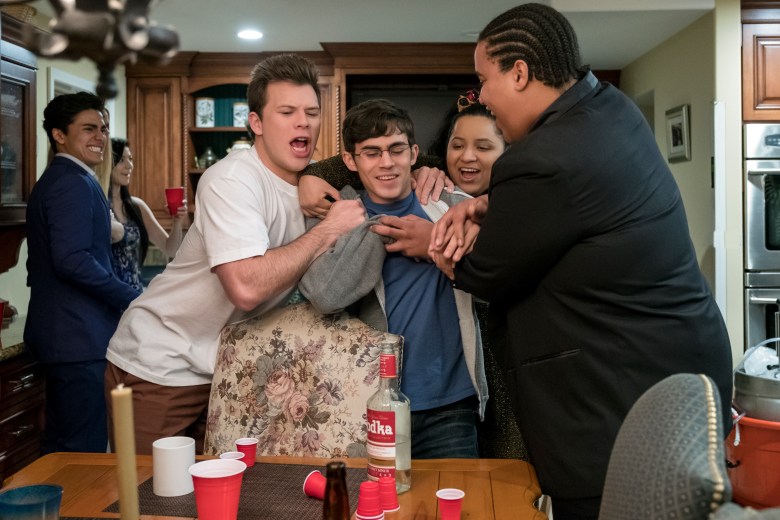 After “Who drew the dicks?” became one of the most intriguing TV mysteries of the fall, “American Vandal” is ready to ask a totally different question in Season 2.

Speaking at the Vulture Festival in Hollywood on Sunday night, series co-creators Tony Yacenda and Dan Perrault and showrunner Dan Lagana reflected on the success of the show’s first season and dropped some hints about Season 2.

In true mystery series fashion, they didn’t reveal too much of what’s to come in the show’s second season, but they did confirm some extra details related to the most recent teaser.

Yacenda, Perrault, and Lagana explained that the second season of the show would still involve high-school documentarians Peter Maldonado (Tyler Alvarez) and Sam Ecklund (Griffin Gluck), but that the rest of the cast would be revealed at a later time.

“It’s far away from Hanover High School, but it’s in the same universe and Peter and Sam are making a documentary about a new crime,” Yacenda said.

As for whether Season 1 favorite Dylan Maxwell (Jimmy Tatro) would make an appearance, they were less definitive. But they hinted that this new crime would likely be far enough away to leave Dylan behind.

Read More: ‘American Vandal’: How Two Guys Combined ‘Making a Murderer’ and ‘Freaks and Geeks’ and Got One of 2017’s Best Comedies

Aside from the nuggets about what’s to come, the team also shared some of their favorite alternate explanations for who might have actually been behind “the dicks.” Everyone on the panel (including Tatro and Alvarez) reiterated that their intended final conclusion is what Peter strongly hints at during the close of the final Season 1 episode. But they enjoyed combing through online chatter for the additional theories.

“Pat Micklewaite and Christa is a good one,” Yacenda said, “since they were in Strategy Club together.”

“Ming and the janitor, that they had a bonding experience over Ming cleaning up the food fight. The janitor was mad about the hairs in the shower, so he did it, and Ming was like, ‘I got you.’ I don’t know how it would work out, but I love Ming and the janitor,” Perrault said.

“Reading that theory on Reddit? That was awesome,” Yacenda said.

Regardless of what people took away from the final moments, Lagana is glad they got to end it the way they did.

“The last moments of the season aren’t funny, and I love that about the show,” Lagana said. “Everyone came for the dick joke and I feel like we delivered on the comedy, but man, we tried to make you feel something else at the end.”

“American Vandal” Season 1 is now available to stream on Netflix.

This Article is related to: Television and tagged 2018, American Vandal, Netflix