Creator Terri Minsky reveals which cast members contributed details of their own family’s traditions to the episode. 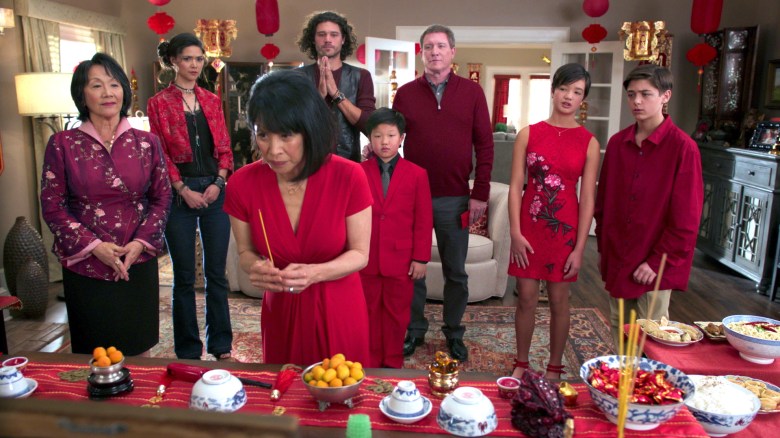 Disney Channel’s “Andi Mack” centers on a multigenerational family that has Chinese roots, but the show never really addressed that heritage with any depth in its first season. That’s going to change with Friday’s episode, “Chinese New Year,” which will go inside the Mack home as they celebrate the Lunar New Year.

Creator, writer, and executive producer Terri Minsky told IndieWire why the show decided to feature the traditional Asian holiday on the show.

“While ‘Andi Mack’ was not originally conceived to be a show about an Asian-American family, when we cast Chinese-American actress Peyton Elizabeth Lee in the title role, we then cast other Asian-American actors to play her family members,” she said. “The stories are meant to be universal about a teenage girl dealing with her life, and at the core of her life is ‘family.’ So, the Chinese New Year celebration at the Mack house is a perfect setting to tell more stories about this family.”

In the series, Andi’s (Lee) and her mother Bex (Lilan Bowden) are both part Chinese, while Andi’s grandmother Celia (Lauren Tom) is full Chinese.

The show did its research in order to portray the holiday and its traditions accurately, such as having the character wear red for good fortune and luck.

“Our story editor Elena Song exhaustively researched and sought out the advice of many people about every detail on the holiday — food, decor, rituals,” said Minsky. “Our costume designer Anthony Tran considered many different outfits for each character and had Andi’s dress specially made for her.”

Take a look at the dress below, which appears to be a more modern and casual take on the traditional qipao.

“We also knew that Chinese New Year was personally meaningful to our cast members, Lauren Tom, Lilan Bowden and Peyton Elizabeth Lee, who each informed the traditions we included in this particular episode,” Minsky said. “They shared stories with us about their family celebrations. Traditions for the holiday are very different from family to family.

“We felt it made obvious sense to take Lauren Tom’s guidance, since we were, after all, celebrating the holiday in Celia’s home,” Minsky continued. “The incense ceremony depicted in this episode is actually one of Lauren Tom’s personal family practices during Chinese New Year, and she provided us photos of her own grandparents to be used in the scene.”

Tom even added a personal touch to the script by ad-libbing one line.

“In the scene involving a barbed exchange between Celia and her sister Mei, Lauren Tom improvised a fantastic ending,” Minsky said. “It was supposed to end with Mei’s exit, but then Celia made a hissing snake gesture behind her sister’s back. Lauren was instantly ashamed of herself for doing that in front of an ancestor, and she apologizes to his picture: ‘Sorry, Grandpa.’

“These are the kind of great moments you get when the actors are so connected to the stories. We’re proud of how this episode turned out. We think it’s a great reflection of the show’s efforts to reflect the diverse world kids experience.”

Chinese New Year was celebrated on a TV show for the first time in 2016. “Fresh Off the Boat,” which airs on Disney Channel’s sister network ABC, blazed the trail for the holiday on TV when the Huangs celebrate it for the first time since their move to Florida, and the show has featured it every year since. But “Andi Mack” offers its own take on how the holiday is observed.

“Andi Mack” was also in the news recently for its Season 2 premiere, which introduced the beginning of a storyline in which one character realizes he’s gay, a first for Disney Channel. The episode was the No. 1 TV telecast in its timeslot in all the youth demographics and the top cable TV telecast in total viewers of the night. It was up 72 percent from the Season 1 debut in April.