As a new season is on the horizon, we made our picks for our favorite installments of TV's best anthology series. 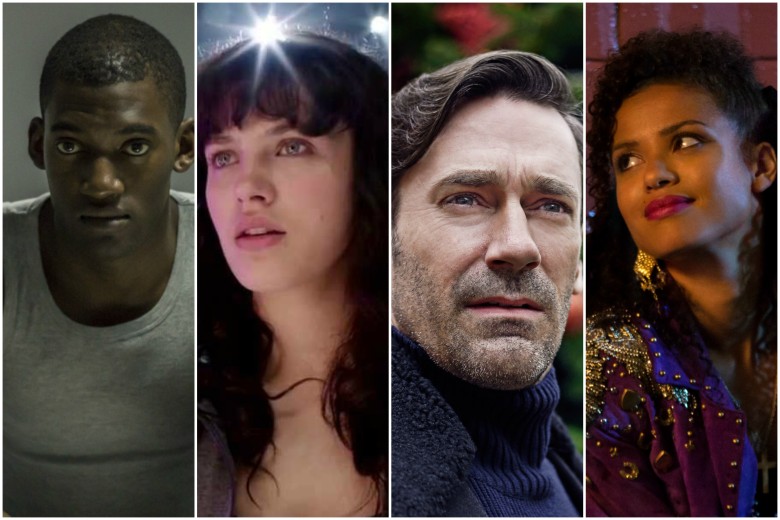 “So I just started ‘Black Mirror’ and, um….” “National Anthem” is an episode that launched a thousand unfinished sentences, as fearless an opening statement as any TV show has ever made. That Scene gets its share of deserved praise for sheer audaciousness, but it’s the closing sequence of the episode that really sells the idea of the show overall. It’s not just about the ways that technology can bring about mortifying circumstances, it’s the idea that absurd developments can irrevocably change the most foundational relationships in a snap. And it underlines the idea that no one is exempt. Compromising demands on our privacy and our day-to-day life are just as viable for the hospital attendants watching the drama play out on TV as it is the Prime Minister (Rory Kinnear), forced into an unthinkable spot. Amidst the doom-laden premises and occasionally fatalistic approaches to future problems, “Black Mirror” can still be thrilling the further it veers from the norm. Take this monochrome, dialogue-sparse “Terminator” riff that also manages to address ideas of militarized technology, environmental repercussions and the all-encompassing drive for survival better than previous installments did. Maxine Peake anchors the entire episode on a physical and emotional level, bringing an equal amount of resolve and terror to her character’s quest to evade a murderous robotic guard dog. It’s as primal as it is minimal, but still creates a vivid hope-deprived world in black and white. From gorgeous, haunting overhead shots to a dog’s-eye view of its prey, there’s a measured way to how “Metalhead” approaches space that makes it the season’s most chilling and grounded episode, all the way down to its final reveal. An unabashedly romantic installment that serves as something of a spiritual sequel to Season 3’s “San Junipero,” the basic concept of a relationship simulator putting avatars through the rigors of romance in order to lock down a perfect match works really well during a first viewing. When you watch a second time, knowing the twist is a bit of a bummer, but the incredibly well-cast and engaging Joe Cole and Georgina Campbell compensate well for that, forming a couple we have no doubt are a 99.8 percent match. While some of the most potent “Black Mirror” episodes focus on people trying to escape things outside of their control, this episode is proof that getting exactly what you want can be just as paralyzing. Proof that the show can do romance just as good as any darker human emotion, the unconventional love story between a woman and the replicated android version of her late husband is a consideration of what makes us human and what we are willing to sacrifice for our own version of happiness. It’s not easy to imbue a robot with just the right amount of personality to seem both loving and frightening all at once, but it’s a divide that Domhnall Gleason manages to pull off. And the overriding, conflicted nature of her life-salvaging purchase gives Hayley Atwell the chance to deliver one of the best performances in the run of the series. “Black Mirror” can weave an intricate plot if it wants, but sometimes this kind of focus on one relationship leads to the most satisfying kind of story. While the theme might appear simplistic — the possibly devastating consequences of our obsession with trends on social media — the execution of this feature-length episode is nothing short of masterful. Quite honestly, we’d watch a series of Kelly MacDonald as Det. Karin Parke solving crime any day, and the initial procedural feel of this murder-mystery episode is so well done that it lulls the viewer into a sense of complacency. It’s downright seductive. The killer is not the expected psychopath, and the climax is so understated and yet so devastating that it leaves the viewer unsettled and uncertain. Add to that some nuanced and naturalistic performances, several references to the bigger “Black Mirror” universe, and a haunting soundtrack, and this is perhaps one of the most beautifully and tightly crafted episodes to date. This poignant installment is a spiritual cousin of “Be Right Back,” in that it has a loving relationship at its center and tries to offer a solution to inevitable mortality. While “Be Right Back” played off the horrors of technology approximating humanity, “San Junipero” offers hope in the form of a digital afterlife. Born out of Charlie Brooker trying to upend expectations, it’s no wonder that this feels the most different from other episodes.

The 1980s-era California setting and the heartbreaking performances by Mackenzie Davis and Gugu Mbatha-Raw combine to make what should be a rather prosaic love story. Oddly enough, the sci-fi twists don’t make the story feel more alien, but more relatable. Aging is inevitable, loneliness is very probable, but hope is possible. There’s a reason that this particular installment of the series won two Emmys. The concept itself is immediately intriguing and touching, but what really sets it over the top is its surprising optimism. You don’t need half-formed monsters or hellish serial killers to craft the perfect on-screen nightmare. What’s scarier than having to live with yourself and precisely no one else? The cavalier way that Jon Hamm’s Matt dials up another decade of punishment in solitary confinement for his digital egg prisoner and takes a nonchalant sip of coffee is one of the most devilish on-screen actions in TV history. The prospect of being walled off in an empty cell is a brutal fate, but for a show that comments on the increasingly connected world we live in, isolation feels like even more of a punishment. Toss in the idea of eternal repetition, of being condemned to relive a single experience in that loneliness is enough to make a murderer out of the most rational, sane individual. That potential is the fuel that fires the darkest of dystopias. Moral ambiguity, an ingenious change in perspective, legitimate terror: all the “Black Mirror” hallmarks in one convenient location. Even the intercredits scene tacks on another layer of understanding to a terrifying situation. Disorienting right from the start, as one young woman is thrust into a life-or-death battle with camera-equipped onlookers, “White Bear” doesn’t just save the surprises for an episode-ending reveal. Completely shifting our perceptions of this twisted game multiple times over the course of its runtime, it manages to reinvigorate some familiar tropes of zombie movies and vigilante stories while engaging our capacity for revenge. Playing with memory is part of the “Black Mirror” mission statement — watching someone being punished for something horrific when they’re the only one who doesn’t remember what for is both the show at its most fiendish and insightful. While “Galaxy Quest” is the ultimate homage to “Star Trek” fandom, “USS Callister” delivers us a brilliant parody of the original series itself, interpreted through the psyche of an anti-social coder. The delightful sets, ridiculous scenarios, and hokey alien encounters would’ve been enough to thrill any Trekker, but the performances bring the tribute to the next level. Seriously, Jesse Plemons’ Shatner impression is so lovingly wrought that it would bring a tear to Spock’s eye. We would pay Plemons to read the Starfleet Spacefleet manual. The rest of the cast is just as game and committed, which also contributes to so many moments of levity, a precious rarity in the “Black Mirror” universe.

But what makes “USS Callister” superior to all the other episodes that have come before is its storytelling, which turns the usual formula on its head. Quite often, “Black Mirror” episodes follow a pattern: introduce the dark concept, chart an increasingly dark trajectory, brace for the inevitable bummer at the close. While a cheery ending isn’t necessary — the show is called “Black Mirror” after all — the one-note pessimism of these resolutions have become increasingly familiar. But here, the warped, misanthropic Daly (Plemons) gets the just desserts visited on many “Black Mirror” villains, carrying with it a tiny bit of optimism. Throw in genuine suspense, a heist-like storyline, and an ingenious feminist character who is able to turn the villain’s sexism on him, and you get an episode that will be hard to top. Technology isn’t all bad after all.

“Black Mirror” Seasons 1-5 are now available to stream on Netflix.

This Article is related to: Television and tagged Black Mirror, Lists, Netflix