Killers, kingpins, turncoats, and a couple of horrible bosses: the on-screen characters we love to despise. 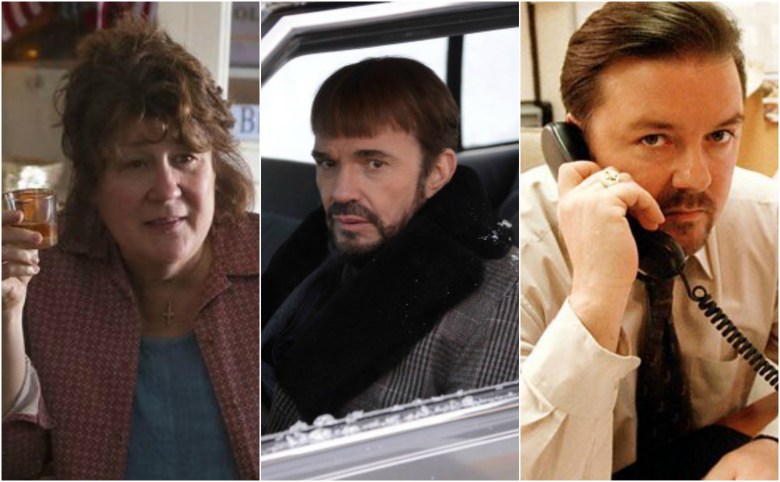 Ask the average viewer to conjure up their idea of a TV villain, their answers might vary: Perhaps a spiked baseball bat-wielding maniac or a faceless Killer of the Week on a police procedural.

And then there are some villains that have existed in various forms on the small screen for decades: abstract ideas like alcoholism, technology, or ratings. As the line between reality and fiction start to blur and a non-stop entertainment news apparatus churns ever on, even people from off-screen within network power structures have frequently worn the black hat, from Ailes to Zucker.

As we enter into a new era of on-screen terror, real life antagonists have seeped into a TV landscape that’s engaging with the political realm more than ever. They’ve made some fictional bad guys seem even more relevant and have left others wilting in obscurity.

So when putting together our consideration of the best TV villains introduced since 2000, as much as we’d like to include Old White Men or Bears, this is is a list entirely peopled by humans. Each one plagued their fictional counterparts and existed to combat all that their rivals stood for. Some were successful. Some met their comeuppance. Others simply faded away.

[Note: Plenty of years-old spoilers below. As one of our picks might say, “There be dragons here.“] Marissa Cooper, as played by Mischa Barton, caused nothing but problems in the O.C., particularly with brooding boy Ryan. Last year, commemorating the 10th anniversary of Marissa’s death in a Newport Beach car accident, creator Josh Schwartz admitted that he was still haunted by the decision to kill the character off, a move that caused an uproar for some fans. But he shouldn’t be. As this 2014 Bustle article noted, Marissa Cooper was the worst. Loyalty to the club has its costs. Clay (Ron Perlman) and Gemma (Katey Sagal) killed her husband, John, when he attempted to go legit. Clay ran SAMCRO, the club at the heart of “Sons of Anarchy,” but it was Gemma who really ran things through lies and manipulation. Gemma won’t get any Mother of the Year prizes for what she did to her son, Jax, namely getting caught in a battle with Tara (whom she eventually killed) to control her son. So many deaths, including her own, were put into motion (sometimes inadvertently, sometimes not) by Gemma Teller Morrow. Before the U.S. version of “The Office” gave us the much more benign Michael Scott, original “The Office” creator Ricky Gervais introduced the world to David Brent. As the general manager of the Slough branch of Wernham-Hogg, he’s the most clueless, obnoxious and oblivious kind of boss imaginable. His cringeworthy interactions with his staff brought some to tears, and others to roll their eyes. The idea of being “a friend first and a boss second… probably an entertainer third” was a cry for affection, ultimately, and just exacerbated his poor management skills. Ultimately, it was shown that the “Office” documentary crew exaggerated his incompetence for storytelling, but David Brent has become the epitome of awful bosses the world over. And those may be the biggest villains of them all. Backstabbing and double agents became the norm as the run of “24” progressed, but it’s easy to underestimate just how shocking the Season 1 finale was back when it aired. As the show became a runaway hit, former CTU agent Nina Myers set the template for an ever-changing roster of big bads over the course of successive seasons. Killing Jack’s wife in the show’s first finale was a major jolt to a show that probably could have rested on political intrigue if it chose to. But Nina‘s part in the story not only made the show a more personal pursuit for Jack, it set the bar for how much the show was willing to outdo itself season over season. Exploding a nuclear bomb seemed like the only way to go from there.

Through Leslie Knope and her co-workers, one of the ambitions of the characters on “Parks and Rec” was to use positions of authority to do good and improve the lives of the people in their community. No character represented the antithesis of that more than Jeremy Jamm, city council member and orthodontics enthusiast. As a stand-in for petty obstructionism at every level, Jamm took aim at Leslie nearly every chance that he could. Jon Glaser was able to double down on every pigheaded bro stereotype and somehow spin that into a character that you believe some Pawnee residents would find appealing. He’s a reminder that sometimes (OK, most times these days), the idiots win. Even though he showed a glimmer of an ability to change his ways as the series progressed, never trust anyone who gives themselves their own catchphrase.

Page 1 of 4
Continue Reading: The 20 Best TV Villains of the 21st Century

This Article is related to: Television and tagged Fargo, Lost, The Leftovers