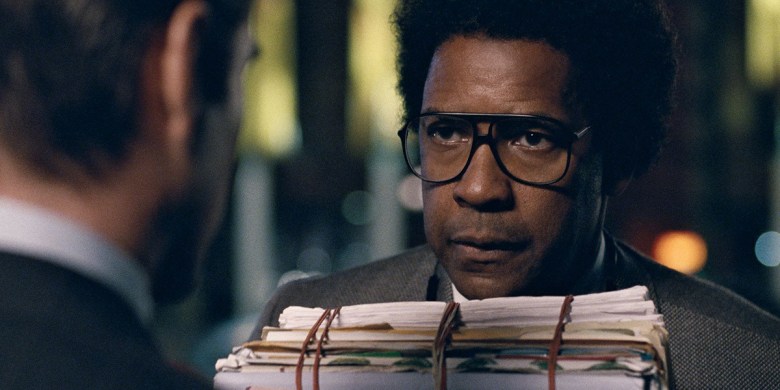 Leading fall Oscar contenders “Three Billboards Outside Ebbing, Missouri” (Fox Searchlight) and “Lady Bird” (A24) continue to pull crowds as they both expand after limited openings. They are the top performers by far among specialized films this weekend, including the platform debut of “Roman J. Israel, Esq.” (Sony).

The Denzel Washington legal drama had a modest debut in four New York/Los Angeles theaters before its wider release on Wednesday. The fate of Dee Rees’ acclaimed “Mudbound” (Netflix) is the compelling story of the weekend. The ’40s southern farm drama opened in a handful of big city theaters parallel to its home-viewing debut, with grosses unreported by Netflix. We are estimating its performance based on limited indications from several theaters.

Also getting strong reviews for its New York-Los Angeles debut, the Chilean Oscar submission “The Fantastic Woman” (Sony Pictures Classics) opened for a qualifying week with no grosses reported. It is scheduled for regular release in February after its likely nomination.

Few awards contenders this season will receive the level of acclaim, media and marketing support as “Mudbound.” Netflix acquired all rights for the film at Sundance for a 2017 record $12.5 million, and are spending more in order for the film to make its mark for awards consideration as a typical theatrical release.

Among the top theaters were the Lincoln Plaza and IFC Center in Manhattan and the Landmark in Los Angeles, the usual for initial platform runs. The rest included several from iPic, the chain that regularly exhibits Netflix titles, plus five additional Landmark locations and two from the Laemmle circuit in the Los Angeles area.

Based the on-line pre-reserved seating site for the Landmark in Los Angeles, the 104-seat theater, with five shows a day, sold out or came came close about seven times, with similar likely on Sunday. With a top ticket price of $15, that would lead to a gross of around $15-20,000 for the weekend there. Though reports aren’t available for the two main New York locations, a similar gross seems likely. The Landmark performance looks similar to “The Meyerowitz Chronicles (New and Selected)” on its initial weekend day and date with its Netflix premiere.

Numbers did initially show up for two other Los Angeles theaters for Friday, suggesting a combined grossed around $4000 each for the weekend.

While the range of this potential estimate is great, an educated guess would put the range of grosses for these 18 theaters somewhere in the range of $80,000-120,000. That would normally be mediocre, but well ahead of “The Beasts of No Nation,” which in a similar limited release of 17 theaters grossed $51,000.

This performance is hard to judge — while critics are urging moviegoers to see this epic picture on the big screen, many people are presumably sampling “Mudbound” at home. The real question is how many awards voters give the movie a look, and how they respond. As such, consider it a work in progress.

What comes next: No clear word on what happens in theaters next, but a second week in New York and Los Angeles is likely.

Director Dan Gilroy (“Nightcrawler”) returns to the underbelly of Los Angeles with this drama about a crusading lawyer, played by Denzel Washington. Re-edited and cut by 12 minutes after its Toronto premiere, Sony gave the drama elevated platform attention at four top New York/Los Angeles theaters in an effort to elevate its Oscar-perennial leading man for awards attention. The result is about half of “Fences” at four similar theaters on a pre-Christmas weekend last year. With mediocre reviews, this is not a disaster going into wide release this Wednesday, but it does come in far below top-flight openings in the past two weekends of “Lady Bird” and “Three Billboards Outside Ebbing, Missouri.”

What comes next: 1,500 additional theaters open in time for Thanksgiving.

GKids picked up this animated feature from the creators of the Oscar-nominated “Song of the Sea” and “The Secret of the Kells.” The Afghan drama about a young girl who dresses like a boy to survive the Taliban won Best Film at the recent Animation is Film Festival and is backed by executive producer Angelina Jolie. With strong reviews, “The Breadwinner” scored a credible gross despite a fairly low profile against top new openings in New York and Los Angeles.

What comes next: More cities add on this Friday, with a further expansion the following week.

The Exterminating Angel – The Met: Live in HD (Fathom Events)

Fathom Events (which include a range of films — last weekend was a restored “Casablanca” in partnership with Turner Classic Movies) shows live operas about ten times a year in select theaters. This showing of an new opera based on Luis Bunuel’s Mexican classic “The Exterminating Angel” did decent business across the country as the New York Metropolitan Opera presentation was shown live in the late afternoon or evening. The result was good enough to barely miss the Top Ten gross among all films this weekend despite only one show per theater

What comes next: This will have an encore showings at most theaters on Wednesday Nov. 29.

Jean Renoir’s 1935 masterpiece has one of the best initial grosses for a restoration/reissue this year, and one of the best ever for a pre-1940 film. It opened at Rialto’s usual New York Film Forum location to strong results.

What comes next: This opens Wednesday at the Royal in Los Angeles, that city’s most sought out theater for prime subtitled films. Three Billboard Outside of Ebbing, Missouri

Martin McDonagh’s acclaimed off-beat dramedy starring Frances McDormand delivered a strong expansion in its second weekend. It managed to land #9 overall among weekend films despite only 53 theaters. The gross falls below “Lady Bird” in 37 theaters last weekend on week two, but “Three Billboards” had more competition (a factor that will affect other similarly strong releases as the season heats up). This looks primed to do significant crossover business as it expands to over 400 theaters this week and more after.

Joachim Trier’s drama, Norway’s Oscar submission, added two theaters in advance of it Los Angeles opening this week to continue its modest initial numbers along with its decent reviews so far. Greta Gerwig’s coming of age quasi-memoir continues to lead among fall releases at this stage, with a per-theater average in its third weekend similar to “The Big Sick,” the year’s biggest specialized success thus far. With much more competition this time of year, that’s even more impressive.

The sleeper of the season continues to show strength as the animated Van Gogh biography is still strong more than two months into its run.

Sean Baker’s well-received film about a lively six-year-old girl in Orlando continues to add to its decent returns late in its run. Yorgos Lathimos’ follow up to his surprise success “The Lobster” looks like it will end up around $2.5 million in domestic totals after his earlier film took in over $9 million.

This sleeper graphic novel adaptation about the serial killer continues to expand and show interest as it reaches a broader audience.

Reginald Hudlin’s biopic of the early career of Thurgood Marshall holds on in some theaters after a wider run as it heads to a $9 million+ total result.

New footage from primate research Jane Goodall has resulted in one of the few documentaries this year to  pass the $1 million theatrical mark.

Richard Linklater’s latest, an Amazon Studios presentation, continues to struggle as it expands to more cities. Sweden’s Cannes Palme d’Or winner continues to do better than most subtitled films at the moment as it continues its limited big city run — and Danish discovery Claes Bang has been cast as the villain in the next “Girl with the Dragon Tattoo” installment.

A big drop in theaters for this biopic of Lyndon Johnson as it quickly winds down after Rob Reiner’s film received mostly disinterest in a competitive time period.

This 1960s nun in training against the backdrop of change in the church story continues to attract minor interest as it slowly expands.

Todd Haynes’ childhood fantasy will struggle to get much above $1 million despite strong reviews for this Amazon film.