Plus, Rachel Bloom, the show's songwriters, actors, and choreographers all explain how the song and this week's 1960s fantasy sequence came to life. 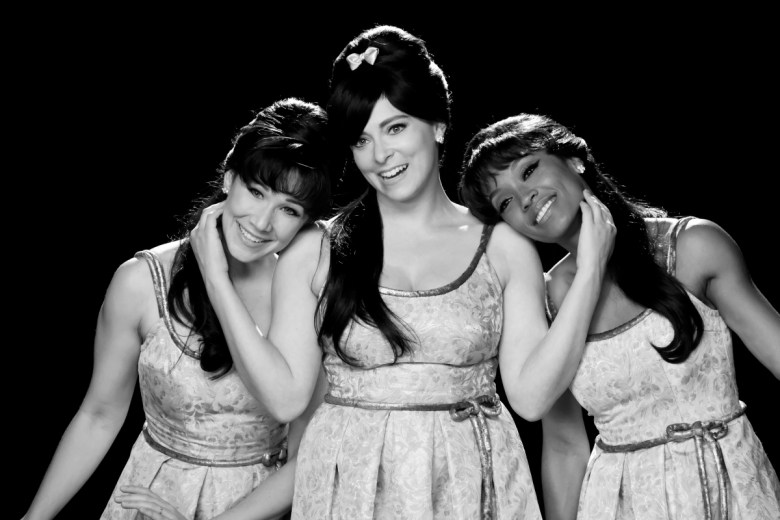 Watch the “Maybe She’s Not Such a Heinous Bitch After All” on mute, and it looks like one of the happiest things “Crazy Ex-Girlfriend” has ever done. But as with the rest of the musical sequences on the show, there’s always more behind what Rebecca Bunch tells herself.

There’s Rebecca (Rachel Bloom), just off one of the lowest points in her life, finally being OK with moving back home and living with her mom Naomi (Tovah Feldshuh). As she starts to accept Naomi’s sudden change in attitude, complete with homemade milkshakes and TV-watching cuddle sessions, her thoughts take the form of a Ronettes-style, Wall of Sound tribute. Singing the song takes her from Naomi’s living room, straight through to a black-and-white TV performance, with a pair of backup singers for good measure.

IndieWire was on set for the filming of “Maybe She’s Not Such a Heinous Bitch After All” and spoke with a number of the people involved in ushering the song throughout the creative process. All had different insights on various stages in the process, but one common theme throughout these conversations was the lingering darkness underneath that glossy sheen.

“It’s a lighter melody, but you’re saying some very, very dark things,” Bloom said. “I think this song is an anthem for anyone who’s had a dysfunctional relationship with their mother, which I think is everyone.”

Still, as the fantasy Ed Sullivan world makes its way into Naomi’s living room, Aline Brosh McKenna said that there’s still some hope in it.

“That’s why there’s so many songs in this genre about wedding bells and getting married and finding the right guy, because there’s something very hopeful and aspirational about it,” McKenna said.

So how did this emotionally complex Ronettes tribute come together?

Most of the songs on “Crazy Ex-Girlfriend” are studies in contrasts. For Bloom, having a song with the lines “I used to think my mother was the worst / That if she didn’t kill me, I’d kill her first” needed a peppy, light style for the overall joke to land.

“We had the idea for a while. I remember the day I thought of this idea, of doing a happy musical theater song, ‘Maybe She’s Not Such a Bitch,'” Bloom said. “Well, what are some other happy genres? I had been listening to a lot of Ronettes and I thought, ‘Oh my God, that would be perfect.’ You don’t get happier than Ronettes, the big Phil Spector full sound.”

As Bloom sharpened the tune during an all-day, girl group listening binge, she matched some lyrics to the piano melody she’d been working on.

“I knew that it was ‘Birds are singing / something something think / Spring is here, cause I’m starting to think,'” Bloom said of her lyrical starting point for the pre-chorus. “You want to surprise people with what the hook is. So writing the first verse of any of these comedy songs is writing in the genre, so that we can come out with that chorus and really punch you in the face with it, ideally.”

Once Bloom had the full demo package, she handed it off to “Crazy Ex-Girlfriend” music producer and songwriter Adam Schlesinger, who retooled the chords and melodies and added in that signature kickdrum beat. To match the tone and feel of its predecessors, Schlesinger brought in even more instruments than usual for the recording session.

“This is one of our biggest and most-involved live records. And you hear it in the track. It’s just such a full sound,” Bloom said. What really locked in the idea for the “Crazy Ex-Girlfriend” songwriting braintrust (Bloom, Schlesinger, McKenna, and writer Jack Dolgen) was hearing the bridge of the song nailed down, the part that starts, “I know it sounds like I’m falling in love…”

“It was really from listening to a lot of these genres, that they’re so infatuated. We have to call this out, that someone’s singing a song about their mother that sounds very romantic. That was the key to this bridge, which is more poignant than funny than sometimes we do, which I like,” Bloom said.

For McKenna, having that part of “Heinous Bitch” really helped inform the shaping of the rest of Naomi and Rebecca’s moments together outside of the musical number.

“The bridge of the song is very signature Rachel, how she explains how your mother is your primary love relationship. That’s not actually strictly to genre, but it was something that Rachel and I had been talking about since Day 1, showing that mother experience is a formative experience. So at a point in her life where she’s in a very low place, revisiting that relationship makes a lot of sense,” McKenna said.

When Bloom sang through the basic idea of “Heinous Bitch” in the writer’s room, it was one that got a particularly strong consensus from all four writers in the song approval process.

“They go through the wringer, in terms of quality control. This one sailed right through,” Dolgen said.

The Dance Moves (And One That Didn’t Make It)

The process of honing the dance moves for a video like this is an organic process, one that happens in stages. For her initial ideas, “Crazy-Ex” choreographer Kat Burns went to the source.

“I looked back at their actual choreography and they’re not really in sync. They’re spastic in a really, really fun way. But the movement is what we would consider current-day kind of awkward. They’re almost triple time. There’s a sock-hop feel that they had back then and their whole bodies kind of wiggled,” Burns said. “[Rachel] was like, ‘I don’t think it should be that wiggly.’ The lead girl in the Ronettes didn’t do matching choreography. She did her own thing. Rachel wanted it to be a little more unison, more simplistically styled.”

Burns worked that streamlined style into something that she says Bloom picked up in two quick 10-minute sessions. Working with assistant choreographer Dana Wilson (who plays one of the backup dancers in the sequence, alongside Dominique Domingo), a big challenge was finding some of the finishing details, like the movement for the line “But like one of those evil, haunted dolls.”

“I got lost into what my fingers would do, just ‘What’s a doll hand?’ I kept changing my fingers. I totally tuned out and was playing with my fingers and I looked totally possessed for a few minutes,” Burns said. “But, to me, that’s what makes it interesting are those little details, like surprise little giggles.”

On the day of the shoot, Burns, Bloom, Wilson, and Domingo rehearsed in the show’s mini dance studio, just a short walk from the soundstage they shot the final product on. After choreographing all of the over 90 sequences the show has done so far, Burns says that she understands that the work shows up in the final edit, even if all the moves don’t.

“The script is really specific about the reality world vs. the dance performance world, so what I tend to do is overchoreograph and then let them decide what they want in editing,” Burns said.

One cutting-room-floor casualty this time was a very particular move on the line, “So weird you lived inside her,” where Wilson and Domingo step forward, doing a scooping motion with their hands. It may not have made the final cut, but it’s what let Burns know that she had a solid idea.

“If it kind of makes us feel gross, we know we did it right,” Burns said. Because the blend of the fantasy and real worlds had to be so precise, much of the trick for episode director Stuart McDonald and the rest of the production crew was getting the precise sightlines and spacing right on that composite couch shot. Too far away and the stretching of the image it would take to match Tracksuit Rachel would distort the black-and-white portion. Too close and it looks like Rachel is being haunted by ghost giants with Ronnie Spector hairdos.

“There are a lot of ways that we did this transition,” Bloom said of the pre-planning stage. “But this was Stuart’s idea. There was a version where I never went into 1960s dress and just stayed in this tracksuit. But he had such a good idea to do this that it ended up working.”

The team shot multiple versions of the closing shot of Rebecca nestled on Naomi’s lap. Some had Bloom lip-syncing looking straight into camera, but the final version locks in the idea of where exactly this number is taking place.

“He had this notion of juxtaposing the black-and-white and the color and the two sides and it was a great way of getting in Rebecca’s brain. So he presented it at our concept meeting and we were like ‘That’s great.’ So he ran with it. He’s very detailed and enthusiastic when he has an idea. I think it came out great,” McKenna said.

“Heinous Bitch” is a Rebecca song, but the sequence doesn’t work without the right dose of Naomi. The playful bit of tossing each other popcorn came from an on-camera improv session where McDonald let Bloom and Feldshuh do what came naturally as a means for intro-ing the song. He had the pair be “loving,” then “goofy,” then “ordinary.” The final product is a bit of a blend of all three.

“The set, like Rachel, is good-natured. It’s funny and it’s easy, because Rachel’s easy. Rachel isn’t anxiety-ridden. There’s a sense of creative joy and not having penalties for goofing up,” Feldshuh said. “Rachel has no boundary issues, so her mind and her genius go all over the place.”

Part of telling that story and capturing the atmosphere of Rebecca’s relationship with her mom came down to the dancers in the video, too.

“It’s fun that a lot of the dancers that I get to hire have real acting moments,” Burns said. “Their intentions matter as much to Rachel as Rebecca’s intention. She doesn’t think of them as background. She thinks of them as equal storytellers, which is cool.”

Occasionally, the writing staff will have an alternate version of the song for all the parts that couldn’t get past The CW Standards and Practices department. Bloom explained that her original title had a much harsher alternate for “Bitch” before the team quickly decided against it.

“‘Heinous Bitch’ is just as strong as anything else. We thought about doing a dirty version, but we really didn’t need it,” said Dolgen, who also wrote Friday’s episode, “I Never Want to See Josh Again.”

The song speaks for itself, right in the heart of a season when Rebecca is systematically challenging everything she knows.

“Crazy Ex-Girlfriend” airs on Fridays at 8 p.m. ET on The CW.

This Article is related to: Television and tagged Crazy Ex-Girlfriend, Rachel Bloom, The CW