Cinematographer Anthony Dod Mantle had to figure out how to shoot the "flickering psyche" of a young girl in Cambodia's Best Foreign-Language Oscar entry. 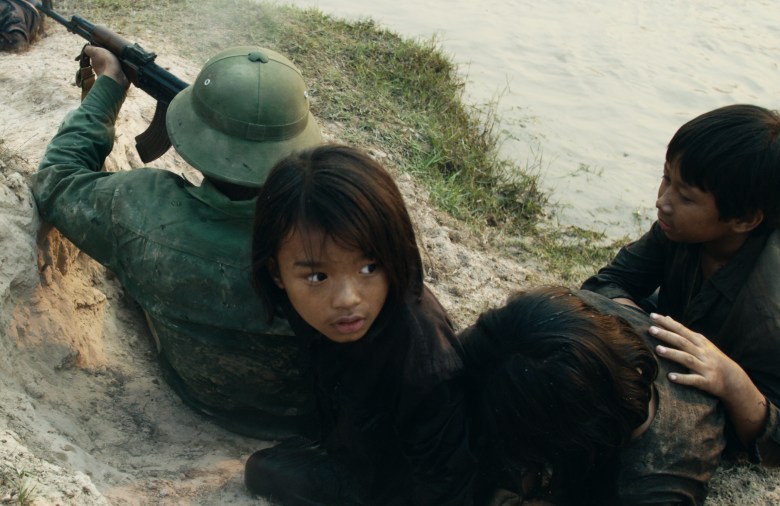 When Angelina Jolie needed a new cinematographer on the eve of shooting “First They Killed My Father” (Netflix), Cambodia’s Best Foreign-Language Oscar entry, the director called on the DP she wanted in the first place: Oscar-winner Anthony Dod Mantle (“Slumdog Millionaire”). It turned out to be a trial by fire of the most creative kind.

Based on the celebrated memoir by Loung Ung, who, with her family, was forced into a work camp by the Khmer Rouge at the age of five, the historical thriller was shot totally from her perspective.

“I only had three days of prep and the first background action had a crowd between 400 and 600 extras,” said Dod Mantle, who’s presenting the film this week in competition at the 25th Camerimage festival in Bydgoszcz, Poland.

Shooting with the Sony F55 with lots of hand-held and Steadicam shots, Dod Mantle first learned to adjust to the rhythm and behavior of the wonderfully expressive Sareum Srey Moch, who portrayed Ung.

“The hardest thing for Angie, for me, and for the whole crew was just trying to get the damn camera and the language of the film to work successfully from that point of view of this young child,” Dod Mantle said. The cinematographer shot Moch’s scenes first: What she looked at and turned away from, whatever she did, capturing the character’s “flickering psyche.” If there’s an underlying warmth to it, that’s because it’s told from her POV.

“She led a sheltered, comfortable, colorful life,” said Dod Mantle. “Slowly and systematically the Khmer Rouge took the color out of everybody’s lives. To start with color, and then slowly pull it back as a palette was what we tried to do. And, gradually, the only colors left were the red, black, and charcoal of the Kymer Rouge set against the backdrop of the rainy season and the monsoon skies of Cambodia.”

A Journey of Memory and Indoctrination

The introduction of Ung was shot as one long tracking shot through her home in Phnom Penh and out onto the balcony and street below, with the arrival of the the Kymer Rouge. But during editing they added a few cuts. “The colors suggest the beauty and warmth of the Far East, the calm before the storm,” Dod Mantle said.

When forced into village huts, the hungry middle-class youngster dreams about an opulent banquet. “It’s a little feast of color and her psyche’s confused,” added the cinematographer. “You have this mixture of the domestic paradise of her home and all the food that she could possibly imagine, so it was an interesting idea to amalgamate the hell that she was living and the
home that she missed.” One of the highlights was saying goodbye to her father, who’s taken away to be killed by the Kymer Rouge. First, Ung eavesdrops on her parents. She doesn’t know what they’re saying but realizes it’s something terrible.

“Then he comes out and he mans himself up and tells everyone to be brave,” said Dod Mantle. “And he stands in her point of view and looks down at her and is back lit [by the sun] and we know this is one of the last times we’re going to see him alive. Then they embrace and we had to break out of the point of view, so what we decided to do was keep the flare coming in and embody the father and daughter for a moment there. And then we track back and return to her POV as she watches him slowly walk away. And she calls for him and it’s sad.”

For Dod Mantle, in addition to telling Ung’s tragic story, including her indoctrination as a child soldier, the movie’s an allegory about looking after our children. “It’s a super intelligent attempt at helping the world think about how we can lose our children,” he said.

This Article is related to: Awards and tagged Angelina Jolie, Anthony Dod Mantle, Best Cinematography, First They Killed My Father, Oscars, Top of the Line